Probably only the killers know who murdered Jimmy and Lilly Ming, but there was a flurry of disturbing rumors after police discovered their dismembered bodies stuffed into canvas sacks on a lonely stretch of the Squamish Highway north of Vancouver last month. The Vancouver Sun, citing “anonymous sources in the Chinese community,” linked the murders with a Vietnamese youth gang. Then, Vancouver Mayor Michael Harcourt declared on television that the murderers were “Vietnamese thugs of Chinese extraction” and “public enemy number 1.” That led to emotional denunciations of the mayor and the media by members of Vancouver’s Vietnamese community, which police supported by denying the existence of evidence implicating the gangs. To quell the rumors, police refused further comment. Still, it has focused attention on the growing incidence of gang violence in the city’s normally peaceful Asian community. Jimmy Ming, 29, and his 30-year-old

wife were the victims of a bungled kidnapping and extortion scheme designed to extract a $700,000 ransom from his father, Ping Chang Ming, a Vancouver restaurant owner. And despite their caution, police are clearly taking extraordinary measures in their investigation of the crime. Eight city detectives are working on the case full time, aided by four members of the Squamish RCMP. The police have also posted a $10,000 reward for information leading to the conviction of the murderers, matched by another $10,000 from the Chinese Benevolent Association of Canada.

Last fall Vancouver police launched a crackdown on the gangs, which resulted in 29 charges. And before the recent press embargo they revealed that there are as many as eight different gangs in the city, with a total of about 100 members. Police spokesmen have implicated the gangs—the names include the Red Eagles, Lotus and Viet Ching—in extortion, gambling and drug importing. Depending on the gang they belong to, members are either ethnic Chinese, ethnic Vietnamese or Vietnamese of Chi-

nese extraction. Aged between 14 and 25, their common gathering places are pool halls, nightclubs and restaurants in Vancouver’s east end. And although most of their activities are restricted to the boundaries of Vancouver’s Oriental community, police said that they also maintain ties with other Asian gangs in Edmonton, Calgary, Toronto, San Francisco and Hong Kong.

Police suspect gang involvement in 32 offences over an 18-month period ending in 1984. In November, 1983, a brawl outside a high school involving knives and clubs resulted in the arrest of Herman Lam, 21, described in court as a ringleader of the Lotus gang. Lam was jailed for four years, and two accomplices, Ricky Tang, 20, and Edward Jung, 22, each received two years less a day. In April, 1984, a masked gunman shot and killed Kenneth Yang in an East Hastings Street pool hall and escaped through a back door. In October, 1984, Daniel Da Long Chen, identified as a member of the Red Eagles, pleaded guilty to a charge of extorting money from a Chinese restaurant employee and was jailed for one year. In January he received an additional four-year sentence for possession of a dangerous weapon in connection with a machete attack on patrons of a downtown nightclub.

Asian gangs are not a new phenome-

non in Vancouver, but suggestions of a war between established gangs and the Vietnamese newcomers, waged with the help of lethal weaponry, have aroused the concern of police and community workers. Philip Jones, a youth worker at Britannia Community Services Centre, noted that weapons confiscated in recent neighborhood battles included switchblades and spiked clubs.

Some social workers blame violence on the trauma-filled backgrounds of the young gang members. The profile of Southeast Asian refugees coming to Canada has changed since the initial wave of Boat People in the late 1970s, according to Lorraine Cameron, who worked in refugee camps in Malaysia and Singapore and is currently writing a thesis on the problems of refugee youth. Said Cameron: “There are a lot more young, single men now.” She added that many of the youths were raised in the streets of South Vietnam without benefit of a family structure, drafted into the Vietnamese army at early ages and left to wander aimlessly for much of their formative years. She said that legacy, in addition to the privations of the refugee camps they inhabited for as long as five years, left an indelible impression on the youths. Annie McKitrick, a former community worker in refugee camps in Thailand, agrees with Cameron. Declared McKitrick: “The young refugees

learn to live by their wits. They learn that it doesn’t matter what the law says anymore, you do what you have to do to survive.”

Cameron and McKitrick say the youths represent a new problem which current social programs cannot solve. Said Cameron: “There is a real need for people to be working the streets.” There are now only two part-time workers directly involved with Vancouver’s Asian youth. Their job is to seek out troubled teens and attempt to steer them away from the gangs, a task complicated by the lack of real career options available to many of the youths. Because many have only rudimentary English, it is impossible for them to get satisfying employment or to pursue their education past high school. Elizabeth E.S. Lee, 55, vice-president of Success, a Chinese social service group, said: “These kids are really out of the mainstream. They are prey for whoever can teach them how to get a buck.”

No one knows whether it was the lure of easy money that led to the murder of the Mings, although many of Vancouver’s Chinese say they believe that it was. If there is anything to be salvaged from the brutal slayings, it may only be the light it has shed on a festering problem previously confined to the shadows and back alleys of Vancouver’s gritty east end.;ÿ 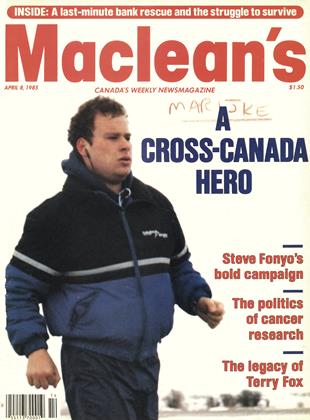