The company’s promotion is simple and appealing: Herbalife dietary supplements can make a person slim and wealthy. And Mark Hughes, the handsome 29-year-old founder of Herbalife International Inc., of Los Angeles, Calif., spares no effort in selling his creation. Hughes regularly purchases twoand three-hour time slots on U.S. cable networks to preach the Herbalife gospel of trim hips and fat wallets. The shows resemble fundamentalist revival meetings, complete with testimonials from thin, rich customers. And they work: worldwide sales last year were $512 million, and the company plans to exceed $1 billion in 1985. But before it achieves that, Herbalife will have to leap several hurdles. Next month lawyers for Herbalife Canada Ltd., the company’s wholly owned Calgary-based subsidiary, will appear in a Montreal court to face 24 charges of misrepresenting products and misleading customers. And in California company attorneys are battling a consumerprotection lawsuit launched in March by three state agencies.

Officials on both sides of the border

are attempting to prove that Herbalife’s medical claims for its products are false. In addition, the California attorney general’s office is charging that the company is an illegal “endless chain”—or pyramid—selling operation that distributes its products directly to customers, who in turn are encouraged to become salesmen. Said David Addis, a lawyer for Herbalife in Washington, of the charge: “I am not saying their positions are without merit. I am saying we have not done a good enough job of explaining who we are and what we are doing.”

The Canadian charges follow a six-month investigation by Health and Welfare Canada. Many of them relate to Herbalife’s recommendations on the proper use of Formula 1, its main weight reduction product. Victorin Bolduc, the regional director of the health protection branch in Montreal, said the investigation indicated that Formula 1 was safe

and that it met Canadian requirements for a powdered meal substitute if users followed directions. Added Bolduc: “It will not hurt people if they are not sick already.” But the so-called Herbalife Career Book, which new salesmen must purchase as part of a package containing samples of Formula 1 and related products for about $50, stresses that a variety of other company products should be consumed along with Formula 1.

A 1982 edition of another Herbalife career guide is at issue in the California lawsuit. Stuart Richardson, chief of the food and drug branch of the California state department of health services, told Maclean’s that his department’s concerns relate to claims made about Herbalife’s Formula 2. Richardson said the book says that it can cure more than 80 illnesses, including arthritis, herpes, gout and senility. Said Richardson: “They call it the miracle worker. They say you can take the product to lose weight if you are overweight or if you are underweight to gain weight.” According to Addis, the Herbalife book has been replaced by editions that do not make those claims. He acknowledged that Herbalife has not recalled the 1982 edition, but he said that is unnecessary because salesmen are not using it. California officials disagree. Declared Richardson: “It is remarkable that a rather broad section of the population is participating in this. You would think that common sense would prevail.”

According to Herbalife spokesmen, the sales base is indeed broad. Hughes claims to have attracted 700,000 customers—or “distributors,” as the company prefers to call them—in the United States, Australia, the United Kingdom and Canada. Some distributors, such as Calgary’s Larry Shine, boast $100,000 monthly incomes from Herbalife sales. The success of Hughes’s venture is evident. Last year he paid a whopping $7.2 million in cash for a mansion in the prestigious Los Angeles suburb of Bel Air.

And he is fighting the charges against him. In December, Herbalife sued the U.S. Food and Drug Administration and the U.S. department of health and human services—both of which had criticized the company—charging that government regulators were waging a “corrupt trial by publicity” against it. Said Hughes: “What we [are selling] is good nutrition. I know what our products stand for and I could care less what the media thinks.”^ 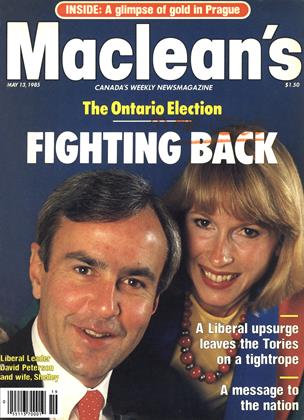