Antidotes for the new-parent jitters once came from knowledgeable aunts and grandmothers who had weathered colicky squalls and nasty rashes and survived to tell about it. But the advent of the mobile nuclear family created a demand for a new kind of child care advice, and in 1945 Dr. Benjamin Spock’s Baby and Child Care revolutionized child-rearing attitudes with its insistence that children should be treated with respect. But the baby expert who commands the deepest loyalties of many current new parents is Texas-born T. Berry Brazelton, a gentle Cambridge, Mass., pediatrician and Harvard Medical School professor. His four books, research and teaching have built on Spock’s pioneering work and influenced a generation of child care professionals.

Enjoy: Extending Spock’s teaching to encompass the entire family, Brazelton’s message is that parents must follow their own instincts, relax and learn from their children. Infants and Mothers, which appeared first in 1969 and in a revised edition in 1983, explored the development of babies in detail, but above all it reassured parents whose nerves had flagged. “The first baby is such an experimental proving ground that few mothers can enjoy their first unequivocally,” he cautioned. In Toddlers and Parents and On Becoming a Family, Brazelton wrote, “A parent must understand his own reaction to the child as well as the child’s behavior.”

Brazelton also enjoys fame in the medical community for his work with premature and undersized babies, for his comparative studies of the childparent relationship in other cultures and for the sheer sensitivity of his perceptions about the infants with whom he has worked personally.

Indeed, many parents who have never heard of the 67-year-old pediatrician have benefited from his research. For one thing, the Neonatal Behavioral Assessment Scale, usually called simply “the Brazelton,” is a test that gauges an infant’s reactions to a series of stimuli as an early indicator of developmental problems. Brazelton began developing it about 30 years ago when he realized that doctors were unwilling to certify babies as “normal” for adoption proceedings until they were several months old, a delay that he said was detrimental to both babies and adoptive parents. Underlying the Brazelton philosophy

is a theory that fits well with the conservative 1980s: that the lost world of extended families and stay-at-home mothers was in many ways a better place to bring up children. “We have lost the closeness of one generation to the other,” he says, although his books transcend nostalgia with solid, sympathetic advice for working mothers, single par-

ents and disturbed families. Indeed, his efforts to “find ways to replace the extended family” through adequate day care and parenting groups have thrust him into the U.S. political sphere.

Pressure: Brazelton was also instrumental in setting off a revolution in the way that pediatrics are taught, by criticizing medical schools for concentrating too heavily on childhood diseases that such advances as antibiotics and vaccines had largely controlled. Instead, he is urging them to prepare doctors for the social aspect of their practices and the developmental care of what Brazelton I calls “well babies.” Brazelton’s new po-

sition as the president-elect of the Society for Research in Child Development will likely enable him to put more pressure on medical educators. But, he said, “This profession is notoriously resistant to change.”

As a child in Waco, Tex., Brazelton’s love of the Doctor Dolittle books inspired him to choose a career as a veterinarian. And despite his change of heart, he retains a Dolittlian ability to communicate with the small preverbal patients in his practice. But his disaffection with traditional medical training began early. Said Brazelton: “I wanted to understand human beings, and all we were

learning about was disease.” He was encouraged after reading Spock’s book. “He became a hero to me,” Brazelton said. “Medical school had in no way prepared me for the problems of real mothers with healthy children.” Brazelton’s talent for reassurance may ease the concerns of even the parents of teenagers. Although they were temporary, Brazelton frankly acknowledges that he had difficulties with his own four children as teenagers. But that honest appraisal of both the j oys and the perils of parenthood—a duality that informs each of his books—is the touchstone of the Brazelton mystique. 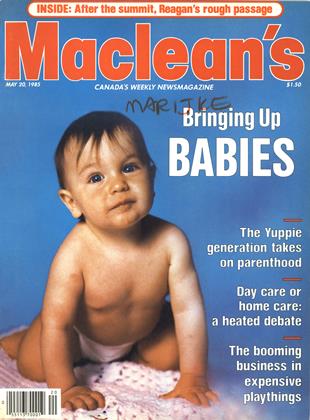