Face to face, Robert Mundell seems an unlikely man to shake the powerful. Soft-spoken, pale and rotund, his lank, greying hair hangs well below his rumpled collar. Mundell, at 52, more closely resembles the stereotype of an eccentric recluse. His Manhattan apartment is cluttered with books, antique bric-a-brac and nearly 200 oil canvases that he has painted in recent : years. But Mundell has been rocking both the theories and the practice of I economics in the United States and beyond for more than two decades. He has a mind to do the same in Canada.

His academic career has carried him from a one-room schoolhouse near Kingston, Ont., to the universities of British Columbia and Washington State, the Massachusetts Institute of Technology and the University of Chicago. Since 1974 he has been the star of the economics department at New York City’s Columbia University. He is the guru of the “supply-side” economic theories that have inspired the administration of President Ronald Reagan—and which Mundell declared in a Maclean ’s interview could cure the economic ills of his native country.

Keynes, who 50 years ago stressed the management of public and private spending power—the demand side of the supply-and-demand equation—to promote economic well-being. He likewise upsets the rival monetarist school under Milton Friedman—his former teaching colleague—which emphasizes control of the money supply and borrowing power to discipline an economy. Mundell is also widely accused of espousing elitist tax reform policies which cater to the wealthy on the ground that their investments eventually benefit everybody. It is a theory that Harvard economist John Kenneth Galbraith, a fellow Canadian native born in Iona Station, Ont., but a Keynesian, once ridiculed as “the horse and sparrow theory: if you feed the horse enough oats, some will pass through to the road for the sparrows.”

Mundell rejects the charge that his tax ideas work against poor or middle-income people as “a completely false notion,” insisting that any top tax rate higher than about 30 per cent discourages productive growth.

In defiance of his critics in the economic establishment, Mundell has attracted a host of articulate and influential disciples—many of them Reagan Republicans and among them University of Southern California business Prof. Arthur Laffer, New York congressman Jack Kemp and The Wall Street Journal. And through their advocacy Mundell’s supply-side theories buttressed both the Reagan administration’s dramatic first-term tax cuts and the current wave of tax reform proposals in Washington. Indeed, Mundell is credited —and blamed—for exerting more impact on current U.S. policy than any other economist of his generation. Any economic planner now must at least reckon with Mundell’s ideas. And his continuing behind-the-scenes influence in Washington has powerful implications for the government of Brian Mulroney as it grapples with a stubborn budget deficit and high unemployment.

prodded Mundell to sketch out the elements of supply-side theory. At a 1971 conference of economists in Bologna, Italy, he shocked both Keynesians and monetarists by proposing that the cure lay in combining stimulative tax cuts with restrictive monetary policies. The “Mundell mix,” in short, pointed fiscal and monetary policies in opposite directions—and against the orthodoxies that regarded tax cuts as inflationary and tight money as restricting production. But he argued that lowering tax rates would stimulate investment and job creation; tight money would encourage savings and curb credit-spawned inflation. Mundell’s tax prescription focused on the “supply side”—goods producing businesses and businessmen themselves. If inflation was caused by too much money chasing too few goods, Mundell insisted, the solution was to curb money growth on one hand and spur output on the other. That policy and a belief in an international monetary order of fixed currency exchange rates pegged to gold have been Mundell’s main themes ever since.

Wisdom: And if his efforts to revive a modified gold standard have so far found few supporters in Washington, Mundell’s stress on cutting the highest level of tax rates to increase incentives has become the dominant Washington wisdom. All the major current U.S. tax reform proposals agree on dramatic cuts in the top rate of U.S. income taxes to 30 per cent or less from the current 50-per-cent marginal rate. Mundell told Maclean's that Canada already lags in tax reform, and further U.S. rate reductions would make action by Ottawa “absolutely imperative.” Without matching cuts in Ottawa’s top tax rate, Mundell argued, the unequal tax regimes would make Canadian industries uncompetitive and speed up the flight of Canadian capital to low-tax U.S. havens.

In line with Mundell’s emphasis on tax reform, and mindful of Mulroney’s pledge to reduce the federal budget deficit, the economist said that fixation on the budget deficit could be “disastrous” for Canada—if it prompted tax increases. “By all means there should be efforts to move toward a more austere stance on government spending,” he said. “But given the demand for government programs, tax revenues will have to increase.” He insists that the best way to boost revenues is to lower Canada’s top rates of taxation. Over time, he contends, lower tax rates will stimulate investment, output and employment, ultimately raising more revenue from a revived economy. Said the supply-side guru softly: “Canada’s unemployment rate is absurdly high. If all Canadians who are willing to work were working, the gross national product would easily be high enough to close the budget gap.” 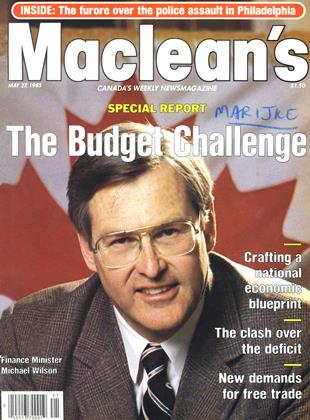