A lonely journey back from defeat Terry Hargreaves June 10 1985

He strides athletically, but almost anonymously, through the airport departure lounge. He

clenches his boarding pass in his teeth and carries his own suitcase. Once aboard the aircraft he settles into a window seat, takes off his jacket and begins to read, interrupted occasionally by fellow passengers anxious to say hello. The white-thatched head swiftly swivels—the squash player looking for the back-wall rebound—and John Turner grasps a stranger’s outstretched hand, holds it for 30 seconds of blue-eyed contact and the familiar staccato voice rattles out the ritual greeting: “Hiya. Good to see ya.”

So began another arduous weekend of travel for Liberal Leader John Turner, who has undertaken more than 100,000 km of political fence-mending since Brian Mulroney’s Conservatives resoundingly ended his 2 V2-month stint as Canada’s 17th Prime Minister last Sept. 4—not, as he dryly tells audiences, “one of my red-letter days.” Since then Turner and the federal party he leads have struggled through a period of mutual and collective catharsis as the Liberals strive to recover from their worst electoral defeat since Confederation. By the end of May Turner had met with all but 10 of the officials representing 272 of

the Liberals’ 282 riding associations to discuss plans for resuscitating the battered party. The party has welcomed his progress through receptions, coffee parties and banquets across the country. Declared Lloyd Axworthy, the Liberal member of Parliament for WinnipegFort Garry and transport minister in the Turner cabinet: “The effort is appreciated. This party hasn’t been hugged in a long time.”

Once freed from the political confines of Ottawa and the rigors of House of Commons debate, where Turner’s performance often appears awkward and stuttering, the Liberal leader seems more confident. His speaking style is sharper and more effective than it is in Ottawa, and Turner clearly enjoys meeting people on their home ground. Moreover, as a British Columbia party worker put it after getting a chance to meet Turner for the first time, “he looks younger, and his eyes don’t bug out like they do on TV.”

But Turner knows that he faces a long battle before he can ever hope to win his way back into office as Prime Minister. On the first leg of a trip last month that eventually took him to Vancouver, Turner spent his first day in Saskatoon meeting with Liberals who serve on the party’s Northern and Western Council and giving a noon speech to the Canadian Club. Early that morning Turner,

along with Saskatchewan Liberal Leader Ralph Goodale, a former federal MP who was defeated in 1979, strolled along the banks of the South Saskatchewan River chatting, like two indigent farmers brooding on the next harvest, about the party’s prospects in the Saskatchewan election which is expected within a year.

Though Goodale’s Liberals face an uphill battle against Conservative Premier Grant Devine’s government, there are grounds for Liberal optimism elsewhere in the country. In last month’s Ontario election the Liberals topped the popular vote and almost certainly will emerge as the governing party this month; in Newfoundland’s April 2 election Liberal strength increased in the house of assembly from four to 15 seats; and there is the prospect that Robert Bourassa’s Liberals could win the next Quebec election. But with at least three years to go before another federal election is called, and with Mulroney and his massive Tory majority still riding high in the opinion polls, Turner, noted a close friend, is “very realistic; he knows it’s a long haul.”

Still, Turner manages to be both ebullient and realistic when he goes on the road. Typically, Turner—reworking one of the late John Diefenbaker’s lines —admitted in his speech before the Canadian Club that “on the Prairies the

only thing keeping us Liberals alive is the game laws.” And he went on to admit past error. “The Liberal party lost the confidence of Western Canada,” said Turner. “There was some truth in the suggestion that this party was being run from Ontario and Quebec.” Recognizing a member of the audience —former Saskatchewan attorney general Roy Romanow, a New Democrat who was defeated in the 1982 provincial election—Turner remarked lightly but with an underlying seriousness: “Roy, we live under a tolerant God. It’s never too late, and even at the final day there is forgiveness.”

The Liberal leader is venturesome, yet cautious. Walking through downtown Saskatoon—at lunch he called the city “one of the jewels of North America” and sounded as though he meant it—Turner talked about his nonpolitical life. While Turner is currently living in Ottawa’s Chateau Laurier Hotel during the renovation of Stornoway, the official Ottawa residence of the opposition leader, Turner’s wife, Geills, lives in the couple’s Toronto house with two of their four children. Geills visits her husband occasionally in Ottawa, while Turner tries to spend one weekend a month in Toronto.

For years Turner and his family have made summer canoe trips through the Northwest Territories, and they hope to do so this year. The trips are planned with the precision of military expeditions. “We leave three sets of maps marked with our route behind with various authorities,” he explained. “As well, I always carry one of those small portable radios that can contact airliners on the transpolar route overhead. We call Lufthansa or KLM or whatever and give them our map co-ordinates each day to pass on to Yellowknife, so if anything goes wrong they can pinpoint us.”

Turner’s innate caution extends to journalists. Turner unwinds with some of the veteran political reporters whom he has known for years, but he shies like a nervous stallion from the thrusting microphones and pointed questions of the newer breed of reporter. Turner loves to reminisce, so much so that it sometimes appears that he enjoys the past more than he is excited by the future. Sipping a scotch one night in a Kelowna, B.C., restaurant, Turner recalled the early 1960s—when former Conservative prime minister John Diefenbaker was in office and Turner was an apprentice Liberal MP—as a kind of golden age of Parliament, a time when there were foes to fight and heroes to admire across the House of Commons floor.

Today, as Turner learned when he emerged from an eight-year stint as a corporate lawyer to claim the Liberal leadership last summer, 30-second tele-

vision clips that mercilessly expose mannerisms—like the habitual throatclearing that Turner has now largely brought under control—can help to make or break a political career.

Turner is gradually relearning the political skills that he will need in the months and years ahead. In Kelowna he met with one-legged runner Steve Fonyo, who was staying at the same\

hotel during his cross-country journey to raise funds for cancer research. The next day, when he talked to students at the local high school, Turner used the chance encounter to state his personal credo. Fonyo’s saga, he declared, “shows what a young person can do when he has a dream, when he has a cause,”—and then Turner’s voice grew tougher and more challenging—“and when he has

the guts.” Added Turner: “If you have good health, have been given a good education, and you have done fairly well in life, you have a duty to serve the public.” He ended the session by donating a biography of himself to the school library—“It’s not selling too well right now,” he joked—and the applause rolled across the gymnasium.

At other times, Turner played the more conventional political game of attacking his principal opponent. Referring to Mulroney’s high standing in the opinion polls, Turner told a Liberal audience at the Rivershore Golf and Country Club in Kamloops, B.C., that “popularity can’t be husbanded, stored, put away in a sock. Mulroney wants to be loved. So do I. I sure as hell wish more people had loved me in 1984, but you have to make decisions and some people won’t like them.” He heaped sarcasm on Mulroney, calling him a “barefoot boy in Gucci shoes” and accusing him of “singing for his supper with the Americans —‘Yes, sir, Mr. President,’ says Mulroney. ‘Whatever you say, Mr. President.’ ”

The next day Turner headed for Vancouver and his own Quadra riding, which he won in September with a comfortable 3,213-vote majority. Turner attended a sail past of 400 sailboats at the Royal Vancouver Yacht Club, then boarded a chartered plane for the 17-minute flight to Saltspring Island, where he visited his ailing mother; a victim of Alzheimer’s disease, she still does not know that her son served for 80 days last year as Prime Minister.

As well as helping to rebuild the Liberal party’s fortunes, Turner’s wanderings have a personal purpose: he needs to gain support from local party workers in preparation for the Liberal convention scheduled for the fall of 1986, when the party will vote on whether to hold a leadership review. Delegates could, conceivably, reject Turner’s efforts and vote in favor of finding the party a new and more dynamic leader. Turner’s position in the party is growing stronger because of his efforts at the grassroots level—and because, so far at least, there is no obvious strong alternative contender.

In the meantime, John Napier Turner, a more relaxed and more engaging man than when he conducted his disastrous political campaign 10 months ago, is waging a lonely battle against formidable odds. One of the most obvious problems facing Turner, particularly in the West, is the residue of bitterness left by the Trudeau years, and the feeling that Turner is a holdover from that era—and a political loser as well. But Turner may gradually be changing that view of himself. As a Kelowna businessman noted: “Turner can’t be all that bad, you know. Trudeau hated him.”&l£> 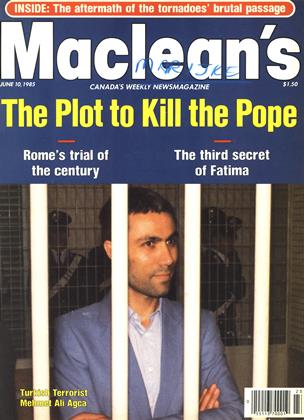