The sacking of a genuine star Allan Fotheringham June 17 1985

One of the surprising things a Canadian who spends a lot of time in the United States finds is that there is a lot less TV available. Canadians, thanks to cable, get all the U.S. channels that Americans do. In addition they have the best of the CBC and whatever CTV offers. Canadians actually have more choice on the tube, and the overall selection is more varied and better. Radio, of course, is no contest. Any Canadian travelling in the United States by car and twiddling the knob in vain in search of something intelligent is in for a long journey. The mindless pap that passes for commercial radio in the centre of the free world quickly turns the mind into mush. What little “public” radio (i.e. noncommercial) is available is badly underfunded and amateurish. Once in America, one longs for the Holy Mother Corp., the Canadian Broadcorping Castration, the dear old CBC, bless its fumbling, wasteful heart.

Such a thing as Peter Gzowski’s witty, sensitive Morningside, spanning the whole country for three hours each weekday morning, would astound and mesmerize Americans. One of the first things a Canadian in Washington is told—as if passing on some secret code or a cache of marijuana—is that Elizabeth Gray and As It Happens can be found on the Washington public broadcasting dial at 11:00 at night. It is our furtive little hoard. People excuse themselves from parties on the old babysitting excuse and nip home so they can listen to the unmistakable throaty chortle of Elizabeth and find out what’s going on—not in Canada, but around the world. It has been available in Washington for just 20 months and already has 14,000 listeners.

And so what have the silly twits at the CBC done? They’ve sacked Elizabeth Gray, quite about the most stupid decision in years in an organization that has quite a record in stupidities. The excuse is that they want more of a “star” in her slot. Who? Lome Greene? Frank Mahovlich? Joan Rivers? It had always

been the impression here that Gray, along with Gzowski, were about the only stars CBC radio had. Her abrupt dismissal after four distinguished and hardworking years on the job makes you wonder if the CBC budget cuts did not also include a few cuts in the intelligence of those responsible for the decision. And I say this as someone who is a sometime employee of the place, in the pretty-face division. The CBC can be brilliant in its hiring (me) and stupendously stupid in its firing (Gray).

Barbara Frum made As It Happens famous, ranging the world for insightful

and tough interviews by phone, abiding no fool, accepting no bafflegab from some faraway tinpot tycoon. Elizabeth Gray has continued the tradition, a superb journalist who was made for radio and practically invented talk radio for the CBC when she was with its Ottawa outlet. When she first took the As It Happens job, she had to shuttle between Toronto and her husband and family in Ottawa, sacrificing a vital portion of her life for the Corp. In return, she gets a swift, impersonal notice that she won’t be around next season. Andrew Simon, the head of radio current affairs, argues that she wasn’t fired, it’s simply a case of “nonrenewal of contract”—the bureaucratic euphemism for what most people dealing with the English language would call the sack. He says he and his colleagues have been “noodling about for several months” and hints that they want someone more given to dashing about and dazzling at public appearances. We had always operated under the old-fashioned theory that

what the lady poured into the microphone was what counted. Apparently not. What is needed is a Madonna of the wireless, capable of glitz at the supermarket openings. It’s a unique concept, that radio personalities somehow must suddenly have to be teeth-and-hair clones of their TV cousins. Rawhide, one of the greatest CBC radio heroes ever, was beloved exactly because no one knew who he really was or what Max Ferguson looked like. Gzowski, in person, looks like an unmade bed and almost all his adoring female fans would recoil at the sight of him. It’s his voice that seduces them. As with Gray. The thought that she has to wear designer clothes to save her job, and sparkle at cocktail parties is not only absurd, it’s dumb. Spelled stupid.

It’s such a waste of talent, especially when seen from afar. As mentioned, the United States with all its riches, has a broadcasting system that is appalling to someone raised on the CBC. In the area of the pencil press, the U.S. has some superb newspapers, ranking with the finest anywhere. But once you get to radio, no self-respecting chap would be found dead in the system. Elizabeth Gray is a disputatious and vigorous lady in private (and presumably in story conferences) whose dress is as casual as her journalism is professional. One would never mistake her for a Tory. One wonders, in fact, if some nervous vice-presidents at the CBC are not looking over their shoulders at some of the mouth-breathers and wall-climbers in the new Conservative caucus who always viewed the CBC as a hive of pinkos and weirdos. There has long been a feeling among some Tories, mouldering in opposition all those long years BM (Before Mila), that the CBC somehow was in cahoots with the hated Grits, aiding their survival and supporting the reign of the Trudeaucrats. Now that they are in the throne room, the right wingers among Mr. Mellowrooney’s flock want to get some revenge on those perceived as their tormentors. Is the CBC trying to anticipate the purge by throwing out its own sacrificial victims? Giving the Tories a head or two on a platter as a means of assuaging the mob-think? 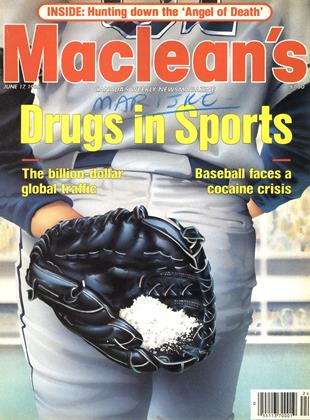