A tangled 40-year-old net slowly tightened last week around the “Angel of Death,” Josef Mengele. Each day evidence mounted that the world’s most wanted criminal, a man responsible for the deaths of 400,000 Nazi concentration camp inmates during the Second World War, had, in his own death, escaped his captors—and retribution for his crimes. Scientists examined the remains of a body exhumed on June 6 from a grave at Embu, Brazil, and American and Brazilian forensic experts said they had no doubt that the handwriting in notes and letters written by the man was that of Mengele. Even famed Nazi hunter Simon Wiesenthal allowed that there was a “50-50” or “maybe 60-40” chance that the infamous Dr. Mengele of Auschwitz-Birkenau was dead.

Although it was the sixth report of Mengele’s death since 1946, it seemed to be the most plausible. Breaking three decades of silence on his father’s fate, Mengele’s son, Rolf, 41, released a statement in Munich declaring, “I have no doubt that the corpse exhumed in the cemetery at Embu ... is the remains of my father.” Then the son pledged to hand over critical evidence to the chief prosecutor in charge of West Germany’s search for Mengele, Hans-Eberhard Klein. A statement issued by his step-

brother, Jens Hackenjos, said that the evidence would include proof of Rolf’s visit to his father’s grave in 1979, a photo of Mengele taken in the 1970s and a sample of his handwriting.

Rolf Mengele also gave the Munichbased magazine Bunte hundreds of photographs, letters and about 30 lb. of documents which the son said were a record of Mengele’s life at large in South America. Bunte editor Norbert Sakowski, who planned to start publishing a series of heavily illustrated articles this week, said that Rolf Mengele had asked for no remuneration. He added that if Bunte makes a profit by selling subsidiary rights, it will give the money to survivors of the Auschwitz-Birkenau camp.

Sakowski said the son’s motive was that “he was burdened by the heritage of his father. He felt that if all of these details were published, it would be all over.” The editor added that information in the documents showed that Mengele had lived in various South American countries and that he had visited Europe several times. As well, family members,

using their own passports, used to visit him in South America. Said Sakowski: “It’s quite unbelievable that they never caught him.”

In Brazil people who gave sanctuary to a man claiming to be Mengele for more than 15 years offered persuasive testimony that their sometimes autocratic, sometimes urbane house guest was in fact the object of one of the most intensive manhunts in postwar history. At week’s end, the balance of circumstantial evidence shifted strongly toward confirmation that the bones disinterred from Embu, officially listed as the remains of one Wolfgang Gerhard, were Mengele’s. Both Brazilian and American analysts declared themselves convinced that Mengele had in fact died. But Israeli and West German investigators who have pursued Mengele for 40 years are not totally convinced. Said Klein: “The case will only be closed for us when we are certain that he is dead.”

At the city morgue in Säo Paulo, Xrays of the remains from Embu were consistent with the body being Mengele —and ruled out the possibility that the bones had been Gerhard’s. A 30-hour examination by handwriting experts identified 15 points of similarity between Mengele’s 1938 application to join the Nazi Waffen-SS, and other material, and documents found in a Brazilian farmhouse where he spent his final years. Forensic expert David Crown, head of the U.S. Central Intelligence Agency’s documentary identification department from 1967 to 1982, declared: “They were handwritten by Mengele. If we had found there was some problem with the writing, we would have rendered a qualified conclusion. The fact that we are rendering an absolutely positive conclusion means that we have no doubt as to the authenticity of that writing.”

Säo Paulo police chief and head of the Brazilian investigation team Romeu Turna declared: “It is almost certain Mengele lived in Brazil for at least 15 years and drowned Feb. 7, 1979.” Mengele would then have been 68 years old. Still, forensic study of 500 bones and bone fragments, a clump of hair and seven teeth found at the grave site may not be completed until the end of the month. Even then, Turna conceded, only fingerprints would provide real confirmation.

According to Turna, the man reported to be Mengele was sheltered in Brazil from 1961 until his death by two couples —Hungarians Geza and

Gitta Stammer and Austrians Wolfram and Liselotte Bossert. They were introduced to their boarder by Wolfgang Gerhard, whose identification papers were found at Embu. According to his son, Adolf, Gerhard, a salesman described by Turna as a Nazi “fanatic,” died in poverty in Graz, Austria, in 1978.

Gitta Stammer, with whom “Mengele” lived for 13 years, said that the experience was often a troubling one. “Those weren’t happy years for us. He took over our lives and was authoritarian with our children.” Stammer learned his identity during the second year of his stay. “I read some article about the war and asked him who he was. He said: ‘You have lived with me long enough to know. I am Josef Mengele.’ ” Warning the Stammers to keep silent, Gerhard told them, “You should be happy that in your unimportant little lives something great has happened to you.” Still, they were relieved when Mengele left to live with the Bosserts. Stammer denied being paid for keeping Mengele and that his family in Germany was indifferent to his difficulties.

Still, there were apparently a number of transactions between the man who said he was Mengele and his family in Germany, some of which may have involved money. The family owns and operates Karl Mengele & Sons, a farm machinery manufacturing firm in

Günzburg, West Germany (1984 sales, $110 million). So prominent is the company that signs outside the Bavarian town read: “Mengele-Günzburg.” Hans Sedlmeier—a lifelong friend of Mengele’s and former firm manager whose confiscated correspondence with Wolfram Bossert first led police to the Embu grave—made several trips to Brazil, carrying letters and, according to Bossert, money.

As well, Turna said the Stammers enjoyed a higher standard of living than could be expected from Geza Stammer’s earnings as a topographical engineer. The income, Turna added, could not justify Stammer’s frequent overseas travel or his current trip to Europe. Police are now investigating Bossert’s contention that Mengele’s funds were invested in the Stammer farm outside Säo Paulo.

Bossert insisted last week that no Nazi groups—such as Odessa or Kameradenwerk, organized to protect and aid Nazis after the war—assisted Mengele. He added: “If such organizations exist, they should be ashamed not to have found any other protection or shelter for Mengele than a Hungarian couple or myself.” But unlike Gitta Stammer, the Bosserts were genuinely fond of the man they believed to be Mengele, the doctor who with a simple wave of his finger, left or right, decided who would live at Auschwitz and who would die. And they

were upset at their boarder’s death. “Liselotte called me up and said,‘The old boy’s dead,’ ” Bossert recalled. “She was crying a lot.” He added that the Bossert children “adored” Mengele, calling him “Tío”—uncle. And the Bosserts’ housemaid, Elsa Gupian de Olivera, now 34, was also attracted to him. Said de Olivera: “[He was] charming, despite his age. He said he wanted me to live with him without getting properly married. If he had been able to marry me legally, I would have done it.” Mengele’s second wife, Martha, 63, lives in Merano, Italy.

Still, while teams of Brazilian, German, Israeli and U.S. investigators pored over the accumulating evidence, skeptics continued to regard the story as an elaborate hoax. Said Rabbi Abraham Cooper, associate dean of the centre named for Nazi-hunter Wiesenthal: “We know how much Mengele and his supporters have to gain by making the world believe he is dead, especially with the background of the Hitler diaries hoax in our minds.” Police chief Turna disagreed: “ If someone cooked this up, then he must have a finer mind than Agatha Christie,” he said. “It would have been a novel for the future that was 15 years in the planning.”

With Richard House in Säo Paulo, Peter Lewis in Brussels and Sue Masterman in Vienna. 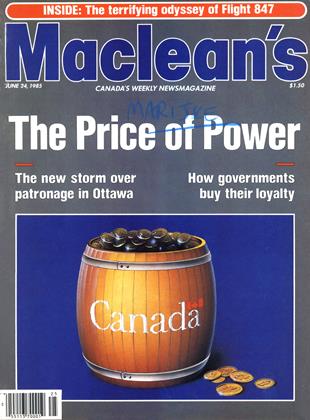