For more than a century Halifax residents have delighted in the city’s Public Gardens—17 acres of lawns, flowerbeds, duck ponds and exotic shrubbery five blocks from the business district. But on June 3, the gardens echoed to the roar of a power shovel across Spring Garden Road as it

levelled Hart House, the last of a block of Victorian homes razed to make way for a 21-storey condominium tower. The demolition took place despite appeals to city council by preservationists who said that the three-storey Hart House, built in 1898 by lumber magnate Havelock Hart, was an important historical site.

They added that the tower would alter the gardens’ environment and threaten their vegetation. Said Edward Lindgren, vice-president of Friends of the Public Gardens: “We have lost one of the most important houses in the province.”

The dispute erupted in June, 1983, when Halifax’s United Equities Ltd. applied to develop 1.8 acres of land facing the gardens’ southwest corner and announced its plan to replace Hart House and five other buildings with two condominium high-rises. Preservationists said the towers would create high winds and cast shadows that could kill many of the gardens’ plants. The protesters appealed to city council to vote against the development and declare Hart House a protected heritage property. But council, facing a $1.3-million deficit this year, voted in United Equities’ favor. The reason: the development will produce more than $500,000 a year in new tax revenues. Said Aid. Gerald O’Malley: “We need a broader tax base to get more money in. We cannot preserve everything.”

For its part, United Equities has scaled down the proposed development from two towers to one. Although chief executive officer J. Keith Allen maintains that this decision was “based on market concerns,” he added that the company has acted in good faith. For one thing, this March it offered to pay the $250,000 cost of relocating Hart House—which the preservationists refused. Said Allen: “They had no interest in saving Hart House. It was just a way to stop our project.” But Lindgren said that the offer to move the building was tied to his group’s promising not to oppose the development. Said Lindgren: “The offer was blackmail.”

Hart House is gone, but the Friends are continuing their struggle to prevent high-rise development on the site. Eight days after the demolition took place 70 people filed into the gymnasium of a small elementary school. There, the municipal planning advisory committee began hearing submissions on United Equities’ application to vary zoning height restrictions on the property. Declared Friends’ chairman Donald Patton: “Other developers are awaiting their cue from what happens on the site.” The committee agreed with the group’s arguments and recommended that city council turn down United Equities’ request. As a result, there will be further public hearings on the application in mid-July. Meanwhile, Allen is still confident that the development will be “a jewel in a garden.” To that end, the condominiums will feature a view of the Public Gardens through plate-glass bay windows—a design copied from the now-vanished Hart House. 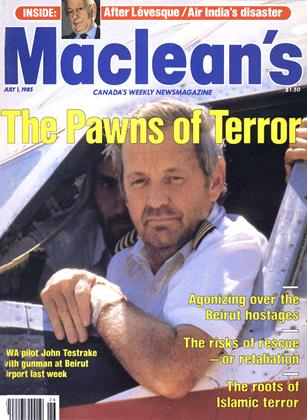