Campbell Soup Co. Ltd., the icon of the grocery trade whose familiar red-and-white cans can be found

in most Canadian kitchens, tells its shareholders that it is in the “wellbeing” business. But two years ago, when the 55-year-old Toronto-based company hired the president of its major rival, Thomas J. Lipton Inc.’s David Clark, as its new chief executive officer, it was far from well. Clark was the ninth top manager to be brought in to save the company in 11 years. The firm had suffered declining sales for six of the previous seven years. And office politics were rife, according to Clark. That, he said, was due to a paternal and punitive “cov-

er your ass” management which had acquired a “loser’s image.” With instability in the executive suite, Campbell’s 2,000 “pent-up” employees, had no “shared vision,” said Clark, and the organization was “ripe for change.” Dynamic: Clark, a 46-year-old MBA from Hamilton, Ont., who is a self-admitted corporate zealot, immediately set about to make changes. His first mission was to reform marketing and management and galvanize the staff at the company’s nine plants and three farms. To do that, he paid human resources consulting firm Achieve Enterprises Ltd., which opened shop in Edmonton in 1978 and has, since 1980, on average, doubled its earnings every year, $50,000 to transform Campbell

from a staid company into a dynamic one. Clark increased the salaries of those whom he considered to be good workers, reduced the work week to 4V2 days for salaried workers and staggered working hours.

In an attempt to involve middle managers in decision-making, he divided the 90 Ontario managers into 15 “task forces” to tackle specific goals. In Campbell’s nine plants in five provinces he grouped employees into “quality circles” to address and solve workplace problems. He also named a company ombudsman, invited seven employees to have 90-minute breakfasts with him every two weeks and established an annu-

al award for an exemplary company employee. Last year the winner was 59year-old Bill Clark, a maintenance manager in the Listowel, Ont., plant who was given a gold ring for designing pieces of machinery to overcome production problems.

Clark also began holding “information forums” for employees, a move that helped workers feel more secure in their own roles. The company also subsidized a fitness program and weight-training program, put new sofas and easy chairs in the women’s washrooms, formed a 10woman “women’s advisory committee” and in May held an open house at the Toronto plant attended by more than 3,000 relatives of workers. One of the biggest hits with employees was the

remodelled cafeteria in Toronto that, Clark said, “you wouldn’t take your dog to before.” And in an effort to get both managers and employees alike committed to the company, he encouraged employees to go out and meet retailers of Campbell’s products (which include such brand names as Franco-American, Swanson’s TV dinners, Pepperidge Farm desserts, Allen’s apple juice, V-8, A-l Sauce and Gattuso pastas).

The cost of instilling what Clark calls “a profound respect for people” at Campbell was about $200,000. The results, in financial terms, were dramatic. In 1984, the year after Clark installed what he called his “Serendipity” program, productivity went up by eight per cent and net sales jumped by 4.6 per cent to $265 million. Sales are expected to rise another five per cent in 1985.

Sunny: Other changes were more subtle. Said Ethel Pokonzie, timekeeper at the 600-employee Campbell Toronto plant and an employee for 40 years: “Until a couple of years ago there was always a line drawn between the plant and office people. There isn’t now. It’s just a nice atmosphere. Now there’s hardly a person who doesn’t say ‘Hi.’ ” Added Ed Dzikowski, a 35-year-old supervisor of a soup production line at Campbell’s Portage la Prairie, Man., plant: “It’s a new mood, the difference between a cloudy day and a sunny one.” Dzikowski is a member of one of his plant’s “quality circles,” one which last month changed a working procedure so that losses were reduced. Campbell vicepresident for human resources Peter Barkla said that the nature of office politics has changed too: now that workers know more about what is going on, there are fewer rumors and less dissension.

Clark is now planning to produce a videotape on a strategy for excellence to be shown to the hourly rated production employees. “I believe we have shaken the limbs of the organization,” he told Maclean's. “If we haven’t shaken the trunk yet, I believe we will.” Clark said that a management style “that has much to do with the tenets of religion made some of my colleagues feel a bit uncomfortable.” But Clark, who is just two years into his five-year “corporate vision,” is pressing on. Last week Campbell’s middle managers awarded stickers to employees who excelled in their work that read, “Thanks for a souper job well done.” Said Clark: “My feeling is that people will kill for them.” 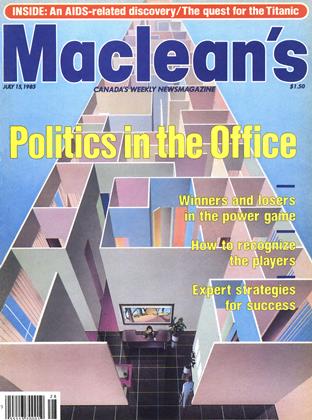