The people and the forests in the southeastern corner of British Columbia suffered through the gravest danger and devastation. And last week, from coast to coast, hundreds of forest fires raged through sun-baked tinderwood, forced the evacuation of towns and villages and caused many

people to fear for their homes, their jobs and even their lives. Fires blazed out of control in Alberta, Manitoba and Newfoundland, while in British Columbia fires broke out at such a rapid rate that provincial officials began updating the count hourly. As well, large sections of 14 U.S. states were ablaze, and in California forest fires have killed three people. In the southeastern B.C. lumbering town of Canal Flats, threatened by flames since early in the week, all but a handful of holdouts among the 1,400 residents had been evacuated by the weekend to nearby Kimberley—which was itself in danger of being consumed by a 5,500-acre blaze eight kilometres away from the town of 7,375. Declared B.C. Forestry Minister Thomas Waterland: “We are now in a war situation.”

In Kimberley residents had government assurances that a major attack on the approaching fire on Thursday had succeeded in holding it at bay. Said town resident James Davis, 73: “I had no fears at all. I felt the authorities could handle it.” But by week’s end B.C. forestry officials had nearly exhausted their resources battling more than 750 fires, and they had resorted to recruiting outof-work, inexperienced young men to

supplement the 3,600-strong firefighting force. In the Canal Flats area, 580 km east of Vancouver, most of the volunteers were unemployed students from the neighboring town of Nelson, some of whom had never seen a forest fire before. B.C. forestry ministry spokesman Paul Dean told Maclean’s that the province had no other source of needed manpower. Said Dean: “We are not clearing out beer parlors but we are desperate.” With Canal Flats still in danger of being overrun by flames, evacuees criticized the province’s firefighting methods. Declared Canal Flats millworker Lloyd Freestone: “They are pretty damn slow and lax. If the mill goes, the town goes.”

By the end of the week the province’s largest fire, Spen, named after Spencer

Creek, its point of origin, had travelled 20 km toward Canal Flats, destroyed almost 25,000 acres of forest and surrounded the town with black smoke. Even more threatening was the possibility of that fire combining with four others burning out of control in the southeast region, including the Ram Creek fire, and forming a firestorm similar to one in Goose Bay, Lab., late last month. That blaze generated winds

which extended the flames by 1.5 m.p.h. and sent smoke two miles into the air. Said Kenneth Colbert, an official in Newfoundland’s department of forest, resources and lands: “The air was so turbulent our water bomber could not patrol an area four miles away.” Firefighters in the Goose Bay area deployed 13 aircraft to battle the flames, three of them water bombers from Ontario and Quebec capable of scooping up as much as 1,200 gallons of lake water in as little as 10 seconds. Although last week Newfoundland officials claimed victory over the blazes, firefighters at the high-tech Fire Control Centre in Victoria were still desperately trying to make effective use of the equipment and technology available to them. Forestry stations throughout the

province monitored lightning strikes, which spark 40 per cent of forest fires (people account for the rest), and mapped them on computers. Still, as 116 specially equipped helicopters and 30 fixed-wing aircraft dropped fire-retardant chemicals on threatened timber stands, 80 portable water pumps and thousands of feet of hose had to be brought in from as far away as Ontario. Declared Fire Control Centre spokesman Kenneth Lines: “We planned for a

normal fire season, but obviously this is abnormal and we just ran out.”

In another development on the weekend, some B.C. tourist operators criticized what they said was “sensationalized” media coverage of the fires. Said Michael Smith, president of the Rocky Mountain Visitors Association: “What we don’t want to happen here is to scare off the tourists. We don’t really feel we are getting a fair shake. Every time the

ministry of forestry talks about the possibility of contingency plans for evacuation, everybody jumps right on it and says it’s evacuation.” Speaking to reporters at a fire control centre near Invermere, Smith declared: “We don’t want to put people into a blazing inferno, but let’s be realistic. We’re standing in cooler temperatures with blue sky and no smoke.” But he said that campers should avoid the parched forests and should stick to main highways, lakes,

For their part, U.S. officials of the federal Interagency Fire Center in Boise, Idaho, said the outbreak of brush and forest fires in 14 western states was severely straining their resources. As more than 17,000 people—the largest firefighting force assembled in U.S. history—struggled to contain blazes on more than one million acres of land, spokesman William Bish-

op declared: “One option is to ask for military assistance, so we’re going to be thinking of that. We still have some manpower available, but we’re stretched.” The hardest-hit state was California, where thousands of people were evacuated from their homes, including 4,500 from Los Gatos, 95 km south of San Francisco. Although officials said humidity and cooler weather at week’s end had helped their efforts, they warned that there could be new outbreaks. Said the Fire Center’s Scott Brayton: “The general situation is still very critical.”

British Columbia’s efforts to stop this season’s fires from consuming the province’s precious forests have cost the government more than $1 million a day. Said Lines: “The money is spent as judiciously as possible. But when you have to hire 500 men overnight, it dries up pretty fast.” With $33.3 million spent so far this year and 467,000 acres of forest already destroyed, the current season may rival the fiery summer of 1982, when the province lost $43 million worth of timber—and spent $41 million on firefighting. In Ontario, where the ministry of natural resources annually spends $37 million for fire suppression, a 1980 report said that because the policy of attempting to extinguish all fires was “potentially very expensive,” a revised firefighting policy was necessary. As a result, the government passed legislation in 1982 under which some fires are allowed to burn as long as they are under control and lives and commercial timber stands are not threatened.

B.C. officials say that policy has not been instituted in British Columbia because all the province’s lumber is too valuable. They add that the impact of the present fires on the province’s economic base of timber and tourism is as impossible to calculate as the number of fires that will start during the remainder of the season. But one thing is certain: the latest ordeal is just the start of a problem that will recur throughout the summer. In fact, forestry spokesman Dean said that in British Columbia, where the forest fire season usually begins in April and lasts until October, the recent outbreaks are “early for the fire season.” U.S. officials echoed that concern. Declared Bishop: “We now have the largest firefighting force ever assembled, and the fire season has just begun.” Added Dean: “We could get a light shower, but in a couple of weeks we could experience another dry spell and be plagued with this situation into the fall.”

With Gregory Fjetland and Jane O'Hara in Vancouver, Lawrence Jackson in Labrador, Sharon Doyle Driedger in Toronto and correspondents ’ reports. 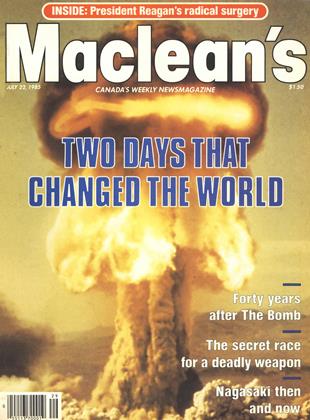