For the 16,000 Canadian employees of Alcan Aluminium Ltd., the second-largest aluminum producer in the world and one of Quebec’s largest employers, the directives emanating from the company’s Montreal head office this year have caused increasing concern. First, in January, Alcan announced that 150 jobs at its plant in Arvida, Que., would be phased out over the next two years. Then, in May it cut 100 of the 385 positions at its Maison Alcan headquarters. A week later the company announced that it was slowing construction of a new $l-billion aluminum smelter at Laterrière, Que. In the coming months, further cost-cutting efforts are expected as Alcan battles an industry-wide slump brought on by a glut of aluminum on world markets. Said Ray Goldie, a Toronto-based metals analyst for the brokerage firm Richardson Greenshields Ltd.: “If aluminum prices do not recover soon, more production workers will feel the cutbacks.” Alcan’s competition is battling the same troubles. On May 27, New Yorkbased Standard & Poor’s Corp., a bond rating service, dropped the credit rating of four North American aluminum producers by two notches to Triple B plus. Said Dennis Dowden, a rating officer with Standard & Poor’s: “Aluminum is not simply at the low point of a business cycle. There is a deep structural crisis in the industry.” The key problems: increased recycling of scrap aluminum and excess capacity, often caused by government-owned aluminum companies outside North America which ignore low prices and maintain high production levels to protect jobs.

In order to remain competitive Alcan is developing new uses for aluminum. Between 1980 and 1984 the company substantially increased its annual research budget to $90 million, despite a drop in profits to $350 million from $750 million in the same period. Last February the company announced its latest technological breakthrough, a procedure developed in partnership with automaker British Leyland PLC that would allow manufacturers to build car frames from sheet aluminum instead of steel.

In addition to its technological ingenuity, Alcan has other strengths. With nearly $8 billion in sales last year, it is robust enough to weather a slump. But before markets improve, the current crisis may take a further toll. Said Dowden: “Alcan is at the mercy of events beyond its control.” 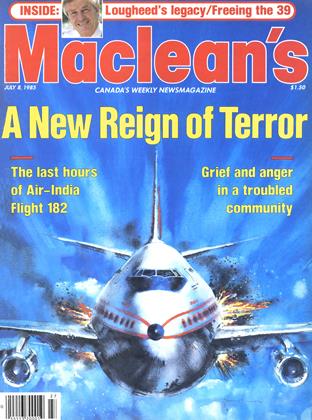