The noisy, the rude and the restless Charles Gordon August 19 1985

Good luck to Edmonton city council and its “share the air” campaign. Good luck to Mayor Ed Koch of New York. Both city governments have noticed, now that it’s summer and the windows are open, that their citizens view city parks as just the perfect spot to test the power of portable stereo systems. Both cities are attempting to crack down, New York by legislating, Edmonton by persuasion. “It’s not proper,” said an Edmonton alderman, “to make this much noise in the park. It’s like a car without a muffler.”

Funny he should say that, because car and motorcycle noise is part of the same problem. There are laws about vehicle noise, just as there may soon be laws about portable stereo noise, but they fly in the face of human nature, at least as it is perceived by the people who flog lifestyles in advertising. The authorities say, “Don’t make so much noise”; the television ads incite you to make as much as you can. You will have a difficult time remembering the last commercial that extolled a motorcycle or muscle car for the degree of quiet it could produce on the streets. Similarly, the ads for portable stereo systems are not likely to stress how good they sound in your room with the door closed. No, there’s that gleaming machine at the beach, surrounded by dancing fun seekers in bathing suits.

The advertising may not mirror reality exactly—ever notice a bloodied thumb in a beer commercial?—but it contains an element of truth. And if we examine it, we find that Edmonton city council is up against something far stronger than the portable stereo: the awesome power of the portable society. The portable society is dedicated to the principle that you can take it with you, within the usual limits. Hey, why leave your music at home? Just over there, a couple of hundred yards away, is a lovely young thing who, when she hears your Hall and Oates tape across a crowded park, is going to come running right over and say, “Let’s you and me bop till we drop.” Is there even the slightest

chance that a mere city council can stand in the way of such a dream?

The portable stereo system, viewed by many as a disease in itself, is just a symptom of a portable society. People in a portable society have no place to stay put. The city park they make noise in doesn’t feel like theirs, because they were living in another city last year and will be living in still another a couple of years from now. Summer cottages, places of semipermanent summer residence, are for the privileged few, and even many of those have given up the cottage because they have moved too far away and they don’t get along too well with the relatives anyway.

The day of departmental, corporate and community loyalty is gone and the day of just passing through is here1

free-ranging, garbage-spewing noise machine. The houseboat has the beds inside, the gas barbecue on the back and room for all the portable stereo equipment you can pack. Tie her up to somebody’s shore, twist a few tops and blast away. Who cares, eh? You won’t be there tomorrow. And as for the garbage-well, plenty of room in the lake.

The phenomenon should not surprise us if we have been paying attention in recent years. The portable cottage is a natural outgrowth of the portable career, a way of life for Canadians almost as long as there have been four-lane highways. The Canadian who had a summer cottage or a neighborhood park he cared for was likely a Canadian who felt a loyalty to his place of work. Lacking a four-lane highway to another one, he stayed put. He started near the bottom and worked his way up in a straight, if slow, line. In government it was the same thing. A civil servant’s career began at a low level in a department, where he toiled patiently, moving gradually upward until he reached the top job, which he believed he would eventually deserve.

Today’s Canadian doesn’t operate that way. He works his way up, yes, but the line has more zigs and zags than the flight path of a mosquito. And when he gets within reach of the top job he may find it has been given to a high-flying outsider. So he learns to become a highflying outsider himself.

Whether in the oil patch or the federal bureaucracy, the pattern is the same. He starts working for A, jumps ship and joins B, getting a raise in pay for his trouble, latches on with C for a while, then reaches the apex of his career running D or perhaps even A again. The present job is a good springboard to the next, and the next is not far away. The pension, it goes without saying, is portable too. The day of corporate or departmental loyalty is gone, and the day of just passing through is here.

The zigs and zags of the portable career keep the moving companies and real estate agencies in business. Each career move brings a physical move, either to another city or another neighborhood to which there is little reason to develop a sense of belonging. The newspapers may be writing about city council wanting to keep the noise down in the city parks, but who reads the local news?

The portable society, even more than the voodoo economics practised by provincial departments of education, may be responsible for the collapse of the neighborhood school. Passing through as they are, the parents have no emotional link strong enough to combat their desire to send Junior across town to the school that has the computer programming course that is not available at the school around the corner. When the school board wants to shut down the one around the corner because of declining enrolment, who cares enough to fight it?

If the portable society can close schools, change the nature of industry and government, pollute lakes and cover the highways with trailers, it is a worthy opponent for the Edmonton city council. More generally, concern over the rootlessness that gives us, among other things, noisy parks has caused many North Americans to look enviously to Japan, where family ties are strong and corporate loyalty is the norm. Powerful corporate loyalty has helped Japanese industry to thrive—and give us the portable stereo system. 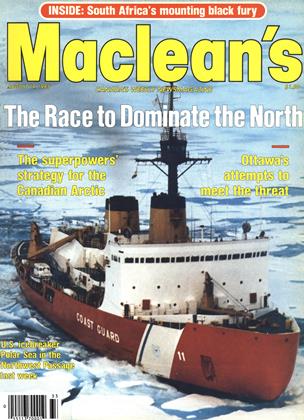