Each summer for more than 20 years Regina has strengthened its dubious distinction of being the foul-water capital of Canada. The reason: algae growing in the water supply. Even after treatment, drinking water piped from Buffalo Pound Lake, a shallow, manmade reservoir 47 km to the northwest, has a bitter taste and the aroma of decaying grass clippings. But this year the 175,000 residents of the Saskatchewan capital are looking to a new $14.2million carbon filtration system that will improve the water quality while the city tries to convince senior levels of government to share the cost of a $100million pipeline. Its purpose: to bring water from Lake Diefenbaker, another artificial lake 140 km northwest of Regina. Said 65-year-old Arnold Hodgins, a security officer who has lived in Regina since 1953: “Since the filters started working, the water has tasted a lot better. But for the past few years I do not think it could have tasted any worse.”

Demands: The filtration system, with chemist Leslie Gammie in charge of water quality, began operating in June, but the relief it offered is likely to be temporary. Buffalo Pound Lake is in constant danger of pollution from fertilizers draining into the water from nearby farms. And Regina water department officials estimate that within four

years the filtration plant will not be able to meet the demands of the city’s growing population. But Regina is not alone in the search for water. Indeed, many other Canadian municipalities quickly find that the high costs of improved water systems need assistance from provincial and federal governments.

Battle: In the town of WhitchurchStouffville, 35 km northeast of Toronto, residents managed to close down a landfill site which had contaminated 16 wells in the area. In 1981 a 200-member group succeeded in convincing the Ontario Environmental Assessment Board to reject an application by dump owners to expand the landfill site.

And after mediation by the provincial environment ministry, Waste Management Inc. closed the site in June of this year as well as replacing the contaminated wells.

Declared Frances Sainsbury, a local real estate agent and chairman of the group Preserve Our Water Resources: “It was an uphill battle with politicians all the way. But we kept the heat on.”

And in Waverley, N.S., 20 km north of Halifax, the fight over clean water

took five years to resolve. Finally, in 1978 the 3,000 residents agreed to pay an annual rate of $250 to replace wells contaminated by arsenic from exhausted gold mines. Now Waverley is linked to Halifax’s water system.

Safe: Regina’s water problems are more complex and enduring. They began during the 1950s, when the area’s underground wells became inadequate for a growing population, forcing the city to turn to Buffalo Pound Lake, the nearest source of surface water. But the lake quickly revealed its inadequacies. For one thing, it is only an average of 10 feet deep—which guarantees a rapid growth of algae each summer. And two years ago a report prepared by PC MLA Gerald Muirhead confirmed that Regina would soon have to look beyond Buffalo Pound Lake for its water—even though the water was still safe to drink. Declared the report: “No expert contacted was prepared to state it would be safe at all times for human consumption and free of taste and odor.”

But the city and the province have been unable to persuade Ottawa to help them build the pipeline from Lake Diefenbaker. In 1983 the city and the province agreed to contribute $25 million each to the project. But the former federal department of regional economic expansion refused to finance the remaining $50 million. Instead, federal officials noted that Ottawa had already contributed $95 million to help create Lake Diefenbaker in 1958. Making it Regina’s chief source of drinking water, Ottawa declared, was strictly a provincial responsibility.

For his part, Brian Mulroney visited Regina as Conservative leader during the election campaign and told residents that he would “equitably and promptly deal with the water issue.” Now, city politicians plan to press Mulroney to follow up on his undertaking. Said Regina Mayor Larry Schneider: “The pipeline is the ideal solution for Regina’s long-term water problems.” But until the pipeline is built, Regina residents will have to content themselves with the new filtration system’s improvement. 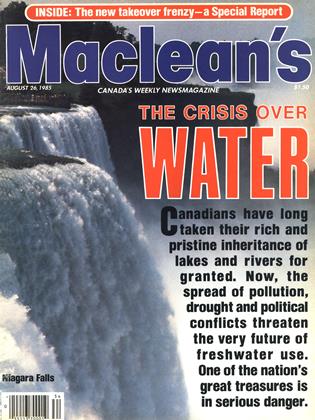