Forty years ago there was no question where the United States stood on trade. In the aftermath of the Second World War, Washington was determined to tear down the great tariff walls thrown up during the 1930s. Those barriers had stifled trade, intensified the Depression and led, in part, to the Second World War. With the end of the fighting, America emerged as the great crusader for free trade, cajoling and prodding the nations of the world to open their borders. Under relentless U.S. pressure, many tariff barriers — both American and foreign —crumbled. The results were immediate and astounding: between 1948 and 1973 world trade grew by an average of seven per cent a year and total world production climbed at an annual rate of five per cent.

Ominous: But the United States of 1985 shows ominous signs of swinging back to the protectionist days of the Depression. By last year a soaring U.S. dollar had pushed American-made goods out of the reach of many foreign customers and turned a long history of trade surpluses into a staggering $102billion (U.S.) trade deficit. That reversal has given rise to a nationwide surge of anger against U.S. trading partners and spawned nearly 400 proposals for protectionist legislation in Washington. “I have never seen stronger congressional sentiment for acting on the trade front,” said Senate Majority Leader Robert Dole. “My colleagues—including strong advocates of free trade—are fed up.”

Veto: But not all official Washington has mounted the protectionist barricades. For its part, the White House has warned that it would veto any protectionist bills passed by Congress. Last month President Ronald Reagan backed up the administration’s free trade rhetoric by refusing to oblige the U.S. shoe industry’s request to impose quotas on imported footwear. And a White House trade official said he is certain that the President favors negotiation of a Canada-U.S. free trade pact. Indeed, Reagan proposed a sort of North American common market in 1980 during his first presidential election campaign.

The White House can count on some of the giants of American industry to back it in its dealings with Congress. Last week the Canadian-American Committee, an organization of business, professional and labor leaders jointly sponsored by the Washingtonbased National Planning Association and the Toronto-based C.D. Howe Institute, endorsed negotiations for a free trade agreement with Canada.

Still, trade negotiators on both sides of the border are finding it difficult to measure the depth of support for free trade in the United States. “It’s not a sensible idea for anybody to try and gauge U.S. reaction right away,” said William Diebold, a retired economist formerly with the Council on Foreign Relations and a longtime U.S.-Canada trade observer. “The issue has not been discussed in this country on the level it has been considered in Canada.” Added a congressional trade expert: “It’s very hard to assess what the consensus is—in fact, I don’t even think there is one.” Diebold and others agree that the spark for Canada-U.S. talks must come from Ottawa. Said Peter Morici, vice-president of the National Planning Association: “The initiative clearly has to come from Canada.”

Favorable: That first step is expected to come within two weeks, probably in the form of an official letter from Prime Minister Brian Mulroney to Reagan informing him that Canada wishes to open negotiations. A favorable response is almost assured.

If Reagan recommends negotiations, Congress has 60 days to veto his proposal. One Canadian Embassy official in Washington said that he expected both the Senate and the House of Representatives to hold hearings to discuss the issue because “there are any number of congressmen who would like to get their kick at the can on any little Canada-U.S. trade issue that bothers them.” But while the hearings might generate a great deal of angry debate, particularly over the growing levels of Canadian softwood lumber exports to the United States, few observers predict that Congress would veto the talks.

Disputes: The key figure across the table from Canadian bargainers would be Clayton Yeutter (pronounced YlE-ter), the U.S. special trade representative. Reagan lured the suave 54-year-old from the post of chief executive of the Chicago Mercantile Exchange to the administration’s top trade position last April. Most observers expect that Yeutter’s inexperience and his preoccupation with disputes involving Europe and Japan will prompt him to appoint William Merkin, assistant deputy trade representative for the Americas, as his chief lieutenant. Merkin is widely regarded as a pragmatic and capable negotiator with a thorough knowledge of CanadaU.S. trade relations.

If a draft treaty does emerge, its path to ratification by Congress will be eased by a year-old bill authorizing a free trade agreement with Israel. The U.S.Israeli legislation would not serve as a model for a Canada-U.S. deal—U.S. trade with Israel totalled only $3.4 billion last year, compared to almost $150 billion with Canada. But tacked on to the Israeli trade measure is a rider that sets out a new and simplified procedure for congressional approval of future bilateral trade deals. More often than not, issues without firm support in Congress wither and die from endless

delays and hearings. But the new legislation forces Congress to deal quickly with any free trade agreement that the administration negotiates. Congress would not be able to amend the package, and both the Senate and House of Representatives would have to vote on it within 60 days. A simple majority in both chambers would make it law.

Congress will have a powerful—though informal-influence on any negotiations. Admitted

one White House trade official: “Obviously we would be very foolish not to work very closely with Congress.” Most observers see strong intervention by Reagan himself as the key to assuring enough congressional support to guarantee passage of a free trade bill. agreement would be the genuinely cordial trading relations between Canada and the United States. The rash of trade disputes that have made headlines for years in Canada, such as the U.S. forestry industry’s attempt to limit imports of Canadian lumber, pass almost unnoticed in the United States.

Still, it is unclear exactly how the White House would sell a deal to skeptical congressmen with local industries to protect. “It’s very hard to imagine that you can make a terribly strong case for free trade on purely economic grounds,” said Diebold. And except for U.S. corporations with a substantial interest in Canada, support from the business community may also be limited. According to Frederick Stokeld, the director of international business relations for the U.S. Chamber of Commerce, free trade with Canada is no more a burning issue with most U.S. businesses than it is with Congress. “There’s no great outcry for free trade from U.S. business because its interests in Canada are never focused,” said Stokeld. “I hate to say this, but they tend to treat it like U.S. business in California.” Still, said Stokeld: “The fact remains that Canada is a huge market that is characterized by a lot of itsy barriers to trade.”

Persuaded: Some observers say that Congress may be persuaded that a pact with Canada would be a useful example to the real targets of U.S. protectionism—the Japanese and Europeans. Others suggest that many U.S. leaders are concerned by the increasing prominence of trading blocs elsewhere. The European Community and the European Free Trade Area, in which Scandinavia is a dominant partner, for example, are cur-

rently discussing ways to further strengthen their trade ties. And one expert said Japan is considering an agreement with China or with all the nations of the eastern side of the Pacific Rim.

For now, the administration is content to wait until Ottawa makes the first move. “Nobody really knows what the Prime Minister is thinking,” said one White House official. “We just don’t know what Ottawa is going to bring us.” If, as Yeutter: barriers expected, the Conserva-

trade talks with Washington, one thing is certain: the resulting negotiations would likely prove to be the most complex and difficult diplomatic undertaking in the history of Canadian-American relations. 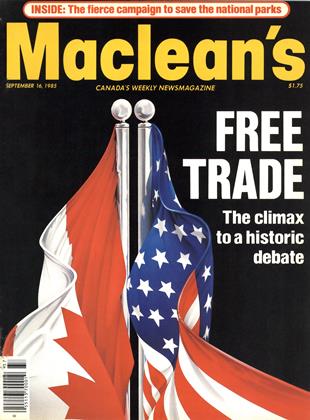