In the near future a United States Air Force jet fighter will fly to the edge of outer space and fire a special weapon designed to destroy an aging U.S. satellite. With that announcement last week Washington raised concerns about an expansion of the arms race into outer space. And the Pentagon made the revelation just as debate in Canada over participation in President Ronald Reagan’s proposed space-based “Star Wars” defence plan reached a climax. An all-party parliamentary committee tabled a report last week that was divided and indecisive.While eight of the 17 committee members recommended that Canada say no to Star Wars, the other nine were less categorical.

The committee was formed in June after External Affairs Minister Joe Clark issued a government discussion paper on Canada’s foreign relations that omitted two key decisions facing Brian Mulroney’s government—Star Wars and the possibility of a free trade pact with the United States. When the opposition demanded parliamentary consideration of both issues, Clark agreed to a study by the committee, which visited seven cities during five summer weeks of hearings across the country.

The committee members listened to scores of emotional attacks on Star Wars, as well as some reasoned arguments in favor of Canadian participation in research on the program. But when it made its report last week, the committee’s deep divisions over the space defence plan were clear. Committee chairman Thomas Hockin, a Conservative MP from London, Ont., who supported the majority view of “an interim no” to Star Wars, accused Liberal and New Democratic Party members of having made up their minds before the hearings began. The five Liberals and two New Democrats on the committee—along with renegade British Columbia Conservative Patrick Crofton —recommended that Canada should not get involved in any aspect of Star Wars.

The remaining nine Tory committee members said that the federal government should delay its decision until more information is available on the weapons plan, officially known as the Strategic Defense Initiative (SDi). Said Hockin: “We lack a lot of crucial information that should be obtained by the government before a decision is made.” For their part, opposition committee members accused the Tory majority of abdicating their responsibility. They added that the government already has the confidential information on Star Wars that it needs. That data, they said,

had been obtained by Arthur Kroeger, the senior civil servant assigned earlier this year to clarify the invitation that was issued to allies of the United States in late March by Defense Secretary Caspar Weinberger. “Most Canadians wanted the government to take a strong stand against SDI,” said Liberal critic Lloyd Axworthy, who noted that when committee members asked for Kroeger to testify, the government said he was not able to appear. For his part, Prime Minister Mulroney told reporters in Vancouver that if the committee could not reach a decision, he would do so, possibly before Parliament resumes on Sept. 9.

The committee’s views on free trade were slightly more cohesive. It recommended that Canada move quickly to improve relations with all its trading partners. But the committee added that Ottawa should first seek to remove existing irritants in crossborder trade and only then move on to seek a wider liberalization of trade with the United States. At the same time, the committee said that in any future bilateral trade arrangements the federal government should ex-

clude such sensitive areas as the communications industry or economic sectors in which Canadian cultural or social policies have special application.

On the Star Wars issues Mulroney and his advisers may decide to make use of a compromise course suggested last week by the Canadian Centre for Arms Control and Disarmament. The partially government-funded organization said in a report that the Mulroney government should continue its current course of allowing Canadian companies to put in bids on research contracts for U.S. government defence programs, but withhold any federal support for the project. What is more, the report claimed that the economic benefits and jobcreation potential of Canadian participation in Star Wars research had been greatly exaggerated. Said John Lamb, executive director of the Canadian Centre for Arms Control and Disarmament: “Keep your options open.”And he added,“Don’t do anything to restrict the commercial latitude but don’t acquire a stake in the ç. program.” 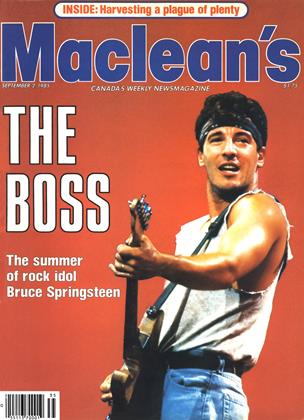