Although heated exchanges over the tainted tuna affair dominated discussion in the Commons last week, opposition MPs also stepped up their attack on Prime Minister Brian Mulroney’s government over the collapse of the Edmonton-based Canadian Commercial Bank (CCB)—and the eventual fate of the troubled North-

land Bank of Calgary. And in Calgary, Northland’s president, William Neapole, joined the fray with an extraordinary news conference. Neapole charged that the government, which put his shaky institution under curatorship on Sept. 1, ostensibly to give it a chance to reorganize itself, had in fact decided to let it fail. Federally appointed auditors who were examining the bank’s loans, he claimed, were simply evaluating its assets at “a rock-bottom value.”

In the Commons, Liberal Leader John Turner charged that in February, just before the Mulroney government attempted to save the CCB by organizing an injection of $255 million in emergency

funding, the bank transferred $300 million worth of loan assets to its failing California subsidiary, the Westlands Bank of Santa Ana. Then, Turner alleged that Mulroney himself had a direct role in the affair—a charge the Prime Minister dismissed as mere “fantasy.” Turner said some of his information came from “personal” sources.

The opposition leader said that Mulroney was hosting a high-profile national economic conference on the weekend of March 22-23 and was alarmed at the prospect of being embarrassed by the first Canadian bank failure in 62 years. As a result, said Turner, the Prime Minister overruled Finance Minister Michael Wilson and Minister of State for Finance Barbara McDougall and ordered a CCB rescue attempt. Despite the $255-million infusion, the CCB did not have the strength to survive, and the federal government ordered its liquidation on Sept. 1.

For her part, McDougall immediately denied Neapole’s charges. Indeed, she insisted that the government had made no decision on Northland’s fate and that the bank was still free to find a way of solving its liquidity problems. But she avoided replying directly to Turner’s allegations. She told the Commons that requests by the government to obtain a document cited by Turner—a February report by the U.S. Federal Reserve Board in San Francisco—had been refused by U.S. authorities.

David Scott, California’s deputy superintendent of banks, told Maclean's that his department has no record of any large transfer of assets between the CCB and its U.S. subsidiary in 1985. But Scott said that roughly $74 million (U.S.) in CCB assets was transferred to the Westlands Bank in 1984. In the meantime, a California bankruptcy court declared George Howard Eaton, one of the founders of the CCB, and his wife discharged debtors and relieved them of more than $29 million in debts.

At the end of the week, government and opposition House leaders had failed to reach agreement on the terms of reference for a House committee that will study the circumstances surrounding the CCB failure over the next two months. While the government clearly hoped to relegate the tangled banking issues to tedious committee hearings, the opposition parties pressed for full access to documents and witnesses —and televised hearings. For her part, McDougall said gamely that she was “really looking forward” to the forthcoming committee deliberations. 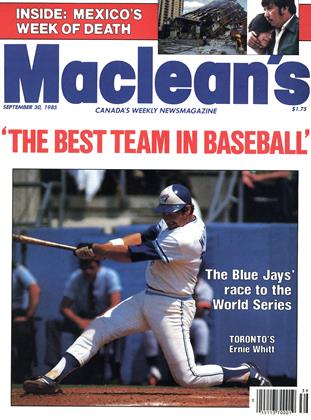