With its lights turned off, the light-colored car was practically invisible as it travelled along a two-lane highway 120 km north of London, Ont., one evening last month. Behind the fast-moving vehicle an officer in an Ontario Provincial Police cruiser was pursuing a driver who had allegedly refused his request to stop: an action that resulted in a chase which reached speeds of 160 km/h. Then, 10 minutes after the chase began, a beige 1976 Oldsmobile slammed broadside into another cruiser which had been making a U-turn on the narrow highway to join the pursuit. Both cars burst into flames, killing two teenaged girls and a 24-year-old policeman. The fiery Aug. 3 crash raised Ontario’s 1985 death toll in high-speed police chases to seven. Said Donna Wattam, whose 17-year-old daughter, Helen, died on what was to have been her wedding day: “There must be a better way to go about preventing traffic violations.”

Police later charged 20-year-old Kevin Koehler of Brussels, Ont., with driving while his licence was suspended,

failing to stop for police and criminal negligence causing death and injury. At the same time, the collision on Highway 9 renewed concern about the usefulness of high-speed police chases—a law enforcement tactic that is governed by widely varying guidelines. Last year

alone, Ontario police cruisers were involved in 1,447 chases—more than 70 per cent of them in pursuit of traffic offenders—which resulted in six fatalities. During the same period, Nova Scotia had the country’s second-highest number of chase-related fatalities with four deaths, but there were only 33 police pursuits across the province. One reason: the province’s Motor Vehicle Act

allows police to record a vehicle’s licence number and break off pursuit when a driver has done nothing more than break such traffic regulations as exceeding the speed limit. Then police can issue a summons holding the vehicle owner responsible for the violation.

Ontario Solicitor General Kenneth Keyes—who will receive a legislative committee report on high-speed chases later this month which may recommend copying Nova Scotia’s law—has already called for tougher guidelines. Said Keyes: “In some instances chases are acceptable—when pursuing an obvious hit and run, a bank robbery, a murder or some perpetrated crime by an individual.” But in Ontario police officers and politicians are divided on the best method of apprehending drivers who refuse to stop for police. For one thing, Keyes questioned the need for police to chase motorists for minor traffic infractions. But Metropolitan Toronto Police Chief Jack Marks says that his officers pursue drivers who ignore stop signs “because there must be a reason for not stopping.” He noted that in 1984, almost 50

per cent of the 326 motorists stopped after a chase were either impaired or had been driving with suspended licences.

By contrast, Calgary police do not chase drivers for running red lights and they break off high-speed pursuits for serious offences if they fail to catch the driver within two minutes at most. Indeed, the force’s guidelines state that “no member will be criticized if he elects in the interests of safety not to pursue or continue to pursue a vehicle which refuses to stop.” And the RCMP, which acts as a provincial police force in every province except Quebec and Ontario, leaves a pursuit decision to the officer on the spot. Still, whenever possible, force members try to stop a fleeing vehicle by radioing ahead to colleagues. They in turn block the escape route with a $500 spiked belt which punctures tires and deflates them slowly.

Under Ontario’s Highway Traffic Act, police cannot charge a driver before seeing his licence. Marks wants the law changed, giving police the power to seize vehicles (tracing them through licence plate checks) if their drivers ignore an officer’s request to stop. And if the owner was not in his car when the infraction occurred, he would have to reveal the identity of the driver to police. Said Marks: “The onus should be on the owner to show why his car should not be

Meanwhile, such U.S. cities as Los Angeles use helicopters to chase cars. One or another of that city’s 15 helicopters is in the air at all times. And after joining a pursuit its crew regularly transmits the fleeing car’s escape route, allowing a dispatcher to send cruisers to an interception point. In Baltimore —where high-speed chases have been banned for five years—five helicopter crews have helped to apprehend more than 80 per cent of the drivers who refuse to stop for police. Said Baltimore police spokesman Arlene Jenkins: “It is better to allow the criminal to escape than to chase him at high speeds and jeopardize everyone on the street.”

Still, both Marks and Keyes say that choppers have their drawbacks. Most police pursuits in the Metropolitan Toronto area last less than three minutes, according to Marks, and he estimated that a helicopter would need about 10 minutes to reach the scene. As well, a helicopter crew would have had difficulty finding the car travelling without lights through the darkened countryside along Highway 9 last month. Added Marks: “I agree that we are looking at a dangerous situation, but the problem could be largely overcome if the proper legislation is enacted.” 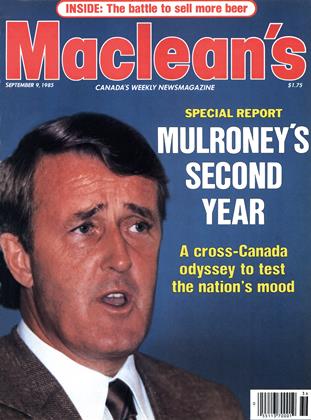