At her wedding, celebrated in the chapel of New Jersey’s Princeton University in 1939, Elisabeth Mann, youngest daughter of German novelist and Nobel laureate Thomas Mann, was the toast of Europe’s exiled literati and prewar America’s cultural elite. Poet W.H. Auden wrote a poem and dedicated it to the 21-year-old on the occasion of her marriage to Giuseppe Antonio Borgese, the Italian novelist and political scientist. Now 68, Elisabeth Borgese remains at ease in the salons of Europe and New York, but her home is a small Aframe cottage overlooking the Atlantic Ocean near Halifax. Although she emerged from a world of wealth and privilege, there is nothing idle about the grey-haired academic. Now a political science professor at Halifax’s Dalhousie University, Borgese has continued to pursue her father’s elusive and vague goal of a world where war and oppression are evils of the past. Said her friend Geoffrey Pearson, the son of former prime minister Lester Pearson and now director of the Canadian Institute for International Security: “She is an idealist, almost a visionary.”

Borgese’s headquarters are a cluttered office on the upper floor of her Sambro Head, N.S., cottage, 50 km south of Halifax.

Beyond the uncurtained windows, the North Atlantic rocks the pink buoys marking sunken trays holding the oysters she has cultivated with a neighbor, marine biologist Catherine Enright. Inside, a small living room is dominated by half a dozen setters from a family of dogs that Borgese has kept through eight generations. Her days begin at 5 a.m., when she rises to make calls to Europe and to study and write. In the afternoons she travels to her office at Dalhousie, which she has occupied since 1978, or to the International Centre for Ocean Development (ICOD) in Halifax, where she is chairman of the board.

Borgese’s appointment by Ottawa to the federally sponsored ICOD last February capped a career of dazzling intensity and variety. At different times Borgese has studied piano in Switzerland, worked as an academic researcher in Chicago, experimented with ani-

mal behavior in Italy, written books, and played an important role in the negotiations leading to the 1982 Convention on the Law of the Sea. Her arrival at the ICOD brought prestige and energy to the centre, which assists Third World countries to develop their marine resources. Now, Borgese di-

vides her time between helping to direct use of the ICOD’S $3.3-million-ayear budget and chairing a Maltabased ocean institute.

Born in Munich in 1918, Borgese grew up surrounded by her father’s friends—Europe’s elite in literature, the arts and science. When the family fled Germany’s Nazi regime in 1933 and moved to Switzerland, pianist Vladimir Horowitz became the young Elisabeth Mann’s music tutor. Composer Bruno Walter and mathematician Hermann Broch were frequent callers. Later, Thomas Mann’s antifascist campaigns made his house in suburban Zurich a focal point for political activists from across Europe.

It was during that period that the young Elisabeth met a man 36 years her elder who would become her husband and mentor. In the 1940s they

settled in Chicago, where Giuseppe Antonio Borgese taught political science. Elisabeth Borgese immersed herself in her husband’s advocacy of world federalism, which he dreamed would bring order to international relations after the end of the Second World War. “That was really when I became politically engaged,” said Borgese.

But in 1952 Borgese and her husband were suddenly forced to find a new home. For the second time in her life Borgese found herself fleeing political intolerance, after followers of the right-wing U.S. senator Joseph McCarthy accused both her and her husband of Communist sympathies. Recalled Borgese: “Peace was a dirty word. It reminded me of my early memories of Germany.” In October the couple moved to Italy, but in December her husband, then 71, died, leaving the 34-year-old widow with two young daughters.

Over the next decade Borgese’s eclectic interests multiplied. She edited an Italian-language cultural journal for the Ford Foundation, pursued her experiments in animal learning and wrote short stories, plays and a feminist treatise, The Ascent of Woman.

In 1964 Borgese accepted a position as fellow at a California-based think tank where chemist Linus Pauling,

twice a Nobel winner, was a colleague, and launched a new round of research into her husband’s ideas on world government. She says that the experience convinced her that an international storm was brewing over ocean rights as technology expanded to exploit ocean resources. When Malta’s ambassador to the United Nations, Arvid Pardo, launched a campaign to write a new Law of the Sea in 1967 to succeed an earlier, more limited convention, Borgese eagerly enlisted as an adviser to the Austrian delegation. She brought to the project her reputation and a global network among specialists in seabed development. Both proved vital as negotiations throughout the 1970s stalled repeatedly. The main conflict was between poor nations, which demanded a share in seabed resources, and wealthy nations, which advocated that exploitation of those resources be left to private enterprise. Said Michael MccGwire, a senior fellow at Washington’s Brookings Institution: “She managed by her own personal stature to engender the trust of the Third World.”

It was a personal victory as well as a major international event when 159 nations signed the Convention on the Law of the Sea in Jamaica in 1982. But Borgese says she is disappointed by the sluggish progress on its two main

resolutions: the drafting of a Seabed Authority to regulate ocean development and the establishment of an international tribunal to arbitrate disputes. Indeed, the convention has been ratified by little more than half of the 60 nations required to bring it into force. Canada, one of the signatories, has failed to ratify it. Said Borgese: “We have the opportunity to create a model organization for the next century. It is unfinished business.” But friends say that her global vision has often run ahead of the more cautious expectations of national bureaucrats. Noted MccGwire: “A lot of people in governments find her attempts to hold them to their own rhetoric a pain.” Still, Borgese’s work on ocean rights is only one of many urgent subjects to which she devotes her time. Indeed, she says she is intent on seeing precedents set by the Law of the Sea—a sharing of the world’s natural resources—applied in other fields, including the development of outer space. Such international co-operation, she says, will create the kind of world that her father and husband advocated. “It is a crisis,” said Borgese of current world tensions, “but it is during times of crisis that new concepts have a chance to unfold.” 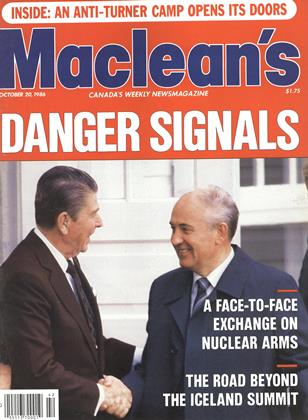