They were born in the same Montreal district and attended the same university, but the similarities end there. In most respects, Jean Drapeau and Jean Doré are polar opposites. During his 29 years as mayor of Montreal, Drapeau’s autocratic style and enthusiasm for public megaprojects became legendary. Intensely private, he has worked 16-hour days and seven-day weeks. By comparison, the garrulous Doré, the leader of the opposition Montreal Citizens’ Movement (MCM), represents a left-leaning, grassroots brand of politics and his opponents describe him as a “socialist yuppie.” He takes time to cook and play hockey. Despite those differences, Montrealers appear poised to choose Doré to replace the retiring mayor when they vote in the city’s municipal election on Nov. 9. But said Manon Vennat, president of the Montreal Board of Trade: “Drapeau’s vision of Montreal has come to fruition, and now, no matter who wins the election, there will be a tremendous change one way or another.”

of Canada’s second-most populous city. Both Doré and his opponent, Claude Dupras, Drapeau’s successor as head of the ruling Civic party, have pledged to allow more public consultation in the traditionally secretive decisionmaking process at city hall. As well, both leaders say that they would begin programs to make the city’s mostly male police and civil service more accessible to women and to the 35 per cent of non-French Montrealers. Said Vennat: “There is a new generation of leadership that will emerge from this election.”

Still, there are some important issues on which the candidates are opposed. In the current debate surrounding the area’s two airports, Doré favors making nearby Dorval the prin| cipal facility, while Du¿ pras has lobbied for a S high-speed rail link between Dorval and Mirabel. The two are also split on the controversial language debate. Dupras advocates permitting bilingual signs throughout the city, while Doré favors a more limited policy that would allow languages other than French to be included on signs in certain businesses.

Typically, campaign tactics have extended beyond city issues. Both Du-

pras, who is a former president of the Quebec wing of the Progressive Conservative Party, and Drapeau have made frequent reference to Doré’s background as a union labor lawyer and press aide in 1970 to Parti Québécois leader René Lévesque. As well, Drapeau created a furore last month when he made reference during a CBC television interview to Montreal’s VLB Editeur Inc., which published a book written by Doré. VLB is owned by Jacques Lanctôt, a convicted kidnapper and former member of the terrorist Front de libération du Québec (FLQ). Snapped a furious Doré: “If [Drapeau] is trying a smear job, it is of the lowest kind.” Last week Lanctot filed a libel suit against Drapeau and Radio-Canada for the remarks. Doré contends that he left the PQ in 1972 and that the MCM “has members in every provincial and federal party, but no favorites. We are neutral.”

In fact, despite the Civic party’s commanding hold on city council, where it holds 40 seats to the MCM’s 14—there are three independents—the swipes against Doré have not hurt his popularity among voters. In mid-October the polling firm SORECOM conducted a public survey that gave the MCM 73 per cent of the vote and the Civic party 26 per cent.

The MCM’s rise in popularity parallels its steady march toward mainstream politics since its formation 12 years ago. Then, the party program included plans to abolish fares on the city transportation system. Currently, MCM members favor neatly pressed suits instead of jeans and sandals, and its election jingle urges listeners to vote MCM to “make Montreal prosperous.” Doré has spent the past year reassuring businessmen that the party is eager to work with them. Still, independent councillor Nick Auf der Maur, who helped found the MCM and left it two years later after a squabble over party policy, declared, “They may dress a bit better now, but scratch past the surface and you still find the kind of trendy lefties whose idea of heaven is to replace every street in the city with bike paths.”

But encouraged by the polls, MCM members are already preparing for a victory. Said Doré: “We are going to do a lot of things, but not overnight. This is going to be a change, not a revolution.” Still, after 30 years of rule by one man, to many Montrealers any change will seem revolutionary. 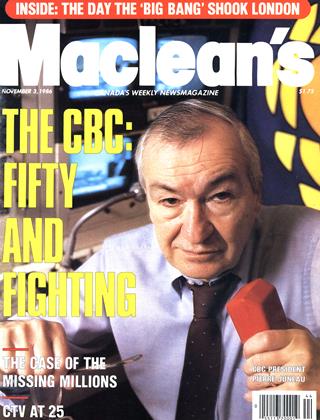