There are several ways a man can be eviscerated by a book. Probably the most effective is one when he assays to write about himself, the resulting suffocating mass too often a case of self-immolation. A case of ego overload. Just as a lawyer who acts for himself has a fool for a client, only the most skilful should be allowed to write about themselves.

The second method of attack is the knife job.

Kitty Kelley’s meticulously detailed destruction of Frank Sinatra is our most recent example, there being more than enough details to hand. The third method, requiring great control by the chap at the typewriter, is simply to put down the record, dull detail by dull detail.

This is the (successful) method used by Vancouver literary critic Alan Twigg in the first instant book produced on Bill Vander Zalm, who is introduced on the book jacket by a quote from an astute critic calling him “the most unusual premier Canada has produced since René Lévesque.”

The book, Vander Zalm: From Immigrant to Premier, would never be mistaken for Tolstoy, but it gets the job done. It just records what the boy has done and said, and it unconsciously makes for mirthful stuff. Twigg, who has written three previous books in the literary field, admits that he is a neophyte in the political arena and so simply relies on the dull old field of research and delineates the remarkable rise of The Slam from boyhood in the Netherlands to boss of Lotusland. The author almost never deviates from his stiff-upper-lip approach—referring to his subject as “the Ricardo Montalban of B.C. politics” being a rare exception—and instead wisely lets the record speak for itself.

It is not a pleasant sight, save for

those writing a master’s thesis on the arcane art of telepolitics. As the author remarks, Vander Zalm arrived in the premier’s chair, after 20 years of being the most controversial politician in British Columbia, as a largely unknown quantity. He is like quicksilver. He’s hard to pin down mainly because he darts and shifts philosophically like a water bug. A municipal politician who knows him well from Vander Zalm’s early days as a mayor of a Vancouver suburb says: “I’d say his prejudices are sincere—at least that day. He’s a political animal. He’s not in it

to improve humanity. He switched from the Liberals to the Socreds without hesitation when it suited him. If socialism became popular, he’d be a socialist tomorrow.”

The most remarkable premier was born in the Netherlands from a background of well-to-do dairy farmers on his mother’s side and a prosperous bulb business on his father’s side. His father was travelling abroad when war broke out, chose not to return to the Netherlands and formed the lucrative base for the nursery business that gave Bill a handy running start when the family joined father in B.C. after the war. He did not drop out of Grade 7, as once mistakenly stated on this page. It was wife Lillian who did, Lillian who took three years to finish reading the last book she could recall and couldn’t remember either author or title. Bill is remembered by high school mates as a “sweet talker” who was always “putting on the dog.” His school annual, noting his stylishly

slicked hair and the fact that he “likes to be surrounded by beautiful girls,” predicted he would own a large modelling agency. (In a way, does he not now?)

There has been a consistent pattern to Vander Zalm’s rise. As Twigg notes, “Rules have been bent and laws have been broken.” Even while he was a minister in the Social Credit government, he built an addition onto one of his gardening stores without a building permit. Warned by authorities that he was violating a municipal bylaw, he refused to comply. He received the minimum penalty. When his two brothers violated agricultural land-zoning laws, Vander Zalm—then the municipal affairs minister—intervened on their behalf.

Three Vander Zalm brothers had to plead guilty after being charged with illegally dumping pollutant. When Bill was mayor of the Vancouver suburb of Surrey, his own council once voted to investigate him on conflictof-interest charges. President of a widely active consortium of relatives, o Vander Zalm somehow escaped like Houdini from various family municipal messes—identified by the author as the Manning Kiess Mess, the Missing Newton Dirty Sewer Link and the Hazelmere Smear. Two days before the then-NDP government was to bring in a deadline on public disclosure legislation designed to protect the public from political conflicts of interest, Vander Zalm quit the Liberals and joined Social Credit.

His cavalier attitude toward the law is accompanied by another characteristic: stubbornness—which is both a strength and a weakness common to the Dutch. Earlier in his career (running for Parliament in 1968 in hopes of riding on Trudeaumania, running for leadership of the B.C. Liberal party among other things) he lost three times in seven years. Later he was to lose yet again when he tried for mayor of Vancouver. He simply comes back smiling. He’s a hard man to insult. He essentially doesn’t have any beliefs. As such, he’s insensitive. You can’t insult a man who doesn’t believe in anything.

The application of democracy sometimes gives me trouble. 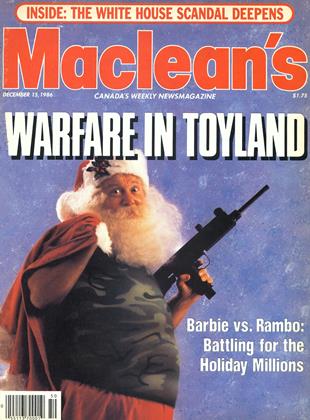