They come fully assembled, are available in all sizes and are easy to wrap. Ideal holiday presents, this year’s collection of gift books includes everything from Antarctic mountains to the paintings in the Sistine Chapel.

Matching a suitable book with names on a gift list is relatively easy; narrowing the selection to one book per person may prove more difficult.

One of the season’s most cleverly conceived large-format books may be Peace: A Dream Unfolding (Lester & Orpen Dennys,

$35), edited by Penney Kome and Patrick Crean. Pleading its antiwar case with eloquence, Peace contains entries from figures as diverse as Martin Luther King, Margaret Atwood and several retired NATO generals. Photographs of such horrors as the bombing of Hiroshima are balanced by strategies for combatting the arms buildup. Illustrations include the magnificent stained-glass window designed by Marc Chagall in memory of United Nations secretary general Dag Hammarskjöld. At once deeply spiritual and hard-headedly practical, Peace deserves a wide and attentive readership.

That same delicate balance of visual delight and textual power is also featured in Ndebele (Methuen, $69.95), photojournalist Margaret Courtney-Clarke’s striking photographic survey of the arts of the Ndebele, a tribe of South Africa’s Southern Transvaal. Its highlights are the vivid wall paintings—some as intricate as Navajo blankets, others as spare as Mondrian’s geometric paintings—that Ndebele women draw freehand to decorate their homes. But CourtneyClarke’s gorgeous book is also a record of a dying culture. The Pretoria government is stripping the Ndebele of their South African citizenship and relocating them in an arid homeland, leaving their buildings to slide into ruin.

Other books are simply unalloyed celebrations of earthly delights. Fra Angelico: The Light of the Soul (Canadian Manda Group, $105) by Jacqueline and Maurice Guillaud brims with radiant illustrations. The book’s reproductions do justice to the luminous

Meanwhile, the art of 16th-century Italian master Michelangelo appears in an illusionshattering light in The Sistine Chapel: The Art, the History and the Restoration (Canadian Manda Group, $84), a massive collaborative effort by nine international art experts and historians. For centuries critics have described Michelangelo’s paintings of muscular human figures on Vatican’s City’s Sistine Chapel ceiling as the work of a superlative draftsman—but a curiously bland colorist. Now, a major restoration program still in progress has revealed the startling vibrancy of Michelangelo’s original colors, buried beneath 500 years of dust, candle soot and varnish. The Sistine Chapel’s illustrations are opulent and powerful. But its ponderous text is only for readers willing to wade through a detailed dissertation on whether Michelangelo painted the chapel ceiling lying down or standing up.

Far less preachy is a new collection of lithographs by Russianborn artist Marc Chagall, who died in 1985 at 98. Lithographs VI (Canadian Manda Group, $119), the sixth and final volume in an epic series, is a testament to Chagall’s unflagging creativity. In his 93rd year he printed 33 separate lithographs, including 14 oversized editions—a prodigious feat for any artist, let alone a nonagenarian. All have been lovingly reproduced, along with the rest of Chagall’s last works, some of which were left unfinished when he died. The book is a handsome tribute to one of modern art’s giants.

Arguably the 20th century’s most important artist, Pablo Picasso also receives homage in book form this season. If his life-work

can be said to resemble a continent, then the artist’s sketchbooks are messages from the unknown interior. “When it isn’t me anymore who is talking but the drawings I made, and when they escape and mock me, then I know I’ve achieved my goal,” said the master. Je Suis le Cahier: The Sketch-

books of Picasso (McClelland and Stewart, $90) reprints six of the known 175 Picasso sketchbooks, as well as random selections from the rest. The material ranges from the fluently refined through the deliberately regressive and even includes a laundry list.

In some ways, the gardening columns English poet and novelist Vita Sackville-West wrote in The Observer between 1946 and 1961 seem more intriguing now than when they were written. The 144 articles reprinted in V. Sackville-West: The Illustrated Garden Book (Penguin Books, $29.95) are pieces of exquisite craftsmanship, based on her experiences in her own garden at Sissinghurst Castle in Kent. In one entry, a trowel full of earth reveals a subterranean world of “scrambling and wrestling life”; in another, the buds of a white rose suggest “curled shavings of marble. If one may imagine marble made of the softest ivory suède.” Sackville-West’s simple, practical advice has limited relevance for Canadian gardeners, but her deft handling of pitchfork and pen alike make this anthology a fine alternative to plastic mistletoe.

Some of the most popular coffeetable books are those that, like family photo albums, conjure up memories of recent travels. That may be why The Expo Celebration: The Official Retrospective Book (Whitecap Books,

$39.95), a salute to the exuberant pageantry of Vancouver’s Expo 86 featuring the work of 42 photographers, has already sold 115,000 copies since its October release.

written, photographed and published by a husband-and-wife team who know the valley well, Pat and Rosemarie Keough. Along with striking but predictable images of summer sunsets and barns in the snow, they have captured such local secrets as a golden amber edible fungus known as Chicken-ofthe-Woods.

Each Christmas brings at least one coffee-table tome celebrating coast-tocoast Canada. This year there are two. Canada: From Sea unto Sea is an encyclopedic, entertaining overview of the nation’s geography, history and culture by 40 contributors, including author Peter C. Newman, members of the Monarchist League of Canada and novelist Maj.-Gen. Richard Rohmer. In TransCanada Country: A Photographic Journey (Collins, $39.95), a collection of photographs threaded to the theme of the Trans-Canada Highway, Manitoba photographer Brian Milne has avoided the clichés. Instead of rippling prairie wheat fields, Milne focuses on the worn faces of truckers, a horse loping along a rail line, snoozing hitchhikers. To prepare Trans-Canada Country, he made five coast-to-coast trips. His patience—aided by a keen eye—has paid off.

Patrick Morrow, a mountaineering writer-photographer from Kimberly, B.C., embarked on an even more ambitious excursion. Beyond Everest: Quest for the Seven Summits (Camden

House, $19.95) documents his conquest of the highest peaks on each of the seven continents. The most gripping account describes a 1982 ascent of Mount Everest which was marred by four deaths on the treacherous Khumbu Icefall. Morrow’s text is at times plodding, but it describes an unforgettable adventure. His descriptions of the lowland approaches to the summits are often as compelling as the final steps to the top.

Finally, a gift book that is an expedition into nostalgia: at $35, The Beatles: A Celebration (Methuen) may well be the season’s most expensive trivia offering. Compiled by Geoffrey Giuliano, an American collector of Beatles’ memorabilia, it features Beatle bubble-gum cards, posters and record jackets, all lavishly reproduced in color. The book’s few fresh facts come from in_ terviews with such obscure = figures as Paddy Delaney, the " bouncer at Liverpool’s Cavern Club, and Shambu Das, George o Harrison’s sitar tutor. True § fans will be better served lisz tening to their favorite Beatles album, while turning the pages of one of this season’s other gift book treasures. 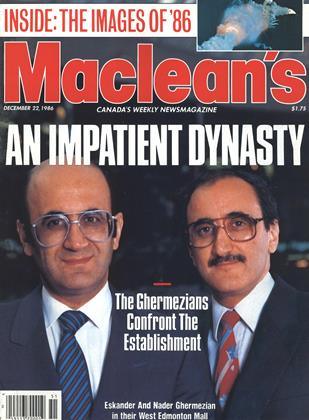