Since Soviet leader Mikhail Gorbachev launched his campaign to liberalize Soviet society last February, Western analysts have been waiting to see if the reforms would benefit the country’s most famous dissident, Andrei Sakharov. For the past seven years pleas by Western governments and human rights groups for Sakharov’s release from internal exile in the closed city of Gorky, 400 km east of Moscow, have gone unanswered. But last Friday the Kremlin announced that the 65-year-old scientist and his 63-year-old wife, Yelena Bonner, could soon return to Moscow. For some Sovietologists, it appeared that Gorbachev’s policy of glasnost (openness) had passed a crucial test.

The surprise announcement of the Sakharovs’ release came soon after another sign of the new mood in Moscow. In an unprecedented move, the official news agency TASS reported on serious anti-Russian rioting in Alma Ata, the capital of the remote, largely Moslem Soviet Republic of Kazakhstan. Since the 1920s no reports of ethnic minority discontent have been permitted. While Western diplomats in Moscow called the TASS report extraordinary, outgoing U.S. Ambassador Arthur Hartman hailed Sakharov’s release as “a wonderful development.”

Still, some Kremlinologists remained skeptical of Gorbachev’s intentions, citing the recent death in a Soviet prison of another well-known dissident, Anatoly Marchenko, 48. And White House spokesman Larry Speakes pointed out that “countless others remain incarcerated for no reason other than their desire to express

Until 1968 Sakharov was an honored member of the Soviet establishment. As the Soviet Union’s leading nuclear physicist, his work was instrumental in developing the country’s first hydrogen bomb in 1953. But after he published an essay including criticism of Soviet internal repression 18 years ago, the Kremlin began a publicity campaign against him and kept him under constant surveillance by the secret police, the KGB.

and for Sakharov to resume his work with the Academy of Sciences— followed the release of a number of other prominent Soviet dissidents. Last Thursday poet Irina Ratushinskaya, 32, was allowed to leave for Britain after serving part of a labor camp sentence for alleged anti-Soviet propaganda. In October physicist Yuri Orlov and geneticist David Goldfarb were allowed to go to the United States, and last February human rights activist Anatoly Shcharansky arrived in Israel.

The graphic reports of the Kazakhstan riots fitted in with Corbata chev’s new policy of allí lowing more informaztion on domestic I troubles. Within hours I of the uprising, TASS deo scribed attacks by Moslem Kazakhs: they burned cars and looted shops in protest against the appointment of a Russian to succeed their longtime Moslem local Communist Party chief. Gorbachev has even permitted media criticism of Soviet policies and the publication of some critical novels and poetry.

Most Western leaders were cautious in greeting the Sakharov release. At the 35-nation European Security Conference in Vienna, chief U.S. delegate Warren Zimmermann called the release of the Sakharovs “an important, positive gesture.” But he added that the Soviets should now move from gestures to practice and comply fully with the human rights provisions of the 1975 Helsinki Agreement. A similar note was struck in Ottawa by Canadian External Affairs Minister Joe Clark. “There have been some dramatic symbols offered,” he said, “but no change of substance yet.”

According to Dmitri Simes, one of the United States’ most influential Kremlinologists, the Sakharovs were likely freed because they were in such poor health that the Soviet authorities feared they might die in exile. “That would be a tremendous public relations disaster for Moscow,” said Simes. Still, said Adam Ulam, head of Soviet Studies at Harvard University, “I think it points to Gorbachev being more sensitive to public opinion in the West—and that must be a good thing.” 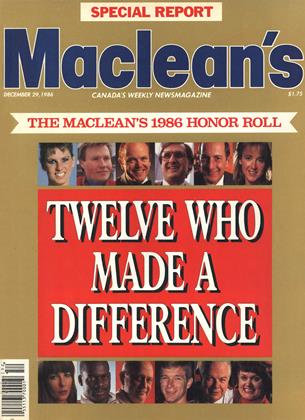