For a generation grown accustomed to dazzling technological achievements, the accomplishments of American space missions had become almost commonplace. Until last week lift-offs and landings, moon walks and satellite rescues took place with such precision that major TV networks stopped live shuttle coverage, confining their reports to regular news broadcasts. But that easy acceptance disappeared in an instant on Jan. 28. On that day, after 24 successful shuttle missions, the orbiter Challenger disintegrated in an orange fireball which killed all seven astronauts. Challenger’s fiery destruction—recorded on videotape and broadcast around the world—was a reminder of the grim price sometimes exacted to push back

Massive: Last week’s accident demonstrated the deadly flaws buried in the shuttle’s complicated machinery, and it also rekindled a decades-old debate on the merits of manned versus unmanned space missions less than a week after the unmanned Voyager 2 sent back its spectacular photographs from Uranus. Indeed, the disaster focused critical attention on the entire U.S. space effort and its shuttle project—a program with a history of massive cost overruns, frequent delays in scheduled launchings and several neardisasters.

And as the National Aeronautics and Space Administration (NASA) searched the Atlantic near Cape Canaveral for fragments of the destroyed spacecraft there were suggestions that the crash investigation would do more than delay future launches. For one thing, the U.S. defence department—a prime user of the shuttle service—may return to rocket boosters to place its military satellites in orbit. For another, some customers—facing a dramatic rise in already high insurance rates for satellite placement after Challenger’s fiery end—may place their hardware aboard Ariane rockets fired by the European Space Agency—NASA’s main competitor for space business. But supporters of the manned space program insisted that the accident was a tragic but temporary setback. Said U.S. astronaut Eugene Cernan, who in December, 1972, was the last man to walk on the moon: “Exploration without man is not exploration at all.”

Americans must go now where they so valiantly tried to lead, a fitting place, Fve always thought, for Americans: the stars and beyond.” Still, administration officials acknowledged that the Challenger tragedy will likely lead to a close examination of NASA’s budget. And White House spokesmen confirmed that the administration was considering establishing an independent study of its goals in space.

‘Excessive’: For the past five years the U.S. thrust into space and the shuttle program have been practically synonymous. But even though NASA

mounted a major public relations campaign designed to secure continuing visibility and support—in large part by selecting passengers ranging from congressmen to foreign astronauts for rides into space —influential U.S. scientists and politicians have withheld their support. Among the shuttle critics: James Van Allen, the eminent physicist who in 1958 discovered the radiation belts, which now bear his name, surrounding the earth. Declared Van Allen: “The progressive loss of U.S. leadership in space science can be attributed largely to our excessive emphasis on manned space flight.”

Thrill: Indeed, shortly before Challenger blew up, Van Allen objected to the money spent on the shuttle program at the expense of such projects as a satellite inspection of Halley’s comet. In an article he wrote for the influential

journal Scientific American last month, Van Allen said that the funding had resulted in “a slaughter of the innocent: massive cuts, postponements and cancellations of dozens of programs.” And Cornell University astronomer Thomas Gold added last week: “The shuttle is a disaster, an extremely unsatisfactory vehicle. Serious research was a small adjunct.”

Still, in the space rivalry which erupted between the United States and the Soviet Union during the 1950s, successful manned flights came to represent a vindication of U.S. technology— and the superiority of the American way of life. But the Soviets seized an early lead, achieving such propaganda coups as the first satellite in orbit (Sputnik in 1957) and the first man in space (cosmonaut Yuri Gagarin in

1961). Then, in 1961 President John F. Kennedy committed his country’s resources to placing a man on the moon before the end of the decade—a goal achieved when Apollo 11 astronauts Neil Armstrong and Edwin (Buzz) Aldrin stepped down from their lunar module, the Eagle, on July 20, 1969. And it was during that heady era that the first “reusable launch vehicle” took shape as part of NASA’s ambitious and detailed program for manned

In 1966 a breathtakingly ambitious NASA plan called for an orbiting

manned space station to be in full operation by 1972, a lunar station

three years later and a manned landing on Mars by 1986. As its

name implies, the shuttle was a minor part of that sweeping blueprint-little more than a space workhorse ferrying crews and supplies to the orbiting space station. But by 1972, with the moon shots fading into memory and an increasingly costconscious Congress examining space expenditures, NASA proposed a less expensive program and a scaled-down space station. At the same time, the agency proposed a more important role for the space shuttle: making it a satellite launcher instead of a simple cargo carrier.

Malfunction: That plan, supported by an influential study conducted by Mathematica Inc., a firm of economic analysts from Princeton, N.J., swiftly won

But five years after the first successful launching on April 12, 1981, the agency has managed only 24 missions by the four shuttle craft it commissioned-each one of which cost $2.2 billion to build. And in April, 1983, when the doomed Challenger made its

maiden voyage, NASA estimated that it was routinely spending $250 million to stage every flight, each of which produced a maximum revenue of only $42 million. Indeed, 1986 forecasts indicate that commercial customers were expected to pick up less than one-seventh of the cost of the 15 missions which had been scheduled this year.

A malfunction in one of Columbia’s backup computers delayed the program’s first flight for two days. And moments before its second launch seven months later, clogging in two filters feeding lubricating oil to the spacecraft’s hydraulic lines resulted in an eightday delay. Despite those problems, shuttle officials expected to achieve some significant goals this year.

Among them: a latesummer mission to place a $1.1-billion optical telescope in orbit. And until last week NASA’s plan to

But until the agency completes its inquiry into Challenger’s fatal malfunction, the three remaining shuttle craft will remain grounded. As well, a lengthy delay in shuttle launches could result in the defence department and important civilian customers taking their business elsewhere.

Even before Challenger exploded, the technical problems which have affected the shuttle program had led the U.S. defence department to study alternative methods of launching its space hardware. And last year the Pentagon won congressional approval for a $100-million program to convert Titan II rockets into satellite launchers carrying up to four military satellites into space each year. One defence department official, who asked not to be named,

The investigation that followed the Apollo accident took six months to

complete and caused a nine-month delay in the drive to put a man on the moon. Said the Pentagon official: “We wouldn’t want to wait that long.” And some observers of the shuttle program, including Robert Bowman, president of the Washington-based Institute for Space and Security Studies, object to the shuttle being used as a freighter.

Declared Bowman: “NASA has been wasting the abilities of man by having the shuttle launch communications satellites. That’s a business the shuttle should get out of.”

Advice: If NASA accepts that advice, the Paris-based European Space Agency (ESA), a consortium of 11 countries

which began launching satellites with unmanned Ariane rockets in 1982, is ready to accept customers. Still, Arianespace official Claude Sanchez said that it would be “indecent to even start thinking that the shuttle disaster might bring more orders our way.” But the ESA competes aggressively with

NASA and has 28 satellite launch bookings worth $900 million until December, 1987. It plans to send communications equipment into space aloft the Ariane 1, a rocket which cost only $850 million to develop and has already successfully launched 10 satellites at an average fee of $32 million.

backs. Last September technicians at the agency’s launch site in French Guiana had to destroy a rocket that had twisted off course and threatened to crash on populated parts of Brazil. In that incident, two satellites valued at more than $50 million were lost in an explosion, which intensified concern among insurance companies over their ability to provide coverage of hazardous space ventures. Indeed, a spokesman for Lloyd’s of London noted that in 1984 insurance companies had paid out $385 million to the owners of

satellites which had gone missing in space or malfunctioned after being launched. And the dramatically rising costs of insuring a satellite are another stark indication of the reappraised risks of lauching communication equipment into space.

had a 100-per-cent safety record before last week’s disaster. But an ABC TV poll conducted within hours of Challenger’s disintegration found that 79 per cent of Americans favor the continuation of manned space flight. Said former NASA assistant administrator David Williamson, for one: “If our entire hope lies only in machinery, without men, a sense of real adventure, as well as a sense of real accomplishment, is lost.” The seven men and women aboard Challenger clearly shared that be-

lief. But their fate has

added an arresting new perspective to the debate over the rights and responsibilities that humanity has in a world beyond its own. 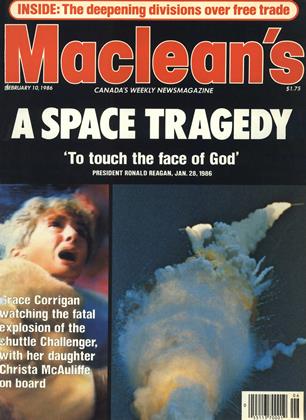