The scriptwriters of Norma Rae, a 1979 film about one woman’s fight to organize a textile union, would have been hard pressed to match the real-life conclusion of a bitter 239-day strike for a first contract at the Canadian Imperial Bank of Commerce (CIBC). The finale began on Jan. 27 with a landmark Canada Labour Relations Board ruling that imposed a one-year settlement on both sides—a decision that delighted 213 charge-card clerks and mail room em-

ployees in the Toronto-based Visa headquarters. But that jubilation waned two days later when the CIBC appealed a board order requiring the bank to place the strikers in their old jobs by Feb. 10. Then, last week, barely 36 hours before a scheduled hearing in the Federal Court of Appeal, the board released the details of the settlement and the bank withdrew its appeal. Those events allowed the 1,200-member Union of Bank Employees to score a major breakthrough in a decade-long struggle to penetrate the seven main chartered banks, which employ 147,000 nonunionized workers.

For their part, CIBC spokesmen said that the bank had achieved some success because the five-per-cent increase will apply to only a third of the charge-card clerks and mail room employees. As well, the spokesmen noted that the board had upheld the bank’s

right to continue granting merit increases beyond the minimum scale, and said the bank was pleased that the contract includes a section spelling out the rights of management. Declared CIBC public relations manager Everett McCrimmon: “I am not arguing that the union didn’t make any gains, but we’re very happy with the board’s decision. Our only concern was the manner in which the board ordered the employees back to work before either they or we had any idea

The former strikers were quick to underline the major gains: layoffs

based solely on seniority and recognition of their bargaining unit, Local 2104. And as the members returned to work the union’s powerful backer, the two-million-member Canadian Labour Congress (CLC), intensified a drive to at least double union representation in Canadian banks by 1987.

The protracted Commerce dispute began at noon on June 12, 1985, at the bank’s Toronto offices. At that time 163 Visa clerks—about 80 per cent of them women, many of them recent immigrants and single mothers—rose from their desks and walked out. Three months later they were still out and there was no sign of a break in the struggle as the Visa centre continued to operate with nonunion employees—

including 90 clerks who had refused to join the strike. Then, in a separate dispute 50 mail room employees joined the striking Visa clerks on the picket line. But it was not until Dec. 21, when federal Labor Minister William McKnight ordered the three-member board to intervene in the dispute, that the two small groups of strikers began to hope for a break in a frustrating—and costly—stalemate. For one thing, the CLC had spent $1.8 million in an all-out effort to break into the traditionally nonunion service sector, providing each striker with $300 in tax-free strike pay each week—an amount often higher than the wages the pickets received from the bank.

Many union executives say that subsidy was a crucial element in a confrontation notable for tough tactics on both sides. In addition, the strikers tried to jam telephone lines at the Visa centre with more than 20,000 calls each day. And their cause got s a public relations boost

when it was revealed that Commerce officials had closed and refunded the accounts of David Reville, a New Democratic member of the Ontario legislature, because he participated in

two demonstrations against the bank—an action for which bank chairman Donald Fullerton apologized before an all-party committee of the legislature. Although organized labor claims only one per cent of the employees at the seven major banks, the CLC has been encouraged by another success that began last July at the Commerce’s Visa headquarters—signing up 300 mortgage clerks to apply for certification in the same local. Said CLC organizer Ralph Ortlieb: “Five years from now, when there’s 10,000 organized bank workers in Canada, we’ll see that this contract really was a major triumph.” But with only 10 Union of Bank Employees units among the Commerce’s 1,560 branches, labor still faces formidable odds in its struggle to organize the industry. 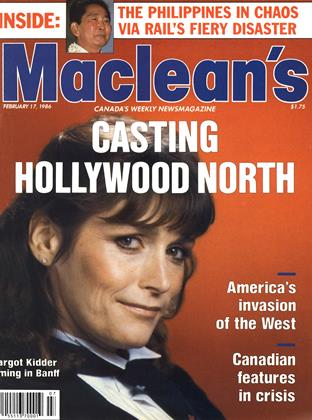