There was a clear note of disappointment in a Canadian University Press (CUP) story which ran in student newspapers late last month. Under the headline “Pension plans for the old at heart,” the article quoted a Bank of Nova Scotia employee in Montreal who said that 30 per cent of her customers for Registered Retirement Savings Plans are now under 30. To the news service at least, that development confirmed—again—that cautious conservatism has replaced 1960s-style activism on campus. Still, many students have rallied to a single cause this year—opposing the racist policies of the South African government. And on such campuses as McGill University and the University of Toronto the movement has resorted to noisy demonstrations, sit-ins and bomb threats. Said Ottawa-based CUP national bureau chief Peter Kuitenbrouwer: “Apart from RRSPs, South Africa is the only really unifying issue that students have right now.”

South Africa’s domestic policies— which opponents condemn because they withhold rights from the country’s black and mixed-race “colored” populations—have been the subject of intense debate on North American university campuses for years. But widely reported riots by South African blacks last year in which more than 800 people died have fuelled opposition to apartheid. Students are now urging university administrations to sell shares in companies doing business in

South Africa and protesting against South African government speakers on campus. Said Neil Smelser, a sociology professor at the University of California at Berkeley who has chronicled social protests since the early 1960s: “This movement has come as a tremendous boon to frustrated student radicals who haven’t had a cause to sink their teeth into. South Africa is very far away and all the violence is over there. It is a motherhood issue.”

Demonstrations against South Africa have spilled beyond the ordered confines of campus debating societies. For one thing, Glenn Babb, South Africa’s ambassador to Canada, narrowly escaped injury at the University of Toronto last November when an elementary schoolteacher threw a ceremonial mace at his head. Police charged the man with assault and the university invited Babb to resume the interrupted debate on apartheid.

Four U of T professors then tried unsuccessfully to obtain an Ontario Supreme Court interim injunction banning Babb from speaking on the campus because they said that his appearance would violate Canadian hate laws. And mounted police had to control an angry crowd of 300 demonstrators when Babb, wearing a bulletproof vest, returned to the university on Jan. 31. The ambassador managed to deliver a hurried defence of South African policies, but now students at Ottawa’s Carleton University say they are determined to stop him from airing his

country’s policies on control of the press at an upcoming debate in the university’s school of journalism. As well, opponents of apartheid want to inflict financial damage on the South African regime. To that end, 74 U.S. colleges and universities have decided to withdraw some or all of their investments (totalling almost $600 million) from companies doing business in South Africa, according to the American Committee on Africa, a New Yorkbased lobby group. In Canada, where few universities have large investment portfolios, the issue has been slower to catch on. Last November McGill became the first Canadian university to adopt that tactic: it withdrew about $40 million. Dalhousie University of Halifax adopted the same policy in January. And Nigel Crawhall, chairman of the McGill students’ South Africa committee, noted that the issue had led to the largest demonstration at the university in 10 years.

The anti-apartheid demonstrations may have more personal motivations. Such observers as Pamela Cross, a Kingston, Ont., school trustee who helped to organize a demonstration against another South African diplomat’s visit to Queen’s University earlier this month, says that the cause has become popular partly “because it allows student^ to confront administrations.” But she added: “As an activist who has been involved in a lot of causes over the years, I feel we have to take advantage of every opportunity we get. There is no way any Canadian can say he is not aware of what is happening in South Africa now. That is why we have jumped on this issue.” 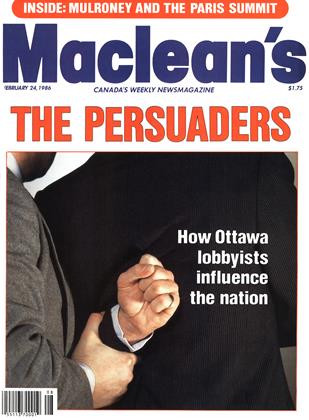