The picture that Ronald Reagan presented to the world as he emerged from Bethesda Naval Hospital was one of jaunty confidence. Wearing a windbreaker after the surgery that removed three polyps from his large intestine only six months after the discovery of cancer of the colon, the grinning President flashed a “thumbs-up” sign as he boarded a helicopter to recuperate at his weekend retreat in Camp David, Md. But sources close to Reagan have confided to friends that—despite tests which revealed that the polyps and a patch of facial skin were not malignant—the President was in fact more exhausted and depressed about his recurring health problems than the public image indicated. This week, in the President’s annual televised state of the union address to Congress, the upbeat tone of the unusually short, streamlined speech that Reagan prepared could turn out to be equally deceptive.

As Congress reconvened last week Capitol Hill lawmakers said that Reagan faces the toughest and most turbulent session of his five years in office. In fact, the President will have to attempt to win support for a series of contentious measures in a year when November’s midterm elections threaten to cost the Republicans control of the Senate. Complicating that confrontation is a revolutionary new budget-balancing law commonly known as the Gramm-Rudman Act, after Senate Republican sponsors Phil Gramm of Texas and Warren Rudman of New Hampshire. It was signed by Reagan in December but is now being challenged by his justice department as unconstitutional.

Under its provisions—so drastic that one Boston academic nicknamed it “Gramm-Rambo”—if Congress does not cut the annual federal budget deficit of more than $200 billion to comply with a series of declining ceilings over the next five years, legal machinery will automatically take over to slash spending across the board. That will force reductions in social assistance and military programs alike. The Republican chairman of the Senate budget committee, Pete Domenici of New Mexico, last week declared that such a crisis could occur as early as next fall. He warned that it could lead to chaos in financial markets, a recession and “a national, and even international, tragedy.”

To avoid that, Reagan faces a daunting challenge: how to reduce the deficit enough to satisfy the law without scaling back his military buildup or breaking his vow not to raise taxes. Last week, as he appealed to rebellious Republicans for compromise, many Democrats predicted a bitter struggle that threatens to stalemate the remaining three years of Reagan’s second term. Said House Speaker Thomas (Tip) O’Neill: “The time for taking the hard knocks has come for Mr. Reagan.”

In fact, the President’s physical and political vulnerabilities coincided with the approach of his 75th birthday on Feb. 6, but at a time when his personal rating has never registered higher in the opinion polls. Still, ever since his landslide re-election in November, 1984, he has been unable to translate that popularity into the legislative strength with Congress that dazzled followers and skeptics alike during his first term. The “fresh start” that Reagan promised in his second inaugural address a year ago quickly disintegrated into deadlock. After asking for a six-per-cent increase in defence spending, he was forced to settle for no increase at all. As the White House went through a series of staff changes and tried to adapt to the controversial corporate management techniques of chief of staff Donald Regan, Congress seized the foreign policy initiative. It forced Reagan into humiliating compromises over his demand for $14 million in aid to rebels fighting the Nicaraguan government and over his earlier opposition to sanctions against South Africa.

Some analysts say that it is, in fact, a series of crises that have maintained Reagan’s public support. Said one White House aide: “You know what the saving grace has been? The summit, the TWA hostage crisis and cancer.” Indeed, buoyed by a massive show of public affection after cancer surgery in July to remove two feet of his colon, and following the negotiated release of American hostages from the TWA airline hijacking in June and the capture of the Achille Lauro cruise liner terrorists in October, Reagan emerged from the first U.S.-Soviet summit of his presidency in November as a winner at home. His fireside chats with Soviet leader Mikhail Gorbachev in Geneva tempered widespread perceptions of Reagan as an intractable hawk who might lead America into a nuclear war. Indeed, Republican pollster Richard Wirthlin reported that Reagan now has higher opinion ratings for his handling of foreign affairs than for other aspects of his administration. But that vote of confidence at home has had little apparent influence in foreign capitals. Reagan failed to win allied support for sanctions against Libya—a nation he claims supported terrorists responsible for the Christmastime airport attacks in Europe.

In fact, the very success of the summit may prove to be an obstacle at a follow-up meeting later this year. Public pressure will then be on Reagan to move toward an arms control agreement. Said retiring Republican Senator Paul Laxalt: “The get-acquainted stage is over. People are going to start looking for concrete results.”

Earlier this month Gorbachev again attempted to seize the public relations initiative by unveiling a proposal “of historic significance” to eliminate all nuclear arms by the end of the century. U.S. arms experts examined the Soviet leader’s proposed freeze of British and French nuclear arsenals in exchange for the elimination of Soviet and U.S. medium-range missiles from Europe. Still Helmut Sonnenfeldt, a foreign policy adviser to the Nixon administration, contended that Reagan had succeeded in defusing the Soviet attempt at a public relations coup. “The Soviets might have gotten a lot more mileage out of it if the administration had said it was just the same old crap,” said Sonnenfeldt. “Instead, the President said, ‘Thanks a lot, we’ll have to look at it.’ ”

Some Republicans are pressing Reagan to schedule the next summit not in June—as he proposed to Gorbachev in the parking lot of Geneva’s International Press Centre—but in September, as a way of improving the campaigns of 22 Republican Senators fighting to retain their seats in the elections two months later. Indeed, last week the President tried to use the summit to persuade many of them to support the hard demands he will make in a separate detailed message following his state of the union address. Most explosive of all is a request for $100 million in military and other aid for the contras. But, said Maryland Democrat Michael Barnes “this would be a particularly bad time for the United States to increase the level of conflict in Central America.”

In the budget for the 1987 fiscal year that he will present to Congress in early February, Reagan will call for a three-per-cent increase in military spending. But he proposes to make the $60 billion in spending cuts needed to conform to the Gramm-Rudman Act through a series of measures that would either anger voters—by eliminating support payments to the poor—or scrap government services and assets that Congress has previously refused to let go. Speaker O’Neill last week denounced the budget as “nonsensical, crazy.”

Many congressmen of all parties predict another stalemate this year as they become increasingly aware of the devastation the Gramm-Rudman Act could cause. Indeed, during a Senate budget committee hearing officials predicted that it could lead to a 25-per-cent cutback in domestic programs and an 18-per-cent reduction for the Pentagon. Senate Democrat Frank Lautenberg of New Jersey declared that it could have a “terminal” impact on the ability of the government to carry out its functions. For his part, Reagan has consistently opposed the alternative that a growing chorus of Republicans is calling for—a tax increase. But other indirect “revenue enhancers” are under consideration. They include a national sales tax and an oil import tax.

In last week’s tense atmosphere on Capitol Hill, all sides were calling for a compromise. Indeed, even Reagan’s fiercest critics point out that his ability to forge a consensus has been the secret of his political longevity. On his Oval Office desk Reagan long kept a reminder that testifies both to that ability and to his perennial optimism. In crude red letters, the cream-colored plaque read, “Babe Ruth struck out 1,330 times.” 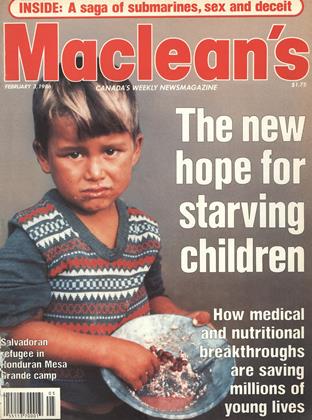