A budget for the boardrooms Peter C. Newman March 10 1986

Apart from its revolutionary notion of granting civil servants salary increases based strictly on merit, Michael Wilson’s second budget was significant mainly for the variety of messages it delivered.

To the business community, the Mulroney government seemed to be saying that now is the time for all good businessmen to come to the aid of the party. Wilson stressed that “the best way to create jobs is through private initiative” and invited companies to raise Tory fortunes by creating new jobs. Such a simplistic appeal betrays a fundamental misunderstanding of the Canadian business mentality. The average corporate executive is interested not in expanding capital facilities in a way that will make new jobs but in a way that will increase profits, and that often means high-tech innovations which sooner or later decrease employment. Still, this was the budget the boardrooms were praying for. As John Bulloch of the Canadian Federation of Independent Business so aptly put it, “This is not a budget to like but a budget to be thankful for.”

The Canadian economy remains in a delicate state of suspended animation. The difference between real prosperity which would significantly lower unemployment and the current drift does not depend on tax changes or federal spending cuts—or even higher consumer expenditures. Only a massive renaissance of capital investment will do the trick. What is really wrong with this budget is not so much what’s in it but the fact that it contains no creative incentives to increase the capital investment sector. The onus is heavily on Michael Wilson and his officials to give business a good reason for expanding factories and other production facilities instead of using profits to pay back loans and pay out dividends.

To the international money traders, the budget tried to send a tough message: if they attempted to push the Canadian dollar into another sickening free fall, Ottawa would fight back. The tactic didn’t work. Opposition Leader John Turner was voicing it as a criticism, but he was dead right when he commented that “the international money markets dictated this budget.” Now, if they would only crawl back into their trading pits, we would mercifully be spared the TV images of offshore gnomes telling us how to run our country.

To union leaders, the budget finally drove home the point that this is truly a Conservative government. Populism pays off at the polls but it doesn’t cover the bills.

To bureaucrats, Wilson put forth a carefully balanced warning: he will not give in to the “gore on the floor” mass firing demanded by economist Carl Beigie of Dominion Securities Pitfield Ltd., but he served notice that the glo-

ry (spending) days are over. It was not so much the $670-million net reduction this year, but the two-per-cent cap on spending into the 1990s that has put the civil service on tenterhooks. The days of the joke that civil servants wink by opening one eye are over. From now on, they will have to perform or get out.

To taxpayers, the news is short and not at all sweet: higher taxes on everything that moves and much that doesn’t. But there was an intriguing

fillip in Wilson’s brief reference to “not dismantling social programs” while “directing more resources to those most in need.” Could this be the first hint that the Mulroney crew has begun to take seriously not just free trade with the United States but the Macdonald Commission’s other major recommendations—the consolidation of social spending into a guaranteed annual income scheme?

For political junkies, the budget opened up some lively speculation on the Mulroney style. From the beginning, the Conservatives appeared determined to avoid Pierre Trudeau’s epic error of alienating so many special-interest groups that he eventually lost his power base. Since taking office, Mulroney seemed to be following the tack that by buying off enough particular interests—with promises and occasionally with action—the general interest would somehow take care of itself. That approach to governing allowed the Prime Minister to act as a broker among special-interest groups in the hope that his reach would encompass enough of a constituency to renew his mandate. But this budget disrupted that technique in mid-stride; it has hit nearly everybody. Could it be that Mulroney is finally beginning to govern for real?

To most of us, the budget left a lot of unanswered questions. On a political level, in both his budgets Michael Wilson has committed the government to some fairly stiff tax increases and cost cutting, not just in the immediate future but well into 1991—which takes him well past the end of the current mandate. How will he be able to remain comfortable in a government bound by the long-standing practice (probably maintained by necessity) of tabling a pre-election budget that will have to reverse or at least considerably soften most of his current directives?

The budget as a whole was probably the most enlightened accounting of the nation’s economic affairs possible under the circumstances. What it lacked was any concrete vision of the future, any policies to build a dream on. The government is still searching for glimmerings of the direction it should follow if it is to leave behind any permanent legacy beyond the fact of simply having been in power.

But that is for the future. For now, Brian Mulroney is probably just hoping that the budget debate will finally quench the stench of tuna. 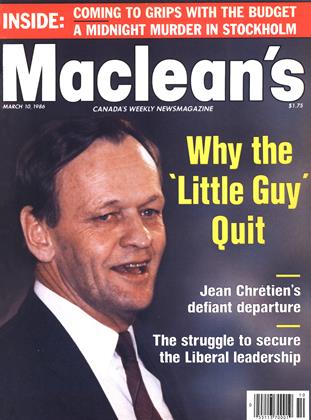