Bathed in light streaming through the lofty skylight of the marble Salle des Congrés in the Château Versailles, the leaders or representatives of 41 governments who gathered for a historic Paris summit last week were a study in diversity. Prime Minister Brian Mulroney sat between French President François Mitterrand and Senegal’s president,

Abdou Diouf. Behind them Zaire President Mobutu Sese Seko, wearing a traditional leopard-skin cap, shared the raised podium with other African leaders clad in ceremonial dress. Back in the fourth row of seats Quebec Premier Robert Bourassa, surrounded by other delegates from four continents, chatted quietly with Lebanon’s President Amin Gemayel. And Mitterrand seemed to be fully aware of the diverse nature of the meeting when he opened the inaugural summit of states that use French as a first or second language. Said the host leader: “We all have our own difficulties, and the timetables and perspectives

are different for each one of us.”

Still, despite the varied objectives expressed by rich and poor nations and a well-publicized disagreement between Mulroney and Bourassa, there was almost as much harmony as there was division at the three-day meeting, the result of 20 years of debate and diplomacy. Delegates agreed on 28 items of co-operation dealing with economic, political and cultural issues

facing the far-flung francophone community. A Canadian-sponsored declaration denouncing South Africa’s apartheid policies, although less forceful than one approved last October by the Commonwealth in the Bahamas, was unanimously endorsed. And a Canadian background paper formed the basis for a resolution calling for better ties between indebted nations and the international financial institutions, as well as a recognition of the need for stable commodity and agricultural prices. As well, the delegates took steps to promote the use of French in computer programs and satellite communications. Mulroney said

that he felt “great satisfaction and deep pride” at the success of the summit. For his part, Mitterrand declared: “La Francophonie is waking up from a slumber that has lasted too long. Its renaissance is here.”

But some representatives of African and other developing nations expressed reservations. They said that the industrialized countries dominated debates and that no real progress was

made on their mounting debt problems. Even Leopold Senghor, the former president of Senegal who first promoted the idea of a summit in 1962, said, “There is no cultural life without political and economic life.” African leaders also said that the final resolution on South Africa—which stopped short of a call for economic sanctions—did not go far enough. Mulroney, who had insisted that South Africa be on the agenda, said that the resolution—demanding the repeal of apartheid, freedom for political prisoners and negotiations with leaders of South African blacks—was “a minimum common statement that every-

A more sweeping international initiative was proposed by Bourassa—an intervention that renewed Canadian tensions over the proper constitutional role of the province in international affairs. At the end of the first day of proceedings Bourassa took the floor to propose measures—first put forward two years ago by France’s finance minister at the time, Jacques Delors—to redistribute Europe’s massive food surpluses to the Third World. Bourassa’s later recounting of his initiative to reporters outside the closed meeting clearly angered Mulroney. Ottawa and Quebec had signed an agreement last fall—ending a 15-year stalemate over Quebec’s participation in the summit— which allowed Quebec and New Brunswick a full voice on cultural and development matters but stipulated that the provinces could speak on international affairs only with the permission of the federal government. Declared Bourassa, who stressed that he had not told Mulroney what he intended to say: “If they call on Quebec to play an international role, I must participate in a significant way.”

Mulroney’s reply was short and to the point. “Do it to me once,” he said, “blindside me once, and you’ve got a problem the next time we meet.” Sources within the Quebec delegation told Maclean's that they considered the incident a test of how the 1985 federal-provincial agreement would work in practice. But even the Paris newspaper Le Figaro questioned the appropriateness of Bourassa’s recommendation. Asked the newspaper’s summit reporter: “Was it really in Quebec’s jurisdiction to make such a proposal?”

As a result, Ottawa and Quebec took action to avoid a similar contretemps at the second francophone summit, to be held in Quebec City in the fall of 1987 or the spring of 1988. A Canadian federal official will preside over the organizing committee, aided by two vice-presidents, one from Quebec and the other from France. Ottawa will pay 50 per cent of the costs, Quebec 45 per cent and New Brunswick five per cent. At the Quebec City meeting Mulroney will be the chairman, presiding over the first part of the summit. Then he will ask the conference to allow Bourassa to preside over the second half. Summit officials last week said they were reassured that the Quebec City meeting would not become preoccupied with federal-provincial infighting. With all the other hard economic and political difficulties facing the scattered club of French-speaking nations, that at least seemed like one small step forward. 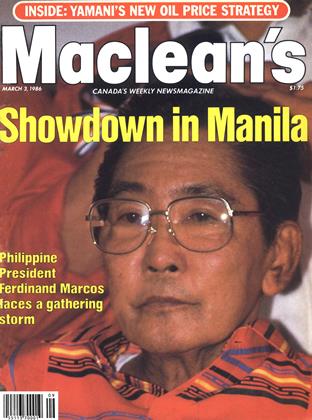