The memory of first love has a potent magic—the theme of Violets are Blue. Back in the 1960s, when Gussie Sawyer (Sissy Spacek) and Henry Squires (Kevin Kline) were teenagers in the small town of Ocean City, Md., they fell in love. But Gussie left town to become a famous, globe-trotting photojournalist while Henry stayed behind and reluctantly accepted marriage and a job as editor of the weekly newspaper. When Gussie returns home on vacation and sees Henry again, love, like an unlikely bolt of lightning, strikes twice in the same place. Then, the two uncover a plan by local developers to kill a herd of wild horses in order to obtain the land on a nearby island—and they begin entertaining visions of themselves as an intrepid journalistic team as well.

Attractive and successful as Gussie is, she complains that there is no romance in her life. Meanwhile, Henry worries about his responsibilities both to his wife, Ruth (Bonnie Bedelía), and his teenage son. Director Jack Fisk (Raggedy Man), Spacek’s husband, directs in a leisurely—at times even snail-paced—style, and it is left to the stars to carry the film. Spacek struggles to give depth to a weightless role, but Kline is relaxed and natural, with an appropriately concerned expression on his face, as the unfaithful husband. Together they manage to portray the

clumsiness of renewed intimacy. Still, while it attempts to evoke the lyricism of two crusaders in love, Violets are Blue amounts to little more than a nostalgic look at a routine romance.

A sparkling romantic comedy with an unlikely setting—the New York Police Department— Off Beat is a blend of innocent charm and sweet lunacy. Librarian Joe Gower (Judge Reinhold) owes his police friend, Abe Washington (Cleavant Derricks), a favor. When Abe is picked by his precinct to perform in the annual police benefit show, Joe agrees to masquerade in his place. As some of New York’s finest grudgingly—and hilariously—prepare for the benefit by taking lessons from ballet master August (Jacques d’Amboise), Joe meets policewoman Rachel Wareham (Meg Tilly). They fall in love, but Joe, stranded in his own deceit, cannot reveal who he really is. The resulting complications are resolved only in the bank robbery climax.

Violence underlies the story, but the film-makers have used it for comic effect. Mixing romance with the dark subtext of urban crime, Off Beat casts a baleful, satiric eye on America’s gun culture. Reinhold and Tilly are pleasant performers, but the film’s stars are its supporting cast: Austin Pendelton as an assertive gun salesman, Harvey Keitel as an inept robber and Penn

Jillette as Joe’s gun-crazy best friend. They contribute delightfully to a film that, rather than carrying a gun, carries charm in its holster instead.

Parting Glances, a low-budget film written and directed by Bill Sherwood, is a witty and touching portrait of homosexual life in New York City. The film, covering a 24-hour period, focuses on the extroverted Michael (Richard Ganoung) as he prepares to say goodbye to his quieter lover, Robert (John Bolger), who will shortly leave to work in Africa with a service agency. Each is tense about the impending separation. Meanwhile, Michael is also saying a slow goodbye to his best friend, Nick (Steve Buscemi), a successful rock musician who has contracted Acquired Immune Deficiency Syndrome (AIDS). Despite its serious subject matter, Parting Glances celebrates life rather than sentimentalizing it. As the film follows Michael and Robert to dinner, a farewell party in a loft and then finally to the airport, Sherwood’s eloquent message is that both love and life are to be savored while they last—that, above all, the moment matters. In Parting Glances, each moment is infused with that vitality. 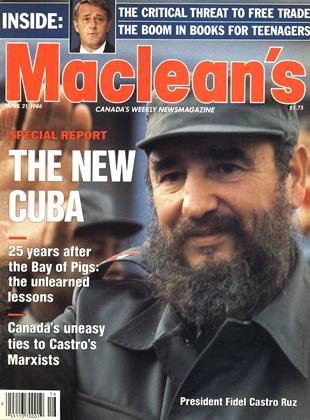