Winnifred Salter, a 57-yearold draftsman, says that she used to think that she was in good health—apart from periodic attacks of neck, back and shoulder pain which she dismissed as the inevitable discomforts of aging. But 18 months ago Salter volunteered for a Toronto hospital research program that needed healthy subjects in order to study the effects of exercise on bone structure. As a result, she quickly learned that her aches and pains had a specific cause: along with approximately 20 million other victims in North America—including one of every four women over the age of 60— she has osteoporosis, a metabolic disease which causes bones to become weak and brittle and can lead to serious fractures—especially of the vertebrae, hip and wrist. Said Salter: “I might have been a little suspicious. I do have a curve in my spine which is developing into a bit of a hump. But as most people do, I assumed that these things just come with growing old.”

Chronic: Her analysis is partially correct.

Experts estimate that at least 250,000 Canadian women, most of them past 50 (the average age of menopause), suffer from osteoporosis. Its characteristic symptoms — chronic back pain and the distinctive curve known as “dowager’s hump”—occur when bone loss causes the vertebrae to collapse in a series of small fractures. Men can also develop the disease, but among older women osteoporosis is a serious health problem which strikes more frequently than heart attacks, strokes, diabetes, rheumatoid arthritis or breast cancer. And one in five women who suffer osteoporosis-related hip fractures dies of complications from her in-

juries; an additional 20 per cent are permanently crippled.

The toll that osteoporosis exacts has spurred researchers to find a cure for the disease, using drugs that will stimulate depleted bones to regain their normal density. And as members of the huge postwar baby boom generation enter middle age, the prevention or cure of osteoporosis will become an increasingly urgent concern. Meanwhile, researchers around the worldincluding Canadian scientists in such centres as Toronto, Vancouver and London, Ont.—have reported some encouraging findings. But the researchers acknowledge that they may be years away from finding a cure for the disease. At the same time, other investigators are seeking methods of preventing osteoporosis and controlling its progress. In pursuit of those goals, recent studies have shown that although all men and women suffer some bone loss as they grow older physical inactivity can also produce a gradual decrease in bone mass. And although scientists who have linked bone loss in postmenopausal women to decreased production of female sex hormones can forestall or slow down that decline through the administration of estrogen supplements, the therapy increases the risk of cancer.

Despite those advances, osteoporosis remains a mysterious and baffling disease. For one thing, researchers still do not know if its victims suffer more bone loss in old age than their unaffected peers or if they have always had less than normal. They also do not know why the disease is more prevalent in North America than in many parts of Europe or why in the Bantu tribes of southern Africa, which have a low-calcium diet,

there are few victims of osteoporosis. According to Toronto physician Joan Harrison, such statistical variations indicate that climate, genetic background, nutrition and environmental pollution contain important clues in the search for preventive therapies— and a cure.

Windfall: Indeed, the growing interest in osteoporosis prevention has provided an unexpected windfall for producers of dietary supplements and dairy products. An influential panel of U.S. health experts met in Bethesda, Md., two years ago and reported that calcium, as well as the female hormone estrogen, are the “mainstays of prevention and management of osteoporosis.” U.S. manufacturers of calcium supplements recorded sales of $180 million last year—a 700-per-cent increase since 1980. And many doctors and nutritionists routinely urge women of all ages to include such foods as milk, broccoli, yogurt and tofu in their diets to ensure that they are getting at least 800 mg of calcium each day—an amount they can obtain simply by drinking three glasses of milk.

tain. Said Dr. Roger Sutton, a Vancouver specialist in calcium metabolism: “A lot of what is accepted or presented as proved may not be true at all. A case in point is the claim that calcium supplements prevent osteoporosis.” And as manufacturers prepare to cater to the growing concern over osteoporosis by enriching such products as cereals, milk and even soft drinks with calcium, Sutton added that individuals taking far more than 800 mg per day “run a slightly increased risk of getting kidney stones.”

medicine firm Norcliff Thayer Inc. of Tarrytown, N.Y., overhauled a $10-million advertising campaign last year to remind consumers that Turns—the company’s antacid tablets—were rich in calcium carbonate. But researchers still do not know how calcium, the most common metallic element in the human body, influences bone mass. They know that crystals of calcium phosphate give bones their strength and that calcium is essential to nerve impulse transmission, muscle contractions and the chemical activity of all body cells. They also know that if the

supply of calcium in the blood falls below a certain level, the body extracts calcium phosphate from the bones. But efforts to reverse the condition through increased calcium intake alone have not been successful. Declared Dr. Harrison, director of Toronto’s Bone and Mineral Group: “Osteoporosis is more complex than calcium deficiency. It is a problem of too little bone and bone that is not strong enough.” Harrison’s 20member team is conducting one of the most promising of several current Canadian osteoporosis studies and, with medical researchers drawn from six city hospitals and the University of Toronto, it is testing a therapeutic regimen specifically designed to restore lost bone. And since 1983, members have conducted exercise programs featuring jog-

ging and weight training to check the progress of the disease.

In one program the medical team is working with 160 patients between the ages of 45 and 80, who are given 20 mg of sodium fluoride in tablet form two or three times each day as well as one daily gram of elemental calcium. Harrison says that she has been encouraged by preliminary results which indicate that after four years the treatment had restored half the lost bone mass in many patients. But she adds that it is still too early to gauge the usefulness of this treatment. Said Harrison: “The message is that it is exciting, but there have been some questions about its routine use and about bone that doesn’t look quite normal.”

Dramatic: Winnifred Salter is not receiving sodium fluoride as part of her treatment. Instead, she takes part in an exercise program three times each week under the supervision of Dr. Raphael Chow, a specialist in rehabilitative medicine at Toronto’s Queen Elizabeth Hospital. Before Chow prescribes such exercises as light weighttraining and brisk walking or even jogging, researchers measure the bone density of new patients and use a treadmill to determine their overall fitness. Besides exercises designed to strengthen muscles and retard bone loss, Chow sometimes recommends posture retraining to prevent a dowager’s hump from worsening. His findings show that otherwise healthy postmenopausal women who do aerobic exercises without lifting weights show little change in bone mass. But those who do both often register a dramatic bone mass increase.

And with the gains they have made through treatment, Salter and the 20 other women in her therapy group are facing the future with renewed confidence. Said Salter: “I don’t suppose that my spine will ever straighten up completely, but the exercises alone make me feel much better.” Declared Elizabeth Mason, executive director of the Osteoporosis Society of Canada: “We still don’t know the cause. But we believe that calcium helps as prevention and we know that good, consistent exercise right through life keeps bone density up. We are in a better position to help.” 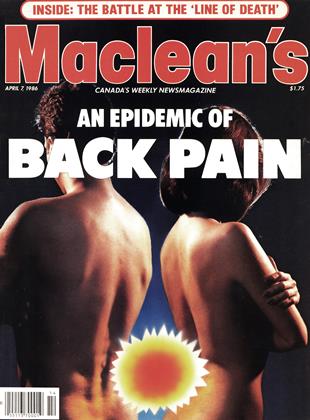