A BUSINESS CONNECTION LINDA CAHILL May 26 1986

Good-looking, tough and politically well-connected, auto-parts magnate Frank Stronach is the millionaire role model for thousands of Canada’s aspiring entrepreneurs. He arrived in Montreal from Austria in 1954, a 22-year-old tool-anddie maker with $200 in his wallet. Last year Stronach earned $1.85 million—as much as hockey star Wayne Gretzky—making him the country’s top-paid executive.

His company, Markham, Ont.based Magna International Inc., is the largest Canadian autoparts maker. Admired as a nononsense businessman and criticized by the labor movement for his uncompromising antiunion stance, Stronach has also learned how to make full use of Canada’s rich system of industrial grants. But last week he found himself embroiled in the Sinclair Stevens resignation, a political controversy that threatened to cloud Magna’s glowing reputation.

Scrutiny: While Stevens was resigning his cabinet post in the wake of allegations that he had violated the government’s conflict-of-interest guidelines, Stronach’s own relationship with the MP came under increasing scrutiny. Last year Stronach directed Stevens’ wife, Noreen—who was seeking a loan for a family firm, Cardiff Investments Ltd.—to Anton Czapka, a longtime associate and shareholder of Magna who is now a vice-president of Multimatic Inc., a Magna subsidiary. At about the same time, Magna was negotiating with Stevens’ department of regional industrial expansion for a $64.2-million grant to help the company build two factories in Cape Breton. That grant was more than double the total amount of federal aid that Magna had received in 11 grants between 1972 and 1984—the year the Conservatives won the federal election.

Last week Stronach firmly defended his personal relationship with Noreen Stevens. He said that she asked him for advice on how to obtain a business

loan to assist troubled Cardiff, a subsidiary of York Centre Corp., the Stevens’ principal holding company. Said Stronach: “She came to me as a friend. In the future I would do the same thing.” And some businessmen said that they understood the Magna chairman’s action. Said Michael Sifton,

president of Toronto-based Armadale Co Ltd.: “Say we get a grant and somebody I am dealing with on a daily basis comes to me for something. I’d have no qualms about seeing them.” He added, “It’s natural and human for people to go to the people they know.”

Bidding: Earlier this year, during the first stages of the Tory government’s program to privatize Crownowned companies, Magna submitted a bid for federally owned aircraft maker Canadair Ltd. The bid was sent directly to Stevens’ Industry office—instead of to the Canada Development Invest-

ment Corp. (CDIC), the Crown corporation that is selling Canadair.

Magna has a long-established relationship with the federal industry department-receiving millions of dollars in grants and interest-free loans. Former Liberal industry, trade and commerce minister Edward Lumley, now chairman of Noranda Manufacturing Inc. and a consultant to the auto-parts industry, told Maclean’s last week that he sought out Magna to participate in grant programs because the company was successful at creating jobs. The company received its first grant, for $245,000, in 1972 during the Pierre Trudeau administration. Maclean’s has learned that between 1972 and 1984 Magna obtained 11 grants and loans totalling about $29 million.

Then, in August, 1984, a week before Brian Mulroney’s Conservatives swept into power, Magna and Lumley signed a new agreement covering grants to the company. Under that arrangement, which is still in effect, Magna would receive a dollar from the government for every $9 it invested in new projects— up to a maximum of $50 million in grants and loans.

Match: Magna has obtained a far more generous arrangement from the Conservatives. In June, 1985, Magna signed another agreement—with Sinclair Stevens as industry minister—to set up autoparts plants in Cape Breton. After 10 months of bargaining and study, last April Stevens finally announced the details of the deal. Magna planned to build two parts factories that would cost $64.2 million and employ a total of 270 people. Company officials said that the government should commit a large amount of money because the Cape Breton venture was considered a high risk. As a result, the government matched Magna’s investment dollar for dollar.

Industry insiders had also considered Magna to be the likely successful bidder for Canadair. And in January, Prime Minister Mulroney appointed Stronach to the board of the CDIC, the federal holding company that owns Canadair and is in charge of selling it.

Stronach has spent years cultivating influential members of both the Liberal and Conservative parties. He has said in the past that he belongs to nei-

head-table guest at Trudeau’s major farewell appearance in Toronto in December, 1983. Said the president of a major Canadian auto-parts maker, who asked not to be named: “He keeps a full-time lobbyist in Ottawa.”

Loan: Earlier this year Mills played a prominent role at Opportunities Canada, an international business conference held in Toronto. The conference, organized by Mills, was designed to encourage foreign investment in Canada as well as joint ventures between Canadian and foreign firms—a business arrangement that Magna has used with great success. Although Opportunities Canada was a private sector initiative,

terest-free loan toward the estimated $1.2-million cost of staging the event. About 300 investors from 27 countries attended the conference, and Mulroney gave the keynote address. But one Liberal insider said: “It was a horrible conference. They had to pay people to come.”

Control: Last week Stronach moved swiftly to limit any damage from the Stevens resignation. Known for his

openness with the press, he readily agreed to interviews—but there were stringent conditions. Among them: that the interview be published in a question-and-answer format. When contacted by Maclean's, Stronach also requested that the journalist sign an agreement allowing him to read and approve the edited version of the story before it was used/ Maclean's rejected the terms. Explaining his demands, Stronach told Maclean's: “We got stabbed, bruised and very gun shy.”

Stronach has many defenders who praise his successes. Lumley describes Magna as a

2 pany in Canada were like g Magna, we would be first x everywhere in the

world.” Declared Gerald Greenwald, chairman of Detroit-based Chrysler Corp.: “Magna is as good as any autoparts manufacturer in the world.”

With 95 factories and sales of $690.4 million in 1985, Magna has close to 10,000 employees turning out 4,000 different car parts—from brake-pedal assemblies to windshield wiper motors. Stronach espouses a generous, people-oriented corporate philosophy

that emphasizes benefits such as profit sharing, day care and sports facilities for employees. He is also a strong opponent of labor unions. It is company policy to limit the number of employees in its plants to approximately 100—a practice that Magna says encourages a family atmosphere and that spokesmen for the United Automobile Workers of Canada claim discourages organizing. Said Buzz Hargrove, administrative assistant to UAW of Canada director Robert White: “We’re now working on a major organization drive. We hope to get at the eye of the octopus.”

Publicity: In the weeks ahead, when the inquiry into Stevens’ conduct begins, the relations between Stronach and the former industry minister and his wife, Noreen, will likely come under further scrutiny. It is the kind of publicity that the curly haired millionaire is not used to. 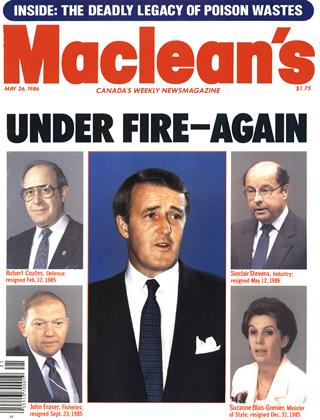