W e're living through one of the greatest periods of oppor tunity we've ever experi enced-but we won't know it until we've passed through and are looking back on what's been happening." That verdict, from James Gray, executive vice-president of Canadian Hunter Ex ploration Ltd. and one of the Calgary Oil Patch's few resident optimists, is far from a prevailing view, but it is Wiflfllflgafew converts.

“I may be hypnotizing myself,” he told me recently, “because my job is to raise money for my company, and I’ve been to Europe, Australia, twice to the United States and all over Canada, trying to convince people that this is the moment of greatest opportunity they’ll ever see. But there are a growing number of what I call ‘contrarians’—industrialists in Europe, shipping and automobile executives, top-notch people in the United States and elsewhere who are beginning to agree with me. They know that the best decisions are those that are difficult to make. The ones that are easy to make, everybody makes them—but there isn’t much of an upside. The time to buy oil and natural gas stocks is when the industry is flat on its back.”

Gray sounds more confident than he feels about energy’s short-term prospects, but he has no doubts at all about the distant future. “The near term may be opaque and the medium term cloudy, but the long term is highly predictable. Canada is already the third-largest natural gas and ninth-largest oil producer in the world. Yet, we have only started. Our sediments are, relatively speaking, unexplored. We have considerable untapped potential across the Prairies into British Columbia, sweeping up the MacKenzie Valley into the Beaufort Sea, through the high Arctic Islands and down along the Eastern seaboard and Atlantic coast.”

He is advocating the high-risk notion that investors should place themselves in a position to ride the upward market tide he predicts will follow the current period of bargain-basement oil prices. “I know there’s lots of disappointment with what’s happening right now,” he stresses, “but damn it, we mustn’t allow ourselves to be suffocated by the events of the moment. That’s a short-term phenomenon, and we must maintain a longer perspective.”

Gray and the few other Oil Patch insiders who share his views brandish statistics to show that, on the basis of records between 1975 and 1983, the prospect of turning an exploratory well into a discovery is 2.5 times as good in Canada as in the United States. (Over that period, 56 out of every 100 wells drilled became producers, compared with 22 out of 100 south of the border.)

At the moment, the Americans have

only 729 rigs out in the field, the lowest number in 40 years, and the Canadian situation isn’t much better. The Independent Petroleum Association of Canada has estimated that reductions in exploration spending now exceed $1.5 billion, and there have been forecasts that as many as 15,000 jobs could be lost in Alberta because of the OPECengineered price drop.

Gray believes that the Saudis have already succeeded in “scaring the nervous nellies” out of the business. Other ex-

He estimates that probably in two and certainly in five years the United States, which is the world’s largest consumer, will be short of domestic natural gas supplies. Gray predicts that our current exports of gas across the border (900 billion cubic feet in 1985) will be up to 1.7 trillion cubic feet by 1990, capturing a full 10 per cent share of the American market.

Unlike other Oil Patchers such as former Dome Petroleum Ltd. president Bill Richards, who is busy concocting complicated formulas for government assistance, Gray wants Ottawa to stay out of the industry. It was Gray and his partner John Masters who led the fight against Pierre Trudeau’s National Energy Program, and they want no more Ottawa intervention in their affairs.

What really upsets both Canadian Hunter executives is that, because of the oil price crunch, economic power has shifted from the West back to Ontario. Gray estimates that during the 1970s and early 1980s, Alberta subsidized Eastern Canada by at least $60 billion, because oil was sold domestically at cut-rate prices compared with some of the world rates.

“We’re reminding these folks,” he says with more than a hint of belligerence in his voice, “that, lookit, you wanted deregulation, you got it, and so energy prices are down. But when they move up again, as they inevitably will, we don’t want re-regulation again. That would be enough to drive me into separatism. If I even hear the whisper of re-regulation, there’s going to be an explosion out here!” 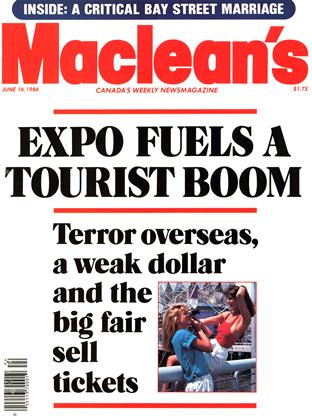