Premier William Bennett looked pleased as he strode into a hastily convened Vancouver news conference. Carrying a cup of coffee in his left hand, he traded jokes with reporters, then took a seat at the large oak table. Looking back over his shoulder at a wall clock, he noted that it was 9:58 a.m., precisely two minutes before the session was scheduled to begin. “Like the airlines say,” he quipped, “never start early.” At the appointed time, however, Bennett swiftly became businesslike. As Audrey, his wife of 31 years, looked on, Bennett, 54, announced that after a decade in power he was resigning as premier and lead-

er of the Social Credit Party to make way for a summer leadership convention. Said the premier: “The time to leave politics is when things are good. Right now, the times are good.”

Expo 86 had opened to wide acclaim, and Bennett could take credit for Vancouver’s $800-million Advanced Light Rapid Transit system and the only domed stadium in Canada. As well, in May Bennett proudly opened the $250million Coquihalla highway that shortens the drive from the Interior to the coast. But the economy has soured, more bitter confrontations loom with organized labor and Bennett has been embarrassed by four trusted ministers who cast a poor light on the morality

of the government. In addition, private surveys indicated that Bennett could not capitalize on the lustre of the fair if he called a fall election. As Maclean's Senior Contributing Editor Peter C. Newman reported from Victoria: “The latest poll, taken only 48 hours before he decided to resign, indicated that despite Expo’s universal acceptance very little of the political credit was accruing to him or his government. In a private poll taken six weeks ago, Bennett’s party was running 19 points behind the New Democrats. By last week the gap had narrowed to a still-significant nine points, but there were strong indications that it would widen again. There seemed to be no way Bennett could exploit the fair for a fourth term in office.”

The premier said that he was not leaving because he feared defeat at the polls. Said Bennett: “If an election were called today, I’d win.” But he acknowledged that his father, W.A.C. Bennett, had erred in “having stayed as premier and leader too long.” Although a new Socred leader and premier will not have to hold an election for two years, Bennett has not left his party with an obvious successor. As a result, the leadership contest could produce a crowded field.

The first person who indicated an interest in the job was former education minister William Vander Zalm, a wealthy gardener from Surrey. Another possible candidate is Grace McCarthy, the provincial secretary who was instrumental in securing the Expo for Vancouver. Early leadership speculation also embraced former Liberal MP and Vancouver Mayor Art Phillips and Expo president and chairman Jim Pattison, who may face strong pressure to run despite his stated determination to return to the private sector (page 45).

For last week, however, Bennett’s surprise decision was the dominant subject in the province. In one swift stroke, he ended a family dynasty that had ruled in Victoria for all but three years since 1952—when W.A.C. Bennett, was elected as the first Social Credit premier. Bennett served as premier for 20 years, until David Barrett’s NDP defeated the Socreds in the 1972 election. One year later Bennett stepped down and made way for his son’s election as Socred leader. And in the 1975 election, William Bennett returned the Socreds to power. Said possible Social Credit candidate Peter Brown, president of Vancouver-based Canarim Investment Corp., a venture capital firm: “It’s hard for me to imagine B.C. without a Bennett.”

The sudden and unexpected announcement led to widespread expressions of disbelief. Said Pattison: “I thought it was some kind of April

Fool’s joke.” Attorney General Brian Smith, another possible leadership candidate, said that he had played tennis with the premier the day before, but that he had not received any hint of the premier’s plan. NDP Leader Robert Skelly praised Bennett as “a tough politician who led our province through difficult years.” But Skelly added, “The premier should have called an election at this time, rather than announced his resignation.”

The timing of the resignation heightened the mystery surrounding a man who has been a constant enigma to the people who elected him. His decision was announced after months of soul-searching, including a pensive

Victoria Day weekend at his home in Kelowna, the town where he was raised. Audrey Bennett knew of the plan from the beginning. On May 19 Bennett told his brother R. J. (Russell James), a millionaire horseowner who still runs the family chain, Bennett Stores Ltd., in Kelowna.

Bennett returned to Victoria on May 20 and informed Norman Spector, his deputy minister. The next day he told his newly appointed principal secretary, Jerry Lampert, former national director of the federal Conservatives. Then at 4:45 p.m. on May 21 Bennett flew to Vancouver with two aides. He checked in at the Wedgewood Hotel and ordered room service. Early that evening, Lampert phoned party president Hope Wotherspoon in Victoria. She and executive director David Marley were asked to meet Bennett in Vancouver for breakfast on May 22. Said Wotherspoon: “I did not think anything of it. I’m used to having meetings with him like that.”

Wotherspoon caught a midnight plane to Vancouver. At 7:30 a.m. she and Marley walked into the dining room of the Wedgewood where she found Bennett sitting at a window table beside a potted plant. He had already had one meeting with aides and he was having a breakfast of toast and coffee. In a relaxed manner, Bennett declared his intention to step down.

The manner of his leaving was true to the premier’s style. Said Herb Capozzi, a friend of Bennett’s since childhood: “He makes his mind up by himself. He does not have great groups of advisers.” Despite almost 13 years in the intimate political life of Victoria, Bennett lives in an apartment hotel

two blocks from the legislature where he usually eats lunch alone. His cronies are the sons of men who built his home town—The Kelowna Mafia. Still, Bennett has at times confided in—and sought advice from—former Alberta premier Peter Lougheed. In the early planning stages of Expo, Lougheed urged Bennett to press on even when it looked unlikely that he could obtain an agreement with the then federal Liberal government on cost-sharing.

Bennett first started making deals when he and R.J. took control of the family business, after their father became premier. They scrimped and saved, wheeled and dealt. They bought and developed real estate and expanded the hardware chain. At one point they even bought a tractor and grew tomatoes. When that failed they travelled around on a tractor cutting and stacking woodpiles for customers.

According to published reports, Bennett’s holdings now include a sawmill, a finance company and a $34-million

shopping, hotel and residential complex-all of which were put in a blind trust when he became premier. For all that, Bennett is not a big spender. Pat Annesley wrote in a Vancouver magazine of a time when Bennett broke his leg while skiing with R.J at Kelowna’s Big White resort and tried to get a refund on his lift ticket.

Bennett’s 11-year reign as premier has been marked by controversy and construction. On the one hand, he conceived and built seven major megaprojects worth $7.2 billion, including the northeast coal project. But in 1983 he slashed budgets for social services and cut the civil service by 25 per cent. Bennett’s 1983 restraint program led

to one of the most intense periods in the province’s turbulent history. NDP MP Ray Skelly, brother of the provincial New Democrat leader, said of Bennett: “He’s started one war too many. He’s alienated virtually everybody. His kind of direct attacks will not be forgotten quickly.”

More than anything, Bennett wanted to leave politics a winner, on his own terms, in his own time. In fact, he has robbed the NDP of their main target in the next election. When he returns to private life in the summer, he will leave a sharply divided province, one which has been both a beneficiary and a target of his stern rule. But he leaves with the conviction, as he said last week, that “the things I wanted to see completed are completed.” As Prime Minister Brian Mulroney observed, “One of the most important things in politics is to know when to leave.” 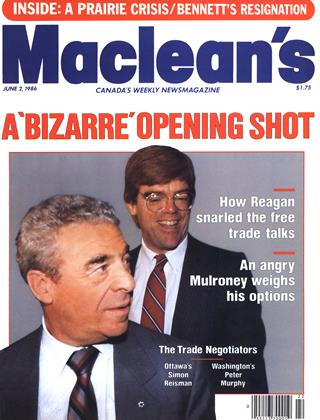