In one of the boldest foreign affairs initiatives in Canada’s history, Prime Minister John Diefenbaker persuaded the 1961 Commonwealth meeting in London to attack South Africa’s policy of apartheid by demanding that “racial equality” be made a principle of membership. South Africa, unwilling to abandon its system of racial segregation, withdrew from the Commonwealth, never to return. But Ottawa’s actions in the 25 years since Diefenbaker’s diplomatic coup have been largely symbolic.

Clark told the Commons that South Africa had rejected out-of-hand the conclusions of the Commonwealth-sponsored inquiry known as the Eminent Persons Group. The group’s report declared that Pieter W.

Botha’s National Party government was not willing to negotiate with the country’s black majority, and recommended strong “concerted action.”

Indeed, Clark said that the group’s findings demonstrated “no genuine intention on the part of the South African government to dismantle apartheid.” Among the measures against Pretoria that Clark announced: an end to Canadian government procurement of South African products; the banning of South African tourism advertising in Canada; the allocation of $2 million for training South African blacks and the removal of accreditation from four U.S.-based South African attachés with some duties in Canada. Joining 12 European nations, Ottawa ordered the Canadian Embassy in Pretoria closed for memorial services on Monday “to mark the aspirations of the majority of South Africans for a society based on freedom and equality and to share their hope for peace.”

In the past 25 years the international community has rarely credited Canada with bringing significant pressure to bear on South Africa. In 1978, following the 1976 massacre in Soweto

and the violent death in custody of black leader Steven Biko in 1977, External Affairs Minister Donald Jamieson devised a voluntary “code of conduct” for Canadian firms conducting business in South Africa that was designed to promote improved working conditions for blacks. It was a move that then-opposition leader Joe Clark applauded. Last September Clark, as

Still, Clark’s steps, however limited, were a signal to Britain’s Prime Minis-

ter Margaret Thatcher as well as to South Africa’s rulers. Among Commonwealth countries, Britain is the most influential power holding out against imposing wide economic sanctions. Britain’s reasons: it stands to lose as many as 120,000 jobs—in a country already beset by high unemployment—and $12 billion in investments in South Africa.

But there is a major risk Thatcher may have to live with: the fact that by failing to support international pressure, Britain could leave itself open to an assertion that it contributed to a “bloodbath” predicted by the Commonwealth group. At week’s end, Thatcher’s foreign secretary, Sir Geoffrey Howe, said it was “too early” to make a decision on sanctions. He said the British government was all but convinced that sanctions did not work, but added that it could adopt a new South African strategy depending on the outcome of a planned August Commonwealth summit. Meanwhile, in Harare, Zimbabwe’s daily Herald called for Britain to be expelled from the Commonwealth for its refusal to endorse economic sanctions and “its spiteful defiance of the sombre mood of the times.” For their part, Canadian businesses have already been quietly withdrawing from South Africa. In the past 10 months five of the 22 Canadian corporations known to be involved in South Africa have pulled out. Among them were such mining giants as Noranda and Alcan and the insurance company Reed StenI house. Direct Canadian investment has declined to about $100 million from a peak of $239 million in 1981. But their reasons for doing so were related to poor South African economic conditions, not the lot of the black minority. Said Bernard Ness, president of Canada Wire and Cable: “Everybody and his uncle were always calling us up asking why we were investing in South Africa. But I make my decisions for business reasons, period.” 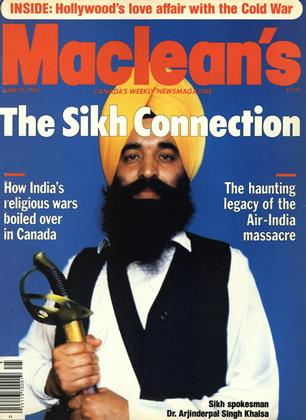