Eugene Pasap was only eight years old when government authorities decided his parents were not raising him properly and placed him in the care of foster parents. But they had little more success with the unruly youngster. Later, he went to Paul Dojack Youth Centre for juvenile boys in Regina and then to the Knowles School for Boys in Winnipeg. At age 16, he was convicted of assault. Then, convictions for breaking and entering, theft and more assault earned him two terms in the Saskatchewan Penitentiary at Prince Albert and a third at Stony Mountain Institution in Manitoba. Now 30, Eugene Pasap has spent almost half his life in custody and is harshly critical of the Canadian criminal justice system. But Pasap’s criticism is based on more than the time he has served. He is a Cree, and he says he knows that in conflicts with the law Indians are far more likely than whites to end up in prison. Of the 1,700 inmates in federal and provincial institutions in Saskatchewan, 54 per cent are either Métis or Indians, although only about 10 per cent of the province’s population is of native ancestry.

whites and Indians, the lot of Indians is worse. They are more likely to become repeat offenders. In Saskatchewan, where the fullest data on native inmates are available, Indians are more likely to be jailed for violating provincial statutes. Nationally, natives are more likely to have their paroles revoked even though they have committed no new offence. In a 1970 study of Indians in Toronto, sociologist Mark Nagler wrote: “Like many other immigrant groups, Indians recently arrived in the city are so confused by the conflict between the teachings of their elders and those of the white man that they tend to set aside the whole problem of morality as meaningless or unsolvable. This absence of generally accepted values among Indians leads to chaos.”

Chaos: Eugene Pasap says that his entire life was chaos until he stopped drinking 2Vè years ago. Now the father of three children, he is a counsellor at Regina Native Youth Community Services. Said Pasap: “What I would like to see is a system on the reserves where they could punish their own. The problems become worse when Indian people become a part of the justice system. It might be different if we could deal with our people.” But for Indians, the problems extend beyond arrest and trial. Said Pasap: “In the institutions, you actually see racism and are confronted by it. I got beat up, once by the guards, and another time the guards put other inmates onto some of us in Prince Albert.”

One expert who also underlines the result of racism in the system is James Warner, Regina-area director of the John Howard Society, a service organization for offenders and their families. Propping his feet on the desk in a hot, cluttered office, Warner said: “You put a white man and a native beside each other, same age, same crime and same judge—many times the native will get time and the white man will get a conditional discharge. Yes, I think the system is racist.” Warner’s colleague Dick Byrd, a John Howard caseworker who is a Métis, said that the disproportionate number of Indians in jail should not be blamed on white judges but on the reserves which incubated the alcoholism and violence that led to apparent inequities in the justice system. Added Byrd: “Reserves have no economic base and therefore all the talented people on reserves leave. There are no role models left. The only role model is to be the toughest guy on the reserve.”

Squads: Most municipal enforcement agencies have few special resources for dealing with native crime. But six police departments, in Vancouver, Edmonton, Calgary, Regina, Toronto and Ottawa, have responded by setting up special squads to keep migrants out of trouble once they arrive. Const. Brian Van De Wark belongs to the Calgary force’s five-member race relations unit, which meets regularly with representatives from the surrounding reserves and from the Calgary Indian

Friendship Centre. Burly, big-muscled and fair-haired, Van De Wark sat at a table on the third floor of the unit’s headquarters in northeast Calgary, chewing tobacco and sporting a tie clip fashioned from a miniature gold Indian shield, a gift of the Louis Bull Indian band at Hobbema, 70 km south of Edmonton. Said Van De Wark: “Alcoholism is an effect, not a root cause, of Indian problems. It is an effect of stress. If you had a bad education and couldn’t get a meaningful job because you had no skills, what have you got left? Indians often choose jail over paying an optional fine, even with time to pay, because their self-esteem is so low. Does jail

matter? Fm convinced a lot of native ex-inmates want to go back to jail because there they are out of trouble.” Drunkenness, theft and acts of violence get Indians into trouble, added Van De Wark, but so do cultural differences. He recalled incidents of Indians failing to keep appointments with lawyers or the police because their traditional notion of time was that, if the meeting was important, the other person would wait. As well,

said Van De Wark, “Indians value forgiveness, and cases often involve people who have forgiven everyone long before the case comes to trial—which is why they don’t honor subpoenas.”

Complaints: Indians across Canada have long complained of unequal treatment at the hands of police, but there is little hard evidence. However, The Canadian Journal of Criminology and Corrections published a study 12 years ago based on arrests and charges laid by Winnipeg city police. Although Winnipeg’s native population at that time was only three per cent of the total, natives were involved in 27 per cent of all male offences and 70 per cent of all female offences.

Patricia Desjarlais, 36, is a former president of the Regina Native Women’s Association and a life-skills instructor who tries to improve living conditions for native women. But she was once little more than a statistic. She told Maclean's that after she ran away from her Regina home and her alcoholic mother at age 15, she turned to prostitution because she could not hold a job and served two 30-day terms for vagrancy in the mid-1970s. One day last month she sat in a booth in a shopping mall restaurant, wearing a beige jumpsuit and eating soup and a salad, and said that she is still embittered by her experience with police and the courts. Said Desjarlais: “I don’t feel sorry for those girls out on the street. They are only trying to make a living. When you are backed up against the wall, you use your instincts.” Desperation is a circumstance familiar to James Trottier, a 36-year-old Métis from Edmonton, whose first encounter with the law occurred at the age of eight when he and some companions broke into a private club to steal whisky. Said Trottier: “My father was an alcoholic, a drunken tough-guy, and I just wanted to be the same thing.” Trottier drew his first jail term in 1965 and spent 11 of the succeeding 20 years behind bars for breaking and entering, fraud and assault. Last October he was paroled from the Saskatchewan Penitentiary at Prince Albert and says he has kept out of trouble ever since. He is now unemployed. Said Trottier: “You know, I used to refer to jail as home when I was out on a pass. It took me six or eight months after getting out to realize there is a difference between jail and home.”

Parole: There is also a significant difference between whites and Indians in the success rate of parole applications. National Parole Board figures in 1981 showed that 42 per cent of white inmates who applied for parole got it, but only 25 per cent of natives did. Even more disturbing was a 1982 report of the Correctional Service of Canada’s strategic planning committee. It found that more and more Indians were leaving the reserves for the cities and that the number of those most likely to get into trouble was growing. The implications, said the report, were that the ranks of unemployed Indians could double by the early 1990s, and the rates of crime and imprisonment among Indians will increase. For a people embittered by white man’s justice, it was hardly a hopeful forecast. 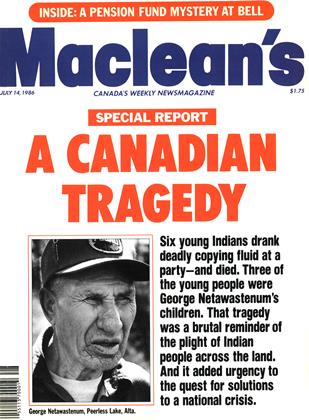