Action on the floor of Canada’s largest commodity exchange is swift and frantic as the market brokers shout out their bids and prices. In the two main trading pits of the Winnipeg Commodity Exchange, grain companies, farmers, speculators and traders buy and sell grain and oilseed crops daily in rapid-fire transactions worth just under $10 billion a year. The 98-year-old WCE, housed in a 32-storey building dominating Winnipeg’s famous Portageand-Main intersection, is the financial heart of the vital Canadian grain trade. Behind the chaos and the noise of trading, its successful operation has depended on one fundamental principle: that a trader is as good as his word. Said Clifford Swartz, the chairman of the exchange’s board of governors: “The industry must accept your contracts and commitments without question.” But during the past two months, allegations of illegal trading and falsification of records have been raised in two startling investigations.

Parts of the drama unfolded last May when two companies associated with the WCE declared bankruptcy. Then, an investigation by the exchange, a self-governing body, revealed that in their final

days the companies had been falsifying financial statements. Now, RCMP officers, after a separate year-long investigation, are examining evidence to determine whether charges will be laid against a former employee at a third company.

Early this month, WCE directors acted. They levied fines totalling $375,000 against the officers of the two bankrupt brokerage firms, Can Am Commodities Corp. and Duvell Grain Co. Ltd. As well, they expelled from the exchange the firm’s presidents, Brian Settee and Norman Duvell respectively, for supplying false financial information to the exchange. But many people who rely on the WCE say that they are still concerned about its ability to police itself.

Later this month, the exchange’s board of governors is scheduled to hear a complaint brought by XCan Grain Ltd. against one of the traders now under investigation by the RCMP. Declared

Murray Cormack, chief executive officer of Manitoba Pool Elevators and a board director of XCan Grain: “Members of the public that deal with the exchange need to feel that matters are being conducted in a business-like, ethical manner. The events of recent times don’t give them that assurance.”

after the Chernobyl nuclear disaster in the Ukraine on April 26. Fuelled by rumors of extensive damage to agriculture in the Soviet Union and other parts of Europe, prices moved up during unusually heavy trading on April 29 and 30. As a result, Can Am was forced to make large deposits with the WCE’s clearing house on both days in order to secure its orders. But on the evening of April 30, Settee informed exchange officials that his company would not open for

business the following day because he did not have enough cash to cover trading in what he expected would be another volatile day. Exchange officials immediately launched an investigation and

suspended from trading both Can Am and an associated company, Duvell Grain. On May 9, both firms declared bankruptcy—leaving debts of $500,000 to 59 unsecured creditors.

Since then, the WCE had uncovered a variety of financial irregularities in the books of the two companies. A Can Am balance sheet filed at the end of 1985 omitted a $130,000 debt to a farmer. In another case, an executive of Duvell Grain deposited and withdrew $80,000 within a space of three days, providing a misleading picture of the company’s financial status. The exchange levied a $100,000 fine against Settee; $250,000 against Duvell, who was both the vicepresident of Can Am and the president of Duvell Grain; and $25,000 against Duvell’s son Randy, the secretary-treasurer of both companies.

They were the largest fines in the history of the exchange. But the WCE’s image has also been tarnished by the yearlong RCMP investigation based on documents and files seized from a dozen companies operating at the exchange. Police say that it is too early to say whether charges will be laid. Still, information contained in their search warrants paints a sordid picture of some grain company employees and private brokers who may have been financing their personal ventures on the market with customers’ money.

Can Am and Duvell Grain are among the companies named in the RCMP investigation. But that inquiry has centred on a former employee of XCan Grain—one

of the country’s largest grain exporting companies and jointly owned by the three prairie wheat pools. The search warrants allege that between 1980 and 1985 Gustave Deslauriers, a senior XCan trader, who was fired in November, 1985, received nearly $500,000 in return for inside information on XCan’s trading. The warrants indicate that the leaked information allowed a company owned by Deslauriers and his brotherin-law, Wayne Gerald Carels, to enjoy what grain industry expert Walter Folliott described as “uncanny success” on the futures market.

Another search warrant detailed a series of questionable trades made on the market in the early 1980s. Investigators allege that, in one case, abnormal trading activity over an undetermined period of time resulted in the defrauding of United Grain Growers Ltd., a major Winnipeg company, of almost $100,000.

The WCE’s Swartz says that he is worried that publicity surrounding the police inquiry is hurting the image of the exchange, even though none of its officers or employees has been implicated. Still, Gerald Moore, general manager of United Grain Growers, declared that if there was illegal trading on the WCE for five years, “it will reflect quite badly on the administration of the exchange.” 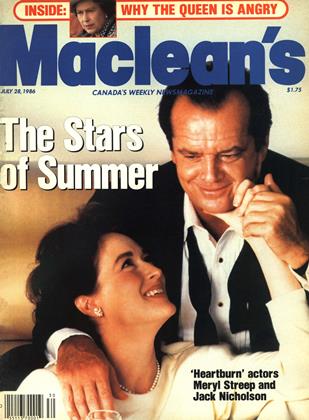