In a speech to constitutional experts at Mont Gabriel, Que., last May, Quebec’s Intergovernmental Affairs Minister Gil Rémillard unveiled his province’s five minimum requirements for signing the Canadian Constitution. Since then, Quebec’s Liberal Premier Robert Bourassa has repeatedly said that before proceeding further he needed an indication of the “political will” in the rest of Canada for bringing Quebec into the constitutional arrangement that Parti Québécois Premier René Lévesque refused to join in 1981. At last week’s premiers’ meeting in Edmonton, Bourassa finally got that signal. Host premier Don Getty emerged on Tuesday from Alberta’s Government House to announce that the premiers had agreed to set aside their own demands for constitutional reform and begin exploratory talks based solely on Quebec’s proposals.

The so-called Edmonton Declaration was a critical first step for Bourassa. The declaration also reinforced the policy of Prime Minister Brian Mulroney, who has made a constitutional accord with Quebec one of his Conservative government’s top priorities. In a confidential letter last month,

Mulroney asked the premiers to delay their constitutional demands until the Quebec issue was solved. But beneath the display of unity in Edmonton, some premiers had serious concerns about reopening the complex problem of accommodating Quebec’s desire for special constitutional powers. Newfoundland’s Brian Peckford, for one, said that the proposed constitutional talks were still in doubt. Said Peckford: “I wouldn’t bet any money on it one way or another.” Still, the premiers unanimously agreed to give precedence to considering Quebec’s demands. Those include an explicit recognition of Quebec as a distinct society, increased power over

immigration policy, a greater say in Supreme Court appointments, limits on federal spending power in areas of provincial jurisdiction and the right to veto constitutional amendments. But the premiers also gave notice that they would later pursue their own constitu-

tional objectives on such matters as Senate reform, fisheries jurisdiction and property rights.

Bourassa arrived at the conference facing strong opposition. Senior aides to the Quebec premier told Maclean's that it became clear during a tour of provincial capitals by Quebec officials in June that the nine other provinces did not want to abandon the principle of strict legal equality. That principle was enshrined in the 1981 accord that

led to the 1982 proclamation of the Constitution without Quebec. As a result, Quebec officials devised a proposal that would give the province veto power without appearing to give it special legal status. At a private luncheon in the navy-blue-and-grey Egbert Room of Government House, Bourassa proposed that the existing amending formula requiring approval by seven provinces representing at least 50 per cent of the Canadian population be changed to seven provinces representing 75 per cent of the population. Bourassa said that the “Canadian formula” would ensure that no single region would be left out of the amending process while giving Quebec the power to block unwanted constitutional changes. But later Rémillard said that Quebec wants to retain veto power in perpetuity regardlesss of whether its population share—now barely over 25 per cent—declines.

The premiers reacted cautiously to Bourassa’s formula, which Rémillard will explain further during a series of meetings with provincial ministers next month. The formula’s population requirement would also give veto power to Ontario and to the four western provinces acting together. Nova Scotia’s John Buchanan, for one, said that he would not consider a formula that gave any single province a veto. Still, Quebec officials said that they were prepared to be flexible. Said a senior Bourassa aide: “Our five points are a minimum position, but there can be adjustments within that minimum.” In Ottawa, Senator Lowell Murray, minister of state for federal-provincial relations, welcomed the Edmonton Declaration. But he said that Ottawa will want a signal that there is a clear chance of provincial acceptance before agreeing to formal negotiations.

Bourassa said his initiative was a gamble: “That is political life—to face challenges.” Meeting that challenge— and ending Quebec’s exclusion from the country’s defining document—will require a formidable compromise. 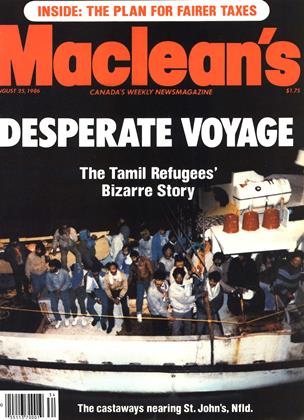