The village of Baddeck, N.S., hugs the northwest shore of scenic Bras d’Or Lake in the heart of Cape Breton Island. A resort for wealthy U.S. tourists, the stately streets in the community of 2,000 are lined with lacy elm trees and gingerbread houses. Baddeck’s affluence contrasts markedly with the rest of Cape Breton, where the official unemployment rate stands at 23 per cent. For the past two years the village has distinguished itself in another way: it has hosted the largest annual performing arts celebration in Atlantic Canada, the Centre Bras d’Or Festival of the Arts. Despite a humble location in the Baddeck High School gymnasium, this year’s event, which opened on July 18 and ends on Aug. 10, has attracted such prominent performers as jazz flutist Moe Koffman and Cape Breton folksinger Rita MacNeil. But organizers have something even more ambitious in mind: they are planning to make sleepy Baddeck home to a major regional cultural centre and arts school. Declared Centre Bras d’Or’s executive director Silver Donald Cameron: “It is a big, bold, exciting dream—but it’s doable.” Certainly, the festival’s accomplishments are impressive, especially considering its meagre budget of $150,000. The current celebration, 10 days longer than the inaugural 1985 event, opened with a crowd-pleasing mixture of song and skits, The Cape Breton Summertime Revue. This week playwright and actor Alan Williams takes the stage with his one-man play, White Dogs of Texas. American folksinger John Se-

bastian will follow. Cameron says he is confident that the second festival will almost double last year’s attendance of 4,550 and lend his plans for the proposed centre “visibility, and some record of achievement.”

So far, the educational centre exists only on paper. But a study commissioned by the centre and completed last month reported that it would be economically feasible to open a seasonal school for music, writing, theatre, crafts and arts administration. Cameron, 49, a writer who has lived in Cape Breton for 15 years, noted that the

study recommends bold use of federal incentives for investment on the island. But the internationally known 54-year-old Banff Centre in Alberta, the institution on which the Maritime centre would be partially modelled, boasts a $21-million annual budget, provided by the province and private sources. Creating even a scaled-down version of that, Cameron admitted, “will take inspired fund-raising and cunning manoeuvring.”

For Baddeck, becoming a minor mecca for writers, musicians and other creators could well be a lucrative new dimension to its established, if somewhat exclusive, tourist trade. Among its better-known visitors are members of Gilbert Grosvenor’s family, best known for running the U.S. National Geographic Society. They have summered there since 1909, when a famous relative, inventor Alexander Graham Bell, launched the Silver Dart airplane from Bras d’Or Lake to make the first

powered flight in the British Empire.

The idea of creating a permanent cultural centre has its critics. James St. Clair, a teacher at the University College of Cape Breton, is an expert on the island’s Scottish culture. He said that he worries about the organizers’ goal of making the centre a “worldclass” facility. “Cape Breton’s own inherent culture is like a fragile woodland flower,” said St. Clair. “I am concerned that looking at world-class entertainment is suggesting to local art that it isn’t valuable.” For his part, Paul Fleck, president of the Banff Centre, says that the project needs grassroots support to survive. He said: “Your base is the people in your own backyard. If you are not doing what they need, nobody will come.”

Many observers say that Cameron’s enthusiasm and dedication are among the centre’s principal assets. Said Joseph Sherman, editor of the quarterly periodical ArtsAtlantic: “If anybody can pull it off, he can.” For now Cameron is closely watching ticket sales. When he sits down with the festival’s board of directors next month to map out plans for the Centre Bras d’Or, those box-office results could well determine the fate of his dream. 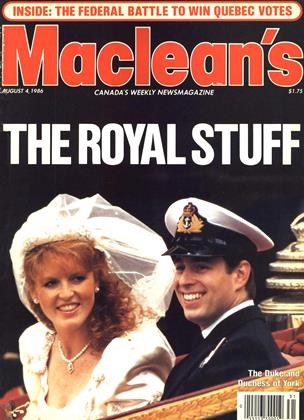