It was a Wednesday, the day Parisian mothers take their children shopping, and people bustled along the rue de Rennes on Paris’s Left Bank. Suddenly, at 5:30 p.m., two moustachioed men sped by in a black BMW and tossed a bomb onto the sidewalk. The blast devastated a discount clothing store and showered the street with glass. “Blood was everywhere,” said witness Annette Kahn, whose office was above the blast site, “with everything, even cars outside, totally destroyed.” A three-year-old boy sat alone and stunned; the lower part of his leg was gone. In all, five people were killed and more than 60 injured in last week’s attack. It was the fifth and most lethal terrorist bombing in Paris in 10 days, a savage spree of violence that left eight dead and 170 hurt. Despite official outrage and a spreading police dragnet, the terrorists appeared able to strike with uncanny— and chilling—efficiency, turning the City of Light into a city under siege.

Committee for Solidarity with Arab and Middle Eastern Political Prisoners (CSPPA). Lebanese in origin, it is demanding the release of three terrorists being held in French jails. Although it has not officially claimed responsibility for the clothing-store attack, the group has been linked to 12 bombings dating back to December, 1985. The stepped-up campaign began after French authorities refused to meet the group’s Sept. 1 deadline for the prisoners’ release. The government has reiterated its refusal despite the violence, and last week Prime Minister Jacques Chirac promised a “crushing and unflinching” response to the terrorists, whom he called “the barbarians of the modern age.”

The crackdown came on several fronts. In an attempt to seal French borders, authorities began to require visas for all foreign visitors entering France except citizens of the other 11 European Community countries and Switzerland. In Parisian stores, restaurants and other public places—increasingly empty as a palpable sense of panic set in after the clothing-store

bombing—police opened bags and conducted body searches. Authorities also offered an unprecedented one-millionfranc ($210,000) reward for information on two brothers of the most prominent of the prisoners, Georges Ibrahim Abdallah, who were believed to be in France and were suspected in the attacks. But as police put up wanted posters, the two Abdallah brothers, Maurice, 23, and Robert, 20, called a news conference in the Lebanese city of Tripoli and insisted that they had not been to Paris in two years. Said Maurice: “We haven’t done anything.” Some French officials say that the terrorists’ cold-blooded professionalism indicates that they may be trained and supplied by foreign governments, possibly Iran or Syria. Beyond the desire to free Arab prisoners in Paris, the officials say, the terrorists’ sponsors want to force France to reduce its role in the Middle East. The French currently take part in the peacekeeping force in Lebanon and supply arms to Iraq in its war with Iran. The anti-French violence is not confined to Paris. Last week in

East Beirut, three men shot and killed a French military attaché, Col. Christian Gouttière, outside the French Embassy. And at week’s end five soldiers were wounded during a rocket attack on a French battalion. That brought the total number of French casualties in Lebanon over the past two weeks to five dead and 34 wounded.

To French conservatives, Paris’s rash of bombings is the inevitable price of the country’s liberal immigration policies of the past. Even before the Socialists came to power in 1981, the country had acquired a reputation as a land of asylum, accepting dissidents from around the world, including Spain’s Basque separatists, Italy’s Red Brigades and assorted Middle East factions. The unspoken agreement appeared to be that while the activists might fight their political battles elsewhere, they would leave France terrorfree. “We thought we could buy a little peace,” a senior French police official said last week. “We were wrong.” Georges Ibrahim Abdallah, now 35, was one Arab terrorist who spent considerable time in France in the early 1980s. A left-wing Lebanese Christian, Abdallah is the suspected leader of the Lebanese Armed Revolutionary Faction, which has strong ties to Syria. In October, 1984, he was arrested in Lyons in connection with the 1982 murders of Lt.-Col. Charles Ray, a military attaché at the U.S. Embassy in Paris, and Yacov Barsimantov, second secretary at the Israeli Embassy there.

While Abdallah was still in custody the following March, his supporters kidnapped Gilles Peyrolles, the director of the French Cultural Centre in Lebanon, and apparently arranged to trade him for Abdallah. Peyrolles was released 10 days after his kidnapping. But by then French police had found a Paris apartment rented to Abdallah—

and, inside, the Czech-made pistol used to kill Ray and Barsimantov. The French backed out of the exchange.

In July a Lyons court sentenced Abdallah to four years in prison for illegally carrying weapons and false identity papers. He has also been charged and is awaiting trial for the two murders. With the sentencing, his supporters in the CSPPA, who had carried out sporadic bombings in Paris in the preceding months, took up the task in earnest. Along with Abdallah, the group wanted to free Anis Naccache, serving a life sentence for a 1980 assassination attempt on former Iranian prime minister Shahpour Bakhtiar, and Waroujan Garbidjian, an Armenian terrorist sentenced for life after planting a 1983 bomb at Paris’s Orly airport.

On Sept. 8 a bomb went off in a post office at Paris’s city hall, killing one person and injuring 18. Four days later an explosion destroyed a suburban cafeteria, injuring 41. On Sept. 14 the bomb site was a restaurant on the Champs Elysées, and the death toll was one. The following day—after Chirac announced his new antiterrorist campaign—the terrorists ridiculed

him by planting a bomb in the city’s central police headquarters. The blast killed one person and injured 51.

In a statement issued in Beirut, the CSPPA challenged the government’s ability to stop its violence. “Let Chirac know that we are stronger than all his departments,” the group declared. “We are capable of dealing one blow after another.” The clothing-store bombing appeared to prove that point two days later, and it was particularly indiscriminate: the store is popular with immigrants, including many Arabs. Last week the streets of Paris were studded with hulking grey police vans. Cafés and subways were nearly deserted. “It was bad a week ago,” said one shop owner. “But in the past few days it is terrible.” Despite the war-zone atmosphere, the French seem to support the government’s resolve to combat the terrorists. In a national poll last week, 70 per cent of respondents said that Abdallah should not be released.

Last week Chirac postponed his scheduled visit for this week to Ottawa, Montreal and Quebec City to manage the antiterrorism campaign at home. Outside the country, the new visa requirements caused a bureaucratic nightmare for travellers and French consular officials. In Montreal, where about 800 people leave for France daily during the peak summer season, French vice-consul Bernard Monnier said that in the first three days of the new program the consulate received about 2,000 phone calls a day and issued more than 1,000 visas. Consul officials were preparing to hire extra personnel to handle the crunch. Said Monnier: “It has been a little bit crazy in here.”

In Paris the overriding questions were where and when the terrorists would strike next. Police say that they believe that the guerrillas, who have twice failed in attempts to bomb the subway, will likely try there again. The terrorists have also vowed to attack the Elysée Palace. Last week they even threatened to export their terrorism further. In a statement to an independent newspaper in Beirut, the CSPPA warned that the United States, which has pressed France not to release the prisoners, would be the next target of attack. “We shall get acquainted with your great states, your cities, your skyscrapers, your Statue of Liberty,” said the statement. “Your streets will soon know us.” In the streets of Paris, people already know the terrorists’ work all too well. Police insiders say that it may be months before any real leads materialize, suggesting that the city’s time of fear and frustration could stretch uneasily toward winter. 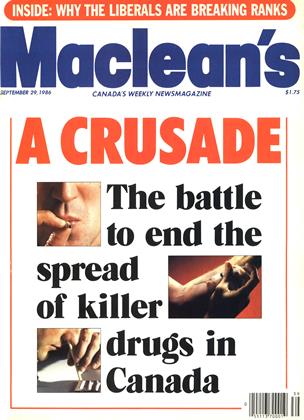