During the hockey season, Vancouver’s Pacific Coliseum is home to the Vancouver Canucks and their boisterous fans. But last week one of the world’s most celebrated opera companies transformed the cavernous hockey palace into a sumptuous auditorium with black curtains and gold and red arches. As part of the Expo 86 World Festival, Milan’s La Scala company unveiled Giuseppe

Verdi’s rarely heard 19th-century epic I Lombardi alla Prima Crociata (The Lombards in the First Crusade). The company faced the challenge of filling 6,700 seats for six evenings, and appealing to both tuxedoed opera-lovers and blue-jeaned curiosity-seekers. In the end, a combination of rock-concert technology and the legendary talents of La Scala’s 264 artistic members and 85 technical staff forged a glittering success. Said company conductor Gianandrea Gavazzeni, 77: “We Italians have many faults, but we have the ability to adapt.”

Purists sneered at staging an opera in an arena, but they could not fault La Scala for lack of innovation. For the first time in the company’s 198year history it used subtitles to pro-

ject translations of the opera’s Italian libretto onto two giant video screens, which also carried images of the onstage action. Still, what made the evening unforgettable were opera’s traditional elements—lavish costumes, grand sets and stirring music.

A complicated saga of international conquest and family feuding, of starcrossed lovers and religious conversions, I Lombardi marked La Scala’s

first appearance in Canada since it performed Verdi’s Nabucco at Montreal’s Expo 67. I Lombardi involves two brothers, Arvino and Pagano, and their rivalry for a woman named Viclinda. Although Viclinda chose Arvino long ago and bore him a daughter, Giselda, Pagano has never overcome his passion for Viclinda— nor forgiven his brother. One night, he attempts to murder Arvino, but kills their father by mistake. The tortured Pagano is then exiled to the Holy Land. But when Arvino journeys there to fight in the Crusades against the Moslems, Pagano, disguised, helps him gain a major victory.

for the dramatic emerged in Act II, which opens with a view of the colonnades of a sultan’s palace. Then, a grey canvas backdrop falls, and the action shifts to a cave nearby, where Pagano (sung by Paul Plishka in a dark and subtly shaded bass) is mourning his banishment. Suddenly, the canvas rises again to reveal the full 116-member chorus, dressed as warring crusaders in white tunics,

some on wooden horses, others carrying weaponry and banners. Led by Arvino—the resonant tenor Ezio Di Cesare—the crusaders sing of their coming battles, filling the stage with their rousing sounds.

La Scala’s soloists were as powerful as the chorus, particularly Bulgarian soprano Ghena Dimitrova. As Giselda, she displayed exquisite control in a dizzying series of arias which provided the opera’s musical highlight. The cost of bringing such talents to Expo 86 also soared—to an estimated $3 million. For the Milanese, I Lombardi was an audacious high-tech gamble. For opera lovers in a hockey rink, La Scala came, sang—and scored. 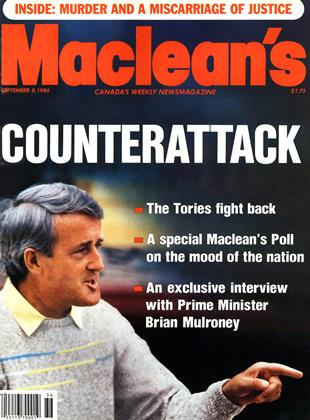