He is, by all accounts, not an easy man to work for. Throughout his career as an auto industry executive and now as president of the embattled Canada Post Corp., Donald Lander has set high standards—and demanded that others live up to them. That policy has not always won Lander the affection of associates and employees, but it has usually earned their respect. And none who know him question Lander’s complete dedication to whatever job he takes on. “Lander thinks, eats, breathes and sleeps Canada Post,” said Donald Swanson, the post office’s general manager of operations. “He’s determined to make it work.”

Reputation: Lander, 62, was born in Oshawa, Ont., home of General Motors of Canada Ltd. But he made his mark in the auto industry with Chrysler Corp., joining the sales department of Chrysler’s Canadian subsidiary in 1959 and rising steadily through the ranks. Gordon Pfeiffer, a Chrysler vice-president and longtime friend, remembers him as “a real salesman, very gregarious, very much a dealer’s man. When he drove, he always had one hand on the wheel and one hand on the car phone.” In 1970 Lander was transferred to Britain and became head of Chrysler’s European operations. There he dealt with more than a dozen entrenched and militant

unions—foreshadowing his current confrontation with striking postal workers. Still, he won the respect of unionists. Said William Lapworth, who negotiated with Lander on behalf of British Chrysler workers: “We found him very reasonable and very fair.”

In 1979 Lander reached what should have been the pinnacle of his career: becoming president of Chrysler Canada Ltd. in Windsor, Ont. But less than a year later the U.S. parent company’s new chief executive, Lee Iacocca, conducted a wholesale purge of Chrysler’s front office, and Lander, then 55, left the company. Undaunted, he went to work for the flamboyant John De Lorean, who was struggling to start his own auto company in Northern Ireland. The venture collapsed in 1982 after De Lorean was charged with possession of cocaine—he was subsequently acquitted— but Lander, the firm’s managing director, emerged with his reputation intact. In Grand Delusions, a 1983 book on De Lorean, author Hillel Levin wrote that Lander was “one of the few people in the entire company who won praise from all factions.”

After returning to Canada, Lander became Canada Post’s chief operating officer in 1984 under then-president Michael Warren. It was a perfect job for Lander. While Warren concen-

trated on selling the company to the public and the politicians, Lander quickly displayed his own special genius for day-to-day management. He introduced new containers to ease mail handling and set new performance standards.

Tough: Some employees contend that Lander takes his determination to extremes. André Villeneuve, Canada Post’s vice-president of communications, acknowledged that Lander “is a tough guy. There are no ifs, ands or buts for him. If you have to deliver something, you’d better deliver.” Another official put it more bluntly: “He can be a son of a bitch. People are 2 scared of him.”

At the same time, associates say that Lander does not spare himself. At night, he takes home a sheaf of computer printouts that give a snapshot of how the nation’s mail moved that day. The next morning, he expects a full summary of overnight operations on his desk before 8:30 a.m., when he meets senior staff members.

Disastrous: There have been other criticisms of Lander, whose undisclosed salary is in the $175,000-$200,000-a-year range (well above the Prime Minister’s salary of about $130,000). He has displayed none of the public relations skills of Warren, who worked tirelessly to improve Canada Post’s image. Lander, in contrast, has buried himself in balance sheets and flow charts, refusing almost all requests for interviews (including one from Maclean’s last week). And Lander has shown none of Warren’s political instincts—a potentially disastrous failing in Ottawa. “Warren wasn’t too good on operations, but he understood how government works and how to manipulate politicians,” said one former Canada Post executive. “Lander doesn’t.”

Indeed, on the rare occasions when Lander has testified before parliamentary committees, he has annoyed MPs by giving vague and jargon-ridden answers to their questions. But associates say that Lander gets along well with Harvie Andre, the minister responsible for Canada Post, and has his support. Clearly Lander will need that backing—and more—in his efforts to solve Canada Post’s tangled problems. 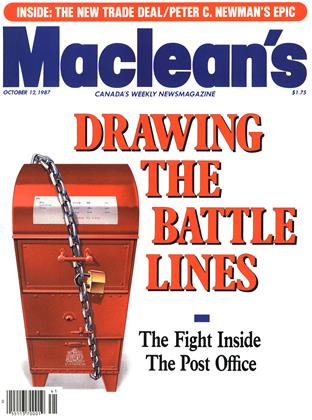