How The NDP Would Govern MADELAINE DROHAN August 3 1987

The expressions of concern have been shrill —and often appear exaggerated. An NDP government in Ottawa, Conservative party president William Jarvis declared in a letter to Tory supporters last May, would implement policies that would lead to a “Soviet-style” economy. On the other side, disaffected leftists have cautioned that the NDP in power might shy away from radical policies that they have worked for—and some have already urged the party not to waver. Said Richard Johnston, an NDP member of the Ontario legislature noted for his left-wing views: “This is not the time to be watering things down to prove we can be as liberal as the Liberals.”

The growing criticism from both ends of the political spectrum is fuelled by the NDP’S unprecedented popularity—and has focused new attention on a question seldom asked seriously in the past: what would a federal NDP government actually do once in power? Ticking away like a time bomb at the

centre of the debate is the party’s 269page book of policy resolutions. The book, a compendium of resolutions passed since 1961, has proved excellent fodder for critics, who cite its controversial resolutions. Among them: one calling for the nationalization of a major chartered bank and another that

Bell Canada and mining and resource firms as proof of the NDP’S radical bent. And although NDP Leader Ed Broadbent has tried to silence his critics by saying that the economic sections will be updated, his assurances led only to new charges of political opportunism.

In an interview with Maclean's last week,

Broadbent brushed aside those criticisms,

saying that although the party has an obligation to update its policies, “we will not make a change simply because something is deemed to be more susceptible to majority support.” A party official privately told Maclean's that the effort “to tidy up the book” is being made now because in the next election campaign, “Ed doesn’t want to have to defend resolutions from 1965.” Broadbent himself said that if he found himself in power tomorrow he would move immediately on tax reform, job creation, environmental concerns and a child care program. Here is what voters could expect from an NDP government in those areas: Tax reform: Historian Desmond Morton, a former member of the NDP’S federal council, describes tax reform as the party’s “sexiest issue.” The NDP would go much further than Finance Minister Michael Wilson did in his recent white paper, shifting more of the tax burden g from individuals to cor5 porations. NDP industry ^ critic Steven Langdon s said in an interview I that any reform “has to f involve a serious reduc* tion in taxes for ordinary Canadians.” To that end, Langdon said that such corporate tax concessions as the deduction for interest on money borrowed for takeovers would be eliminated, and the $100,000 capital gains tax exemption would be limited to small businessmen and farmers.

Job creation: The NDP would declare full employment to be a major

to job creation. Langdon said that government representatives would sit on the boards of major corporate recipients, both to ensure that job creation targets were met and to help implement a national industrial strategy similar to those of Japan and Sweden.

The environment: On international issues, an NDP government would take a much harder line with the United States on acid rain and cleaning up the Niagara River dump sites, which environment critic William Blaikie said are “threatening the drinking water of seven to eight million Canadians.” At home, the NDP’s top priori-

ty would be strengthening the Canadian Environmental Protection Act, which is now before the House, and increasing the powers of the environment department.

Child care: All three parties say that they plan to make child care a major part of their next election campaign. The NDP policy, outlined by Vancouver East MP Margaret Mitchell in an April report, includes direct federal grants to the provinces to build more day care facilities. The party’s long-term goal is making child care a universal right, like medicare and education.

Observers say that an NDP govern-

ment would likely move quickly in at least two other areas:

Defence: According to Winnipeg pollster Angus Reid, this could prove to be Broadbent’s “Achilles heel.” Reid said that the party’s resolve to withdraw Canada from the NATO alliance and use troops now in Europe to increase security at home, particularly in the Arctic, would go against the view of many Canadians “that Canada has an historic role to play in NATO.” Defence critic Derek Blackburn said further that an NDP government would seek to revise the NORAD defence pact with the United States to ensure that Canadian military aims receive more attention.

Broadbent also faces a split in his party between such MPs as External Affairs critic Pauline Jewett, who emphasizes disarmament, and those, including Blackburn, who want to increase conventional forces. Historian Morton said that an NDP position paper on defence, to be released shortly, will propose measures that might even lead to a bigger defence budget. Declared Morton: “There’s nothing wimpy about it.”

Free trade: The NDP has strongly opposed negotiations with the United States from the beginning because of the possible job losses that could result from a free trade deal—and would call an abrupt halt to the talks as soon as it won power. Langdon said that an NDP government would focus instead on such multilateral forums as the General Agreement on Tariffs and Trade as a way to protect Canadians from punitive American trade laws. But he added that the party does favor a joint Canada-U.S. agency to give nonbinding decisions on cross-border trade disputes.

With a federal election not expected for at least a year, the NDP has time to refine and reorganize its policies. However, Broadbent will be under increasing pressure—both from the Tories and Liberals and from many of his own followers—to define the party’s priorities. Among members of the two major parties, there is a sense that the New Democrats, as front-runners in the polls, are now the common enemy. Said Tory MP Donald Blenkarn: “In the next session of Parliament, we will be putting their feet to the fire more often.” But NDP federal secretary Dennis Young scoffed at the threat. Said Young: “If they attack the NDP, the way they have run the country, we need not have any more than the normal anxieties.” 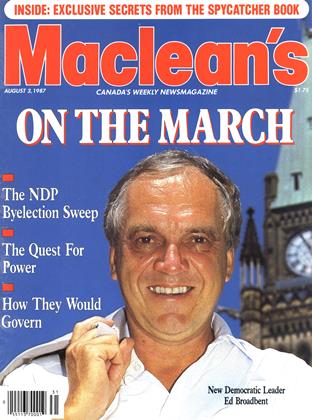