It was a bleak moment on both sides of the border. On a chill afternoon in January, 1987—with the White House still reeling from the revelations of the twomonth-old Iran-contra scandal—a letter landed on the desk of Vice-President George Bush. In it, Prime Minister Brian Mulroney chronicled his own political woes. With his standing in public opinion polls at a then-record low, Mulroney complained that White House foot-dragging on its acid rain commitments was undermining his government. Bush not only personally phoned Mulroney that afternoon to reassure him, but the next day he also walked into the Oval Office to ask for President Ronald Reagan’s blessing for a quick trip to Ottawa to boost the Prime Minister’s sagging fortunes.

That four-hour visit—from which Bush emerged to declare gamely that he “got an earful” from Mulroney—eased criticism of the Prime Minister at home. And Bush went on to lead the fight within the administration to salvage $3 billion in funding promised for an

acid rain study. In fact, Bush’s aides relate the anecdote as an example of how strongly a personal appeal can move the man who will become the next U.S. president. Analysts from both countries also see it as a demonstration of the knowledge and sensitivity Bush brings to the special Canadian-American relationship.

Nor is it the only favorable omen. Bush made a pledge to fight acid rain one of his chief campaign themes. And his newly named secretary of state, James Baker, personally hammered out the final details of the Canada-U.S. free trade agreement while treasury secretary. Still, as many Canadians predict a new, even warmer bilateral climate, other voices offer a more cautionary forecast. Pointing out that Bush will face a hostile Democratic Congress, Paul Heinbecker, political minister at the Canadian Embassy in Washington, declared: “The American people have again elected two governments. It doesn’t make it easier to advance Canadian interests when you have people in conflict with each other.”

In fact, analysts predict that the real impact of Bush’s election on Canada may hinge on the

outcome of the Nov. 21 election. From the campaign trail, Mulroney—who telephoned Bush in Houston the night of his victory— praised him as “a great friend of Canada for many years.” And Liberal Leader John Turner sent him a congratulatory letter the next morning, although it contained no mention of the free trade deal. Instead, Turner assured Bush that, if elected, he would co-operate “to ensure that the relationship between our two nations is harmonious and productive.” And later, Turner told reporters that, if he won, he would explain to Bush that Canadians turned down the deal as a “radical change in direction that didn’t meet our sense of sovereignty.”

Charles Doran, director of Canadian studies at Washington’s School of Advanced International Studies, said that some U.S. officials are perplexed by the Canadian election campaign. “John Turner is well-known by the policymakers down here,” said Doran. “But they know the old John Turner. I’m not so sure they know the new John Turner.” He predicts that Baker, having spent political capital on the free trade deal, is unlikely to want to reopen negotiations. Added Doran: “There won’t be any punitive efforts. They’ll just say, ‘Well, we tried. Now, we’ll look somewhere else.’ ”

But Myer Rashish, former undersecretary of state for economic affairs, warned that a Liberal victory could reawaken U.S. fears of a return to such Trudeau-era protectionist measures as the Foreign Investment Review Agency. Said Rashish: “That kind of thing could poison the atmosphere.” But both Doran and Rashish deny Mulroney’s contention that tearing up the free trade deal would provoke a backlash against Canada on acid rain. As Adèle Hurley of the Canadian Coalition on Acid Rain predicted: “The free trade agreement will not be the reason for the United States to spend billions of dollars cleaning up the air. We’ll get an acid rain agreement because Americans don’t like the air they breathe.”

Other analysts argue that strong relationships between leaders can mollify the sometimes-stormy winds of international affairs. Former Canadian ambassador to Washington Peter Towe recalls an incident during the Reagan administration’s first formal White House dinner in 1981 when Barbara Bush caught sight of Towe’s wife, an old friend. Breaking protocol, the vice-president’s wife stepped out of the receiving line and threw her arms around Carol Towe. Over the next year, the ambassador lunched frequently with Bush at Washington’s Alibi Club. “I always found him extremely well-briefed, warm and friendly,” said Towe. “Bush was very favorable on issues relating to Canada.” But Towe cautioned against expecting too much from a man whose primary job is to protect American interests. “Sometimes we get the feeling up here that if we get someone in the White House who knows Canada, is bright and a nice guy, he’s going to be soft on us,” said Towe. That might be an unrealistic hope. But in the case of Bush, he added, “what we can hope for is wisdom.” 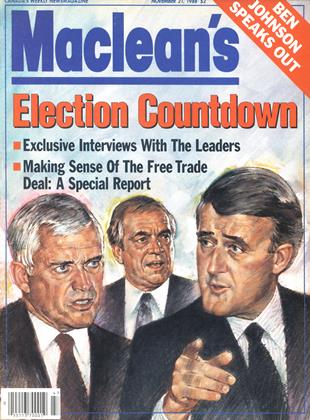