After two weeks of trying to form an elusive coalition government, Prime Minister Yitzhak Shamir finally won the support last week of religious parties that hold the balance of political power in Israel. But their backing did not come cheaply: Shamir’s right-wing Likud bloc had to agree to certain controversial conditions, including a change in the definition of who is a Jew. Under the current Law of Return, children of Jewish mothers and all converts have a right to claim automatic Israeli citizenship. But the religious parties want the state to refuse automatic citizenship to anyone converted to Judaism by non-Orthodox rabbis.

Shamir’s endorsement of that proposal created an immediate outcry. Secular Israelis inundated President Chaim Herzog’s office with mail denouncing the proposed coalition, while Canadian and American Jews—who are mainly non-Orthodox and provide vital political and financial support to Israel—made their own impassioned appeals. A change in the “who is a Jew” law, said a statement by a coalition of 21 American Jewish groups, would “inflict enormous damage, actual and symbolic, on the Jews of the Diaspora.”

Apparently having second thoughts, Likud leaders soon began to negotiate with their main rivals from the centre-left Labour Party. Neither party won a clear majority in the 120-seat Israeli Knesset (parliament) in the Nov. 1 elections, but, plainly believing that Likud had a better chance to form a government, Herzog had asked Shamir to try. But by week’s end, Likud and Labour— which have ruled Israel in a “national unity” government since 1984—had failed to reach an agreement, leaving Israel’s political future very much in doubt.

The uncertainty could not come at a worse time: not only has the intifadeh, or uprising, continued to rage in the occupied territories, but, last week in Algiers, the Palestine Liberation Organization (PLO) declared an independent Palestinian state, increasing the diplomatic pressure on Israel. Now, says Rabbi Gunther Plaut of Toronto’s Holy Blossom Temple, the prospect of a change in the Law of Return “will cause a polarization and division, which is just about the last thing Israel needs, especially in

the face of the very real challenges created by the PLO.”

Members of four Orthodox religious parties, which won 18 seats in the Knesset—up from 12 seats for religious parties in the last election—adhere strictly to centuries-old Jewish laws and customs. In addition to a change in the

Law of Return, they were demanding a ban on everything from soccer games to public transportation on the sabbath, as well as more money for religious schools. And they appear unwilling to compromise. Asked whether he would consider dropping demands for changes in the “who is a Jew” law, Rabbi Menachem Porush, the 72-year-old parliamentary leader of the ultraorthodox Agudat Yisrael, one of the major religious parties, told Maclean’s: “This discussion is over. If all the members of the coalition will not sign an agreement to vote for the change, Shamir will not have a coalition.” The religious parties have the staunch support of several Orthodox groups in North America. Rabbi Zalman Grossbaum of the Lubavitch Hasidic community in Thornhill, near Toronto, says that because all factions accept Orthodox conversions, “it’s the one position that all Jews could live with.” Any negative

response in Canada will “subside rather soon,” he predicts. The leader of the Lubavitch movement, 87-year-old Rabbi Menachem Mendel Schneerson of Brooklyn, N.Y., even took the unprecedented step of asking his followers in Israel to campaign for Agudat Yisrael before the vote. Boasted Rabbi Yehuda Krinsky, Schneerson’s personal aide: “So effective was the campaign that it shook the world.”

Most secular Israelis, however, oppose a narrow coalition between Likud and the religious parties. Teddy Koliek, the veteran mayor of Jerusalem, said a change in the Law of Return would polarize Jewish people around the world. “It will alienate them from the state of Israel and from Jerusalem,” said the 77year-old Labour politician. “This danger will also threaten the national consensus that Jerusalem is the capital of Israel and the heart of the Jewish people.” In North America, the majority of Jews come from Conservative or Reform backgrounds. And while the law would only directly affect converts, many Jews argue that it would indirectly strike a blow against non-Orthodox rabbis and religious groups worldwide.

But experts were divided over whether such objections would be enough to drive Shamir away from the religious parties—and back into the arms of Labour. In their discussions before the weekend, observers said, Shamir insisted that Labour come on board as a junior partner. By Shamir’s terms, he and Labour leader Shimon Peres would not rotate the premiership as they have for the past four years. And Peres would have to drop his plan for an international peace conference and swallow Shamir’s alternative: direct talks only with neighboring Arab states and acceptance of Israel’s right to sovereignty over all the occupied territories. But Peres demanded parity with Likud, including two of the top three cabinet posts under Shamir. And he knew that if he compromised, his own ministers would accuse him of a sellout. Said Peres: “We are not negotiating to become a junior partner.”

Most observers now say that it may be weeks before a coalition is formed. Meanwhile, many North American Jews plan to keep fighting any change in the Law of Return. A deputation of leaders representing more than 20 mainstream American Jewish groups are planning to fly to Jerusalem on Nov. 27 to plead their case with Israeli officials. “We are heading for a showdown,” predicted Harry Wall, the Jerusalem-based Israeli representative of the Anti-Defamation League of B’nai Brith. “The Americans know that if they’re going to win, they have to fight it out here.” 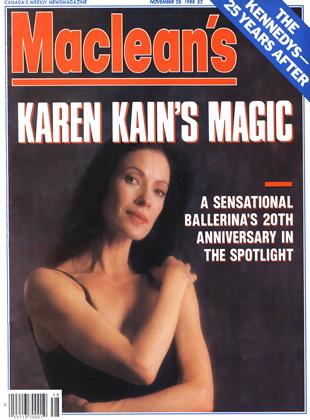