Most Canadians cherish the old chestnut about the American tourist who arrives in Canada for his summer holidays with his skis strapped to the roof of his car. In the minds of many foreigners, the country is a perpetually snowbound Great White North. But when the international athletes congregate at the Calgary Olympics, they may be surprised to find that a balmy chinook has blown winter away. Last October workers at the Nakiska resort on Mount Allan, 90 km west of Calgary, began toiling, trying to create a thick, firm base of artificial snow. “We’re operating on the assumption that we won’t get snow,” Alfred Fischer, volunteer chairman of the alpine events at Mount Allan, said late last year. “Any we get from Mother Nature is gravy.” Fischer and his helpers had good reason to plan for the worst. At the women’s World Cup races last March, chinooks transformed Mount Allan into what the media dubbed “Mount Mushmore.” Gusting as high as 110 km/h, the winds sent the temperature up to 14° C, melting the artificial snow, and blew away 1,500 m of safety fences. One race was cancelled and others were delayed, but they were eventually held on slushy, muddy slopes. The tempest, which one sports reporter called “a meteorological Godzilla,” also stunned World Cup officials. As he stood in melting snow, Heinz Krecek, a technical director of the Internationale Fédération de Ski (FIS), declared, “We heard about the wind and the warm weather and what it could do, and today we have the answer.”

The freakishly warm temperatures of 1987 were the second highest on record, and Environment Canada predicted aboveaverage temperatures and possibly minor chinooks for the Winter Games. Even as Nakiska’s computer-controlled snow hydrants pumped full blast on a nightly basis, balmy October temperatures melted some of the base. By early December only the slalom runs were covered. Many members of the Canadian downhill ski team were frustrated about losing the opportunity to train on Mount Allan. But Olympic officials refused to panic. Michael Collins,

venue manager at Nakiska, felt confident that a well-insulated base would withstand higher temperatures by February.

Mount Allan was never a popular choice for the Winter Games. Of the four mountains considered, it is the most vulnerable to chinooks. But Mount Allan appealed to Peter Lougheed, then Alberta’s premier. Lougheed planned to develop a provincial park in the area to rival Banff National Park. As well, the premier desperately wanted a ski resort to complement the provincially funded Kananaskis Golf Course. Against widespread opposition, the Alberta government spent $25 million to create Nakiska, and Olympiques Calgary Olympics (oco) added $5 million. Bulldozers excavated 25,000 cubic metres of rock, enough to fill 13 Olympicsized swimming pools. But in 1985 Serge Lang, founder of the World Cup ski circuit, complained that the course was not up to international standards. Following similar criticisms, the courses were widened and grades sharpened. As a result, most critics revised their assessment. Marc Hodler, president of FIS and a member of the International Olympic Committee, described Mount Allan as “one of the world’s foremost downhill courses.”

With a huge investment in Nakiska, oco has refused to designate a backup site in nearby Banff, where the snow conditions are more reliable. In fact, oco even took over the mountain in November rather than in January and paid $4.4 million to make up for Nakiska’s lost revenues. The logistics of moving the athletes and media would be daunting. “You can’t take an event and simply plump it down into a non-Olympic venue,” says oco spokesman Terry Steward. “At worst, we’d cancel after postponing for a few days.” As a last resort, the Alberta government would use helicopters and trucks to cover the mountain with snow. No matter what the cost, officials are determined to deliver a white Olympics. 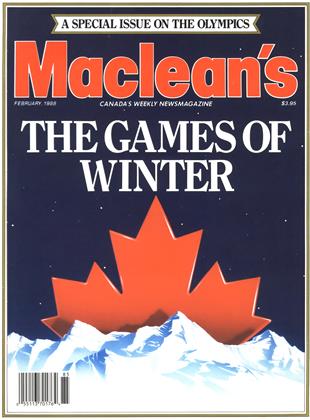