The symbolism was unmistakable. Until his defeat at the polls last Oct. 13, New Brunswick’s former premier Richard Hatfield kept a government-owned 10 -seat Beechcraft turboprop plane for his frequent trips outside the province. But when Liberal Leader Frank McKenna succeeded Hatfield, he immediately announced plans to sell the plane and curb what he termed “arrogant and extravagant" government spending. Three weeks ago the 40-year-old McKenna made good on his promise, selling the twin-engine plane to Air Vendée, a regional airline in France, for $731,000. Declared McKenna last week in an interview with Maclean's'.

“We kept our word. That is extremely important because we are going to be asking New Brunswickers to follow us in some difficult decisions.”

Indeed, McKenna’s willingness to tackle difficult issues in his first five months in office has had provincial and national repercussions. Within New Brunswick, he has won public praise for a series of belt-tightening measures on spending and for his efforts to open up the legislative process after his party’s sweep of all 58 seats in the legislative assembly. Nationally, McKenna provided an important boost to Prime Minister Brian Mulroney when he broke with federal Liberal Leader John Turner and Ontario Liberal Premier David Peterson to announce his support of Mulroney’s free trade agreement with the United States. But he has not yet signed the Meech Lake constitutional accord and retains the power to scuttle the agreement, which must be adopted unanimously, if he does not sign by 1990. With hearings on constitutional amendments due later this year, McKenna has said that he plans to push for a revision of the agreed-upon amending formula and for increased protection for women and linguistic minorities.

At home, McKenna has won his strongest support for his efforts to establish a more austere style of govern-

ment. Under Hatfield, the Conservatives won a reputation for lavish spending that angered many voters. By contrast, McKenna has imposed stringent personal spending guidelines on himself and government members. McKenna and his cabinet ministers now fly economy-class and book no-frills hotel rooms. Entertainment expenses, including liquor and cigarettes, can no longer be claimed on expense accounts.

And many government civil servants in the premier’s office building in downtown Fredericton have begun arriving at work by 7:30 a.m. — when McKenna usually begins working days that average 16 hours.

Meanwhile, voters have praised McKenna for the manner in which he has governed without

an official opposition. After the electoral shutout of the Conservatives and the NDP, his government announced measures designed to let public-interest groups and other political parties make their views known more easily. The legislative library is open to the public for the first time, and the budget of its research department has been increased by $200,000 to enable it to meet the new demand. And the government has committed itself to referring all major legislation, including the provincial budget, to committees that will travel the province to solicit opinions. When the legislative assembly is in session, Conservative and NDP officials will be allowed to hold news ^ conferences in the legis_ lature. As a result, McI Kenna says that his gov-

ernment will be even more democratic than others have been in the past. “By creating better access and being more open, we can actually turn a disadvantage into an advantage,” the premier said. “We are prepared to make absolutely anything public.”

Still, both the NDP and the Tories have sharply questioned that commitment to open government, citing McKenna’s refusal to provide either party with the $350,000 that New Brunswick has previously given for the funding of an opposition leader’s salary and office. Instead, the Tories will receive $232,000 and the NDP, $85,000—figures based upon provincial legislation allowing them $1.99 for each vote they received in the election. Declared Elizabeth Weir, executive director of the NDP: “It is hypocritical to say you are for open government and then not give the resources.”

The two opposition parties are still regrouping after their rout at the polls. Following the resignation of NDP Leader George Little last week—after failing to win a seat in the past two elections—neither of them has a permanent leader. The Tories, who formed New Brunswick’s government for 17 years under Hatfield, are now struggling both politically and financially. Hatfield, who resigned on the night of the election, has since spent much of his time abroad and has made only sporadic public appearances. The interim Conservative leader, 60-yearold former Moncton-area businessman and former legislative assembly member Malcolm MacLeod, is struggling to hold the party together until a leadership convention is held in 1989. Last week the Tories gave up their traditional party headquarters in Fredericton’s stately Lord Beaverbrook Hotel and now share an office with the federal Tories in a converted downtown house. Still, MacLeod insists that the party’s electoral wipeout has had some positive effects. Declared MacLeod: “It does tend to open up the party.”

For his part, with the assembly opening on March 22 after a nine-month break, McKenna has set the discussion of the Meech Lake accord and job creation as his priorities. The province’s unemployment rate of 13 per cent is the third highest in Canada, and he is also aiming to reduce the province’s accumulated debt of $2.5 billion. Faced with those tasks, McKenna insists that he seldom even has time to reflect on the changes in his life since the election. “It is almost embarrassing, but I have never had a chance to really sit down and reflect on the fact that I am the premier of New Brunswick,” he said. “I am still numbed.” 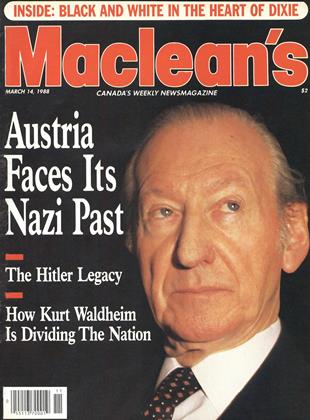