It is a kaleidoscope of images, lyrics and slogans, a mental scrapbook so vast and vivid —so deeply embedded in the collective consciousness—that its pages turn almost by themselves. The Age of Aquarius. “Power to the people” and “Let it all hang out.” Miniskirts and marijuana and John, Paul, George and Ringo, and draft dodgers streaming across the Canadian border. It was, for North Americans, a period of wide-eyed political love affairs, from Camelot to Trudeaumania, and of unprecedented public trauma:

John Kennedy, Bobby Kennedy, Martin Luther King Jr., the FLQ in Montreal —the names alone conjure up the horror of the gun and the bomb. The era was as wild as Woodstock, as frivolous as singer Tiny Tim, as deadly serious as a body bag back from Vietnam. It took people as high as the moon and as low as the My Lai massacre, featured the larger-than-life Muhammad Ali and the slimas-a-knife Twiggy. Love it or leave it —good vibes or bad—the 1960s, viewed even in starkest hindsight, remain less a decade than a state of mind, a magical mystery tour through the memory bank of a generation.

Of late, professional nostalgiapushers have been taking the tour in droves. Hot in pursuit of the Woodstock generation—now greying baby boomers with money to spend—they have transformed the tempestuous 1960s, even more than the innocent 1950s, into an advertising, movie and television trend for the 1980s. But they are selling a sanitized 1960s at best. With the notable exception of the spate of Vietnam films, the period’s current incarnation is largely a feel-good phenomenon, long on youthful fun and freedom, reducing the entire decade to a kind of continuous rock V roll sound track. Conspicuously underplayed are the turmoil and tragedy that came to a head 20 years

ago in momentous 1968—in short, the remarkable reality of the era.

There's something happening here, What it is ain't exactly clear.

In November, 1959, Maclean's published its own ideas about what the 1960s would be like—with decidedly mixed success. “Morality will generally be less strict,” the magazine declared with supremely understated foresight. However, no less an authority than U.S. anthropologist Margaret Mead, paraphrased in the article, predicted a tightening of family ties and less development of individuality. On the international stage, the magazine hedged its bets. It foresaw “no war but no real peace either”—and potential trouble in Asia.

The seeds of that trouble were evident early in the decade. In 1961 Washington

quietly sent military advisers to South Vietnam and, the following year, loudly—and successfully—demanded that the Soviets remove their missiles from Cuba. But if the 1960s are a state of mind, then they arguably began not at their literal inception, but on Nov. 22, 1963. The assassination of President John F. Kennedy—the horrifying scene of his head snapping back in the convertible in Dallas, later replayed on television-marked the 1960s generation like a brand. It rebuked innocence, obliterated Camelot and spawned a lasting obsession with where-I-was-when-Ifirst-heard remembrances. And it set the tone for the chaos ahead.

At the heart of much of the upheaval was a single foreign name: Vietnam. Vice-President Lyndon Johnson had advised Kennedy that “American combat troop involvement is not only not required, it is not desirable.” But during his own presidency, Johnson not only sent troops—more than 58,000 Americans were killed there—but became a man possessed. For the rest of North America, Vietnam came home over television: the fiery, blood-drenched images, the numbing references to “carpet bombing” and “body counts.” To many observers, especially among the draftage young, the TV war in Southeast Asia began to seem increasingly surreal—and senseless.

What if they gave a war

The antiwar movement escalated like the fighting itself. Beginning on U.S. college campuses, the succession of sit-ins, candlelight vigils and protest marches spread across the United States and to Canada as well. Draftevaders faked insanity or tampered

with urine samples, and as many as

80.000 young men came to Canada. At bottom was a kind of mass disillusionment, a distressing sense that a nation so unquestionably blessed—so cocksure of its historic rightness—could be so colossally wrong. The movement eventually swept over Johnson, who in 1968 announced that he would not run again. It spilled out onto the Chicago streets, where riot-clad police clubbed and tear-gassed protesters during the Democratic convention, and hounded Johnson’s Republican successor, Richard Nixon, throughout his first term. In fact, just as the 1960s can be said to have started in 1963, so they continued into the early 1970s. They encompassed the National Guard shootings of four students at Ohio’s Kent State University in May, 1970, and they arguably ended on the January day in 1973 when Nixon announced—however unconvincingly—that he had negotiated “peace with honor” in Vietnam.

Along the way, the age of change developed a style of its own. “All you need is love,” the Beatles sang in 1967, and a segment of young society—mostly children of the middle classseemed intent on proving it. Love-ins, communes, flower power: such were the buzz words of the counterculture. Gray Line buses lumbered through San Francisco’s Haight-Ashbury district to give goggle-eyed tourists a view of long-haired hippies in their natural habitat. Frantic parents scoured the streets of Toronto’s Yorkville and Vancouver’s Gastown searching for runaway teens. Even Margaret Trudeau called herself a flower child. Sex was groovy; so were drugs. Both were very much in evidence at a dairy farm near the New York town of Woodstock where, at a 1969 rock festival that became emblematic of the era,

ing the draconian War Measures Act, called out the army and suspended civil rights across the country. But Laporte was found strangled in the trunk of a car near Montreal, and Cross was released only after his abductors were granted free passage to Cuba. Ten terrorists eventually served time for their parts in the kidnappings and murder of the October Crisis. In the years to come, the fight for independence, led by René Lévesque, would be fought not in the streets but in the national assembly.

Afar more widespread movement took hold in the United States. Buoyed by the eloquent dream and nonviolent tactics of King, the civil rights struggle picked up momentum in the early 1960s. The drive focused on the segregationist South, where blacks, braving a virulent barrage of verbal and often physical abuse, sat in at lunch counters and integrated schools. They won passage of the federal civil rights bill of 1964. But the gains did not stop northern ghettos from erupting into rioting in the long, hot summers of the mid1960s—and again after King’s murder in Memphis, Tenn., in 1968.

Nor did progress extend to economic equality, a goal that continues to elude American blacks even in 1988. Meanwhile, in the United States and Canada, the women’s liberation movement was also launched. Betty Friedan’s watershed work, The Feminine Mystique, was published in 1963. But although some consciousness was raised and a few beauty pageants picketed, the movement’s real breakthroughs would not come until the 1970s.

The answer, my friend, is blowin ’ in the wind.

The question, looking back over the decades, is what the 1960s’ legacy really is. The simplest answer is that its lessons—like those of the Vietnam War that dominated the period—remain largely in the eye of the beholder. To some, it remains a time of glorious idealism and exhilaration; to others, one of gross immorality and excess. The current nostalgia boom, skimming across the era’s surface like a flat stone skipped across a lake, will do little to alter opinions. It merely calls up the old images and lyrics, flashing them brightly—even psychedelically. Anyone over 30 will at least remember them. But for those too young to remember, growing up in more conventional times, the 1960s must surely seem far away. And far out. 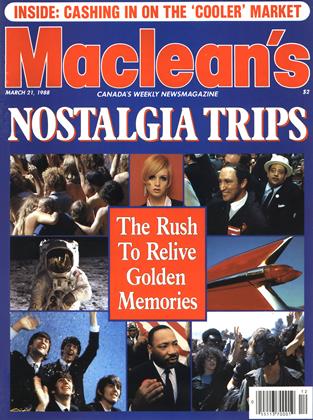