Lee was an only child, a curious and energetic eight-year-old boy. But after his parents separated early last year, Lee—who had been an average student in Aldergrove, B.C., near Vancouver—became inattentive at school. Then, in April, 1987, a psychiatrist diagnosed Lee as hyperactive and put him on daily 10mg doses of an amphetamine-like drug called Ritalin. As a result, Lee paid more attention to his studies.

But his mother, Linda, recalled: “I gave my son a hug one day and I could feel his heart beating like crazy, racing. It was really alarming.” During the four months that he was taking the drug, the boy also became increasingly moody and withdrawn, and he complained of headaches and stomachaches—side effects about which Linda, 38, said that she had never been informed. Her concerns underscored a controversy that has been growing in both the United States and Canada about whether or not doctors should be prescribing Ritalin to control children’s behavior.

Lee is one of an estimated 40,000 to 50,000 Canadian children—most of them male—who have been diagnosed as hyperactive and who are being treated with Ritalin. First brought onto the Canadian market in 1956 to treat narcolepsy, a disorder in which people suddenly fall asleep, Ritalin did not come into use as a treatment for hyperactive children until the late 1960s. Many experts say that the drug—which has a calming effect on

young children—can improve the behavior of hyperactive children in as many as 66 per cent of cases. But other people say that they want the drug banned. That opinion is reinforced by the fact that Ritalin—the brand name for methylphenidate—has become one of the more popular street drugs in major western Canadian cities. Vancouver police Det. Gordon Spencer, for one, called it “a poor man’s substitute for heroin.”

The Citizens’ Commission on Human Rights, an international organization with 56 chapters that the Church of Scientology established in 1969, has spearheaded the campaign against the use of Ritalin for hyperactive children. The drug, manufactured in Canada by Toronto-based CIBAGEIGY Canada Ltd., is not recommended for use in children under the age of 6. But officials of the Vancouver branch of the commission say that they have documented about 12 cases of the drug being prescribed to children under 6 in their area alone. In one such case, according to Margaret Rommann, director of that branch, a girl was given Ritalin for 11 years, beginning at age 2. Rommann added that the child became so addicted that, at 13, she slashed her wrists because her psychiatrist had threatened to take her off the drug.

For his part, Dr. Russell Schachar, a child psychiatrist and director of the outpatient psychiatry department at Toronto’s Hospital for Sick Children, said that his main concern with

Ritalin is that it is too often used as a catchall solution for complex situations. Said Schachar: “The problem is that the bulk of the drug is not prescribed by psychiatrists, but rather by pediatricians and general practitioners.” He added: “People go to doctors who do not have a great deal of expertise or time, so it ends with a simple, pat solution, which works in the short run but in the long run is not so helpful.” Schachar maintained that it is too much to expect Ritalin to help some of the conditions for which it is prescribed. “Behavioral problems can be caused by anything,” he said. “A child may not sleep well because it’s too cold in his room or he’s too hungry.”

Schachar said that the most common side effects of the drug—including insomnia and appetite loss—usually disappear after the first two or three days or can be remedied with a smaller dosage. And despite what members of the Scientology-sponsored group say is evidence to the contrary, Schachar said that any formal studies he has seen on Ritalin have not shown it to be addictive when it is prescribed correctly. But according to Det. Spencer, Ritalin ranks fourth behind marijuana, cocaine and heroin as the drug used most on the streets of Vancouver, especially in poorer areas of the city. (A 10-mg Ritalin tablet sells for $20, compared to $35 for a capsule of heroin.) Indeed, skid row users sometimes mix Ritalin with a narcotic called Tal win and then inject the compound into their veins. Spencer added that many addicts turn to crime in order to get increasingly large supplies of the drugs.

In Aldergrove, Lee, now 9, has been off Ritalin since last July. And following a painful three-month period of withdrawal from the drug, his curiosity and his energy have returned. Like Lee’s mother, Linda, many people complain that the criteria for diagnosing hyperactive children are both too broad and too vague. Among the symptoms of hyperactivity in The Diagnostic and Statistical Manual of Mental Disorders, the American Psychiatric Association’s official manual, are “moves about excessively during sleep”; “has difficulty staying seated”; and “is always ‘on the go.’ ” But, said Rommann: “What child doesn’t do these things? It is all too easy to give them something—a quick fix.” It is a fact that many of the Canadian schoolchildren currently being treated for hyperactivity exhibit less disruptive behavior than before. But the cost at which teachers and parents can maintain peace and quiet remains open to question. 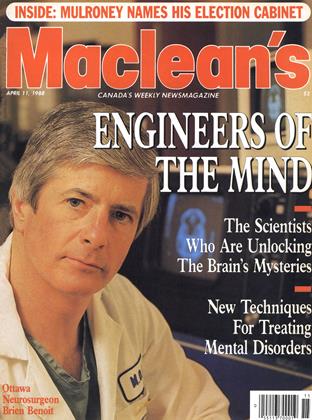