In the fall of 1947 a Hebrew journal published an article by Zalman Shazar, a future Israeli president, on the new nation that would arise in the land of Israel. One line of it sticks in my memory. “When the free Jewish state finally comes into being,” he wrote, “nothing will be as it was. Even love will not be the same.” Many states have been founded on political hopes. The state of Israel was born amid messianic expectations. Some dreamed of the actual coming of the Messiah, others that Israel would become a torch to guide all the nations of the world. Even atheistic Socialists spoke of “bringing about redemption.”

In the beginning of Zionism there was isolation and it gave birth to extremism, even madness. As a child before 1948 I was familiar with the deeply felt idea that “no one understands us,” first heard from people who came to tea with my father in our Jerusalem courtyard. There were Trotskyite and Marxist Zionists, Stalinist Zionists, right-wing nationalists and even a prophet or two. When I try to recall what they argued about, what they dreamed of, I remember one thing about which they all agreed: we are the few, we are the avant-garde of a revolution, and after we succeed nothing will be the same.

Such dreams must lead to disappointment, and the story of Israel is no exception. We do have a free Jewish state, but love has undergone no great change. Some people I know take this philosoph-

Born in Jerusalem in 1939, Amos Oz is one of Israel's leading novelists and journalists. He was a member of a kibbutz for three decades and fought as a reservist in the 1967 and 1973 wars.

ically. Others say that it’s too hard to live with unfulfilled dreams; let us pretend that they have come true.

People around the world view the Zionist enterprise as they would a man walking along the narrow ledge of a skyscraper. There are those who applaud and admire. But what is the crowd waiting for if not a false step? As for the man on the skyscraper, he doesn’t want the crowd to know that he hadn’t meant to walk on the ledge. He wanted to stand on top of the skyscraper, like a universal monument, and he is beginning to discover that he will never get there.

Moral: There are still many who feel that Israel should be at the top or not exist at all. We should be the most moral nation in the world. We should not

break up demonstrations the way the Germans or French do because once we were shut up in ghettos. We must not rule over another people because we went through the gas chambers, as if the gas streamed showers of morality upon their victims.

Many in Israel measure the country against the original dreams of its Zionist founders. And truly, in comparison to those dreams, there has never been a failure like the Zionist one. But if Israel is compared instead to the 159 members of the United Nations, it will be found among the 30 states in which a man can use his vote to toss his government to the winds, can call it names and satirize its leaders. If that is the yardstick, then Israel is a moral and political success. Nonetheless, I get no joy from this comparison.

Our clearest achievement is cultural. There is hardly an Israeli who is not

interested in ideas. There is involvement in culture, sometimes a neurotic or aggressive one, that never stops. On the eve of the 1967 war I was serving on the Egyptian front. I sat with a few people around a campfire knowing that war would probably break out the next day. Out of the darkness the front commander appeared and began to unfold his scenario. After three or four sentences he was interrupted by a chubby, bespectacled corporal. “Excuse me,” he said, “have you ever read War and PeaceV’ The general was insulted. “Of course I’ve read it,” he retorted. “Do you realize,” said the corporal, “that you are about to repeat exactly the same mistake that Tolstoy says the Russians made in the Battle of Borodino?”

Within seconds the entire platoon was engrossed in a fiery debate about War and Peace, morality and strategy. It turned out that the corporal was a lecturer in Russian literature at Tel-Aviv University; the general had a degree in philosophy from Jerusalem.

Drama: If someone asked me why I live in Israel, rather than move to Europe or North America, my answer would be that here I find myself in an open drama. The most terrible things could happen here, but they don’t have to happen. Terrible and wonderful things can happen simultaneously. The ambitions of the creators of Zionism have their shadowy side in the arrogance toward the Palestinians. The struggle is still going on in Israel over whether the country can be one of the most beautiful in the world, or whether it will turn into a cruel and oppressive one.

I do not agree that the occupation of the territories in 1967 was what corrupted Israel or destroyed the Zionist dream. The long war with the Arabs, predating the creation of the state, did that. A war lasting 85 years defiles both sides. One nightmare that haunts me is that this war may become all-consuming. Neighborhood against neighborhood, individual against individual. Such a state of mind exists now in the occupied territories but not in Israel itself, and the sooner we get out of the territories the better. We must end the conflict with the Arabs, even at a high price— although not at any price.

We will not sit down with the Arabs to rake over the past. We must sit down together to plan the future. What are the possibilities, we must ask, what can be salvaged from the avalanche? □ 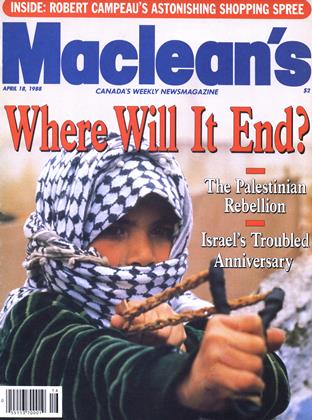