The gruelling and sometimes acrimonious meeting in Toronto’s Central Technical High School lasted 10 hours. When it was over, 31-year-old Tony Ianno, a political aide on leave from Ontario Premier David Peterson’s office, had won the Liberal nomination for the redistributed federal riding of Trinity-Spadina. In a stunning upset, he had defeated John Roberts, 54, a former Liberal leadership candidate and immigration minister in the government of Pierre Trudeau. Ianno—young, untried and virtually unknown outside local party circles and the Italian community —had toppled a blue-blooded member of the party establishment with a national reputation. But upsets have become increasingly common in a city where growing immigrant communities are demanding a larger role in Canadian democracy. Declared Elvio Del Zotto, the federal Liberal party’s newly elected Ontario president: “It is a natural evolution of this country as a multicultural nation.” He added: “I think it is fabulous.”

Del Zotto is a leading representative of the rising political power of ethnic Canadians.

The wealthy real estate developer is a second-generation Italian-Canadian, whose bricklayer father immigrated to the country in 1927. But the expanding influence of Del Zotto, 53, and of a growing number of other Italian, Greek, Portuguese and East Indian politicians, has roused resentment among some members of the party’s long-established Old Guard. In addition, Del Zotto is at the centre of a swirl of hostile rumors fuelled both by his own take-charge attitude since winning the party’s Ontario presidency in March and by his role as a witness before a royal commission investigating Ontario construction industry violence in the 1970s. And both developments have added new pressure to the party’s already strained unity.

Those concerns did not dampen the elation at Ianno’s May 1 nomination victory. Ianno supporters, along with cheering friends and family, jumped out of Central Tech’s red-cushioned auditorium seats to surround the newly minted candidate following the announcement of his second-ballot

victory. It was a similar scene at Toronto’s Constellation hotel late last month when Joseph Volpe, a 40-yearold high-school vice-principal and close friend of Ianno’s, defeated sitting Liberal MP Roland de Corneille for the nomination in the neighboring riding of Eglinton-Lawrence. Both Volpe and Ianno planned to help

Portuguese-Canadian Armindo Silva this week when he competes with Italian-Canadian Albina Guarnieri for the nomination in the new riding of Mississauga East.

Elsewhere among the 23 federal ridings within Metropolitan Toronto, Jasbir Singh, a turbanned, 45-year-old Sikh, is challenging former Liberal national revenue minister Roy MacLaren, who is expected to run for his old seat in Etobicoke North. On the city’s eastern outskirts,

Greek businessman Jim Karygiannis is without an opponent in Scarborough-Agincourt, while the contest in another riding may be between two East Indians. As well, David Peterson’s 94-member provincial Liberal

The trend is a clear sign that immigrant communities are joining the Canadian mainstream. Noted Maria

Minna, a 40-year-old Italian-Canadian public affairs consultant and a candidate for the Liberal nomination in the Toronto-area riding of York North: “Until now the people running the country have been English and French. Other communities were establishing themselves.” But now, said Minna, “they feel mature enough to take leadership.” Added Ianno: “The people who used to be in charge practised a brand of politics that was from an Old Boys network, and Canadians of other origins were often overlooked. Our message is that there are fewer barriers than 15 or 20 years ago.”

wake. MP de Corneille was bitter at his loss to Volpe in Eglinton-Lawrence. “I won the nomination in 1979 and took the seat from a Tory,” de Corneille said last week. “I don’t think that the party should allow sitting MPs to be challenged for their nomination.” Others have criticized the tactic, employed by several ethnic candidates, of packing nomination meetings with newly registered Liberals recruited from their own cultural group. Said one senior veteran of the Ontario party: “What I really question is grouping people because of their ethnic origin and running them through the process for the purpose of having them count.

They are not there to become involved in the Liberal party; they are just being run through that mill.” In fact, the tactic might be counterproductive in some cases, enabling a candidate to win a nomination, but alienating other ethnic groups whose support would be needed for victory in a general election.

But that is a risk most ethnic candidates are willing to take.

Minna, for one, said that it was “inevitable” that candidates seeking nominations would seek support from members of their own ethnic communities. She added: “It is a numbers game. If you are running in a riding where there happens to be a large number of people from your cultural background, well, you are going to take advantage of it.” Said Del Zotto: “The Old Guard is always bruised. Those complaints come from disgruntled losers.”

The new president of the party’s Ontario wing, clearly, is not one of them. Indeed, even among the notably ambitious and hardworking firstand second-generation Canadians who make up the new wave of ethnic Liberals, Del Zotto’s is a conspicuous success story. One of his few failures was in university—where he spent too much time playing football and was forced to drop out of Queen’s University in Kingston, Ont. Another was a failed bid for a provincial Liberal seat in 1967. But in business, so-

ciety and the back rooms of politics, Del Zotto has amassed an impressive record. The family construction business—now renamed Tridel Enterprises Inc. —that he inherited with his two brothers, Angelo and Leo, is one of the largest builders in Canada, with revenues of $410 million in 1987. Del Zotto’s social circle includes such gilt-edged acquaintances as Conrad Black. And his path to the presidency was paved by rais-

ing $600,000 for the cash-starved Liberals with one well-organized dinner last October.

Despite that glittering résumé— and a commitment to raise another $3 million in contributions by the end of September—Del Zotto has attracted criticism. During his drive for the presidency, an energetic whisper campaign recalled his 1974 appearance before a royal commission investigating violence in the Ontario building industry. The inquiry followed a series of bombings and shooting attacks on construction companies in Toronto and Hamilton. In his report, tabled in the Ontario legislature on Dec. 19, 1974, Judge Harold Waisberg wrote that Del Zotto’s brother, Angelo, provided the name

of a key contact who introduced “a sinister array of characters,” many of them with associations to organized crime, into the industry. And he said that he was not satisfied by Angelo and Elvio Del Zotto’s answers to many of his questions.

Del Zotto’s management style since taking over the party’s Ontario office has led to new rumors. He acknowledges that he is demanding; others describe him as autocratic. “You don’t ask Elvio questions,” said one senior party member, “He tells you.” That has caused confusion about Del Zotto’s plans. Last week several senior party insiders claimed that he was preparing to move the Liberals’ Toronto offices from their present quarters just east of the city’s financial district into a building owned by Tridel where no rent would be charged. “The fear in people’s minds,” said one Liberal, who requested anonymity, “is what does he want in return? It sends out the wrong vibrations.” But Del Zotto told Maclean's that Tridel had not offered space to the party. Senior Liberals are clearly looking for results from Del Zotto. Said a top aide to federal leader John Turner: “He is a handson, hardball guy who delivers, whatever his critics say. If he tells his boss he can do something, he will deliver. He will go out there and kick ass.” Still, the speculation swirling around Del Zotto’s actions may exacerbate the distrust and poor communications that have upset the Liberal party for months. And it was clear that, while some members applauded the new generation of ethnic Liberals, their aggressive campaigns have left potentially damaging rifts with the party’s Old Guard. Tony Ianno urged Liberals in Trinity-Spadina last week, “Please, let’s stick together.” But his plea was too late to reach the ears of the vanquished John Roberts. Roberts had stalked out of the auditorium moments before the decision in Trinity-Spadina was announced, taking many of his supporters with him. 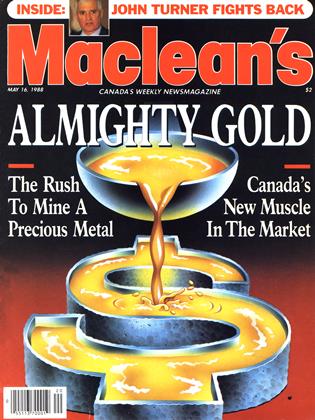